NY Times Calls Out Tom Siebel on Death of IT Claims

About six months ago, I blogged my notes from a speech given to the Alliance of Chief Executives by Tom Siebel, entitled From IT to ET (from information technology to energy technology). While I enjoyed the speech, I had a few problems with it:

Basically, it felt like his thesis was “IT is dead, long live ET” and any, uh, “facts” that contradicted it were overlooked or spun away. So I was happy to see this piece in the New York Times this morning, Are The Glory Days Long Gone for IT?, which challenges some of Siebel’s claims. 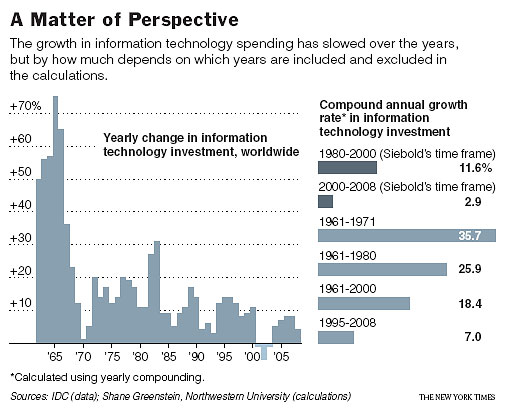 The chart above shows the peril’s of defining the world by one’s own experience. While Siebel characterized 1980-2000 — Siebel’s prime years — as the go-go years of IT, in reality, the fastest period of IT growth was between 1961 and 1971.

Timothy Bresnahan, a Stanford economist, similarly does not accept Mr. Siebel’s contention that the decline in growth rates this decade, which encompasses two recessions, signals a permanent end to I.T.’s record of growing faster than the larger economy. “It is early days to say the game is over,” he said.

When the economy recovers, there is no dearth of unfinished projects for I.T., he said, like “automating white-collar work and automating buying and selling in markets.”

To me, the latter point is critical. Rather than defining the future of the industry by its recent growth rate or by one person’s successes, we should define it in terms of work left to do. And from that perspective, there is plenty of work left and plenty of growth associated with that work.

Documents are stored redundantly. They’re not centralized in databases. They’re not re-used. They’re not controlled and managed by applications. They’re not analyzed. Compared to data, content is the Wild West. It’s my belief that this will change, and change radically, over the years to come.