It Ain’t Easy Making Money in Open Source:  Thoughts on the Hortonworks S-1

It took me a week or so to get to it, but in this post I’ll take a dive into the Hortonworks S-1 filing in support of a proposed initial public offering (IPO) of their stock.

This is a company that,  in the past three quarters, lost $54M on $33M of support/services revenue and threw in $26M in non-recoverable (i.e., donated) R&D atop that for good measure.

Let’s take it top to bottom:

Before diving into the financials, let me give readers a chance to review open source business models (Wikipedia, Kellblog) if they so desire, before making the (generally true but probably slightly inaccurate) assertion:  the only open source company that’s ever made money (at scale) is Red Hat.

Sure, there have been a few great exits.  Who can forget MySQL selling to Sun for $1B?  Or VMware buying SpringSource for $420M?  Or RedHat buying JBoss for $350M+?  (Hortonworks CEO Rob Bearden was involved in both of the two latter deals.)   Or Citrix buying XenSource for $500M?

But after those deals, I can’t name too many others.  And I doubt any of those companies was making money.

In my mind there are a two common things that go wrong in open source:

So Why Does Red Hat work?

And Red Hat set the right price point and cost structure.  In their most recent 10-Q, you can see they have 85% gross margins and about a 10% return on sales.  Red Hat nailed it.

But, if you believe this excellent post by Andreessen Horowitz partner Peter Levine, There Will Never Be Another Red Hat.  As part of his argument Levine reminds us that while Red Hat may be a giant among open source vendors, that among general technology vendors they are relatively small.  See the chart below for the market capitalization compared to some megavendors. 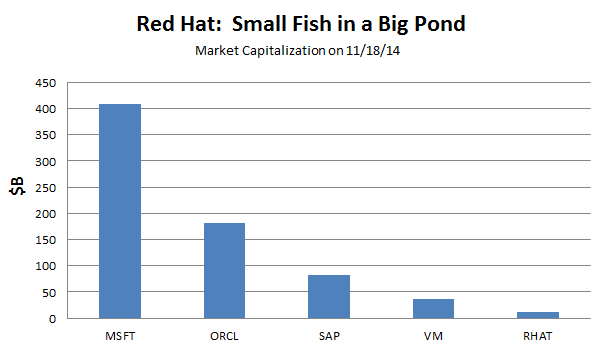 Now this might give pause to the Hadoop crowd with so many firms vying to be the Red Hat of Hadoop.  But that hasn’t stopped the money from flying in.  Per Crunchbase, Cloudera has raised a stunning $1.2B in venture capital, Hortonworks has raised $248M, and MapR has raised $178M.  In the related Cassandra market, DataStax has raised $190M.  MongoDB (with its own open source DBMS) has raised $231M.  That’s about $2B invested in next-generation open source database venture capital.

While I’m all for open source, disruption, and next-generation databases (recall I ran MarkLogic for six years), I do find the raw amount of capital invested pretty crazy.   Yes, it’s a huge market today.  Yes, it’s exploding as do data volumes and the new incorporation of unstructured data.  But we will be compressing it 10-20x as part of open-source-ization.  And, given all the capital these guys are raising – and presumably burning (after all, why else would you raise it), I can assure you that no one’s making money.

Hortonworks certainly isn’t — which serves as a good segue to dive into the financials.  Here’s the P&L, which I’ve cleaned up from the S-1 and color-annotated. 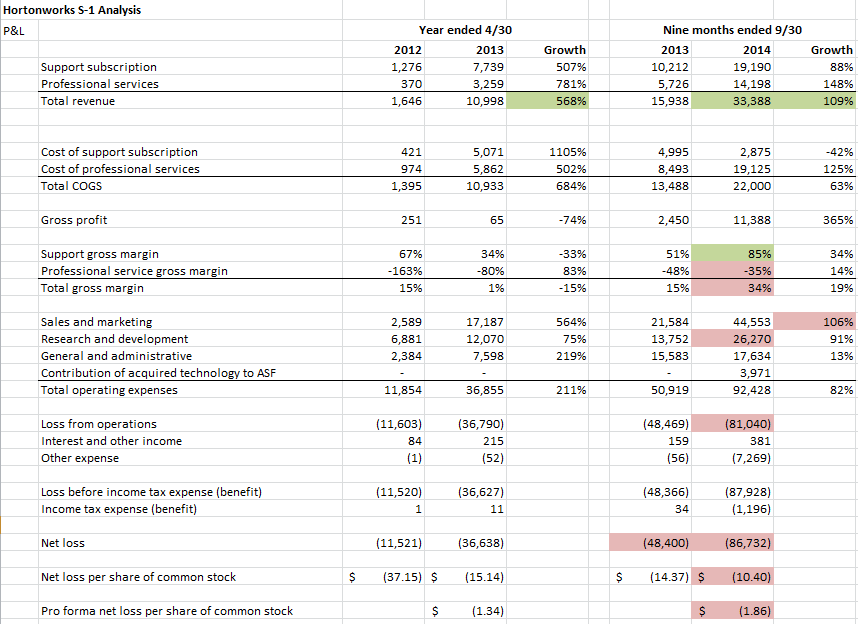 Here are some other interesting tidbits from the S-1:

Here’s a chart I made of the increase in value in the preferred stock.  A ten-bagger in 3 years. 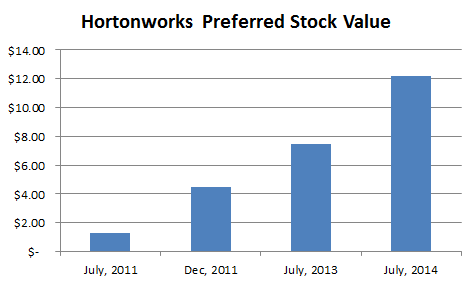 One interesting thing about the prospectus is they show “gross billings,” which is an interesting derived metric that financial analysts use to try and determine bookings in a subscription company.  Here’s what they present:

While gross billings is not a bad stab at bookings, the two metrics can diverge — primarily when the duration of prepaid contracts changes.  Deferred revenue can shoot up when sales sells longer prepaid contracts to a given number of customers as opposed to the same-length contract to more of them.  Conversely, if happy customers reduce prepaid contract duration to save cash in a downturn, it can actually help the vendor’s financial performance (they will get the renewals because the customer is happy and not discount in return for multi-year), but deferred revenue will drop as will gross billings.  In some ways, unless prepaid contract duration is held equal, gross billings is more of a dangerous metric than anything else.  Nevertheless Hortonworks is showing it as an implied metric of bookings or orders and the growth is quite impressive.

On this metric Hortonworks scores a 41% for the T3Q ended 9/30/14 compared to the same period in 2013.  JMP considers anything above 50% efficient, so they are coming in low on this metric.  However, JMP also makes a nice chart that correlates S&M efficiency to growth and I’ve roughly hacked Hortonworks onto it here: 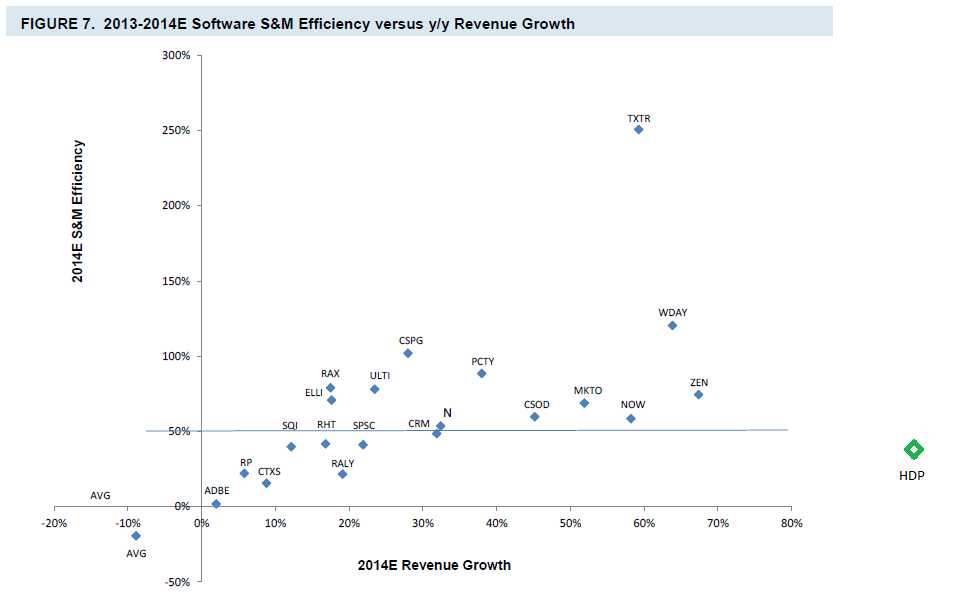 I’ll conclude the main body of the post by looking at their dollar-based expansion rate.  Here’s a long quote from the S-1:

This is probably the most critical section of the prospectus.  We know Hortonworks can grow.  We know they have a huge market.  We know that market is huge enough to be compressed 10-20x and still have room to create a a great company.  What we don’t know is:  will people renew?   As we discussed above, we know it’s one of the great risks of open source

Hortonworks pretty clearly answers the question with “we don’t know” in the above quote.  There is simply not enough data, not enough contracts have come up for renewal to get a meaningful renewal rate.  I view the early 125% calculation as a very good sign.  And intuition suggests that — if their offering is quality — that people will renew because we are talking low-level, critical infrastructure and we know that enterprises are willing to pay to have that supported.

In the appendix below, I’ll include a few interesting sections of the S-1 without any editorial comments.

We do not currently have vendor-specific objective evidence of fair value for support subscription offerings, and we may offer certain contractual provisions to our customers that result in delayed recognition of revenue under GAAP, which could cause our results of operations to fluctuate significantly from period-to-period in ways that do not correlate with our underlying business performance.

In the course of our selling efforts, we typically enter into sales arrangements pursuant to which we provide support subscription offerings and professional services. We refer to each individual product or service as an “element” of the overall sales arrangement. These arrangements typically require us to deliver particular elements in a future period. We apply software revenue recognition rules under U.S. generally accepted accounting principles, or GAAP. In certain cases, when we enter into more than one contract with a single customer, the group of contracts may be so closely related that they are viewed under GAAP as one multiple-element arrangement for purposes of determining the appropriate amount and timing of revenue recognition. As we discuss further in “Management’s Discussion and Analysis of Financial Condition and Results of Operations—Critical Accounting Policies and Estimates—Revenue Recognition,” because we do not have VSOE for our support subscription offerings, and because we may offer certain contractual provisions to our customers, such as delivery of support subscription offerings and professional services, or specified functionality, or because multiple contracts signed in different periods may be viewed as giving rise to multiple elements of a single arrangement, we may be required under GAAP to defer revenue to future periods. Typically, for arrangements providing for support subscription offerings and professional services, we have recognized as revenue the entire arrangement fee ratably over the subscription period, although the appropriate timing of revenue recognition must be evaluated on an arrangement-by-arrangement basis and may differ from arrangement to arrangement. If we are unexpectedly required to defer revenue to future periods for a significant portion of our sales, our revenue for a particular period could fall below  our expectations or those of securities analysts and investors, resulting in a decline in our stock price

Our early growth strategy has been aimed at acquiring customers for our support subscription offerings via a direct sales force and delivering consulting services. As we grow our business, our longer-term strategy will be to expand our partner network and leverage our partners to deliver a larger proportion of professional services to our customers on our behalf. The implementation of this strategy is expected to result in an increase in upfront costs in order to establish and further cultivate such strategic partnerships, but we expect that it will increase gross margins in the long term as the percentage of our revenue derived from professional services, which has a lower gross margin than our support subscriptions, decreases.

Our deferred revenue, which consists of billed but unrecognized revenue, was $47.7 million as of September 30, 2014.

Our total backlog, which we define as including both cancellable and non-cancellable portions of our customer agreements that we have not yet billed, was $17.3 million as of September 30, 2014. The timing of our invoices to our customers is a negotiated term and thus varies among our support subscription agreements. For multiple-year agreements, it is common for us to invoice an initial amount at contract signing followed by subsequent annual invoices. At any point in the contract term, there can be amounts that we have not yet been contractually able to invoice. Until such time as these amounts are invoiced, we do not recognize them as revenue, deferred revenue or elsewhere in our consolidated financial statements. The change in backlog that results from changes in the average non-cancelable term of our support subscription arrangements may not be an indicator of the likelihood of renewal or expected future revenue, and therefore we do not utilize backlog as a key management metric internally and do not believe that it is a meaningful measurement of our future revenue.

We employ a differentiated approach in that we are committed to serving the Apache Software Foundation open source ecosystem and to sharing all of our product developments with the open source community. We support the community for open source Hadoop, and employ a large number of core committers to the various Enterprise Grade Hadoop projects. We believe that keeping our business model free from architecture design conflicts that could limit the ultimate success of our customers in leveraging the benefits of Hadoop at scale is a significant competitive advantage.

International Data Corporation, or IDC, estimates that data will grow exponentially in the next decade, from 2.8 zettabytes, or ZB, of data in 2012 to 40 ZBs by 2020. This increase in data volume is forcing enterprises to upgrade their data center architecture and better equip themselves both to store and to extract value from vast amounts of data. According to IDG Enterprise’s Big Data Survey, by late 2014, 31% of enterprises with annual revenues of $1 billion or more expect to manage more than one PB of data. In comparison, as of March 2014 the Library of Congress had collected only 525 TBs of web archive data, equal to approximately half a petabyte and two million times smaller than a zettabyte.

[1]  Thinking more about this, while I’m not an accountant, I think the lack of VSOE has the following P&L impact:  it means that in contracts that mix professional services and support they must recognize all the revenue ratably over the contract.  That’s fine for the support revenue, but it should have the effect of pushing out services revenue, artificially depressing services gross margins.  Say, for example you did a $240K that was $120K of each.  The support should be recognized at $30K/quarter.  However, if the consulting is delivered in the first six months it should be delivered at $60K/quarter for the first and second quarters and $0 in the third and fourth.  Since, normally, accountants will take the services costs up-front this should have the effect of hurting services by taking the costs as delivered but by the revenue over a longer period.

23 responses to “It Ain’t Easy Making Money in Open Source:  Thoughts on the Hortonworks S-1”