“I am 100% behind my CEOs up until the day I fire them.” — Don Valentine, Sequoia Capital

I’ve always loved that Don Valentine quote although, like many great quotes, it took me a while to really understand it.  In short, it means that the board of directors should either support the CEO or replace them – there is no third option.  There is no board-runs-the-company option.  The CEO runs the company and the board’s only operating duty is to decide who is CEO.

Over time, I developed my own corollary:

“The CEO should be the most bullish person on the future of the company, up until they’re gone.” — Dave Kellogg

Fair weather or foul.  Making plan or missing plan.  Whether a megavendor just introduced a free directly competitive product or whether you just got a patent on a fundamental industry-enabling technology.  Whether the CEO is quite certain things are going to end well or whether they have some serious doubts.  It doesn’t matter.

I’m not saying CEOs should lie to people.  I am saying that no matter the situation they should always be the most bullish person in the room:  whether atop the mountain’s peak or neck-deep in shit, the CEO should always see the stars.  Why?  Because it’s their job.  The CEO’s job is to find the best path forward, period.  Regardless of whether that path looks easy or hard.

I’m not saying that CEOs shouldn’t be 100% realistic in situation assessment when devising their strategies.  While I’m not a huge fan of the book for many reasons, Good to Great produced an awesome rule that captures the spirit exactly in the Stockdale Paradox:  you must confront the brutal facts of your current reality and combine that with an unwavering faith in an eventual positive outcome.

The last thing a CEO wants is a bullishness inversion.  Imagine a scenario where the board felt much better about the future than the CEO.  You can almost hear them saying:  “gosh, I just don’t think Dave believes in the future of the company as much as we do.” That, by the way, is the boardroom equivalent of, “gosh, I think we need to invoke the Don Valentine rule and get a new CEO.”

I decided to write this post when I read the New York Times story on the sale of Good Technology to Blackberry.  While I think it’s a must-read story that makes some important points about unicorns, excess financing, dilution, and the potential divergence of interest between preferred and common stock, I think the story was a bit too hard on the Good Technology CEO and took some cheap shots that reflect a failure to fully understand the situation and the job of the CEO.

Before diving in, let me tell you a true story about the scariest flight I ever had.

I was bound for Paris, departing from SFO.  I was tucked nicely in my window seat, eager to dive into the latest Harvard Business Review.  Just after wheels-up I noticed that we took a steep angle of ascent.  I looked out at the wing and noticed little nozzles that I’d somehow never noticed before, and wondered “what are they for?”  Seconds later there was a loud thud and a big bump and white spray was flying out the nozzles.  “Oh yes,” I remembered, “those nozzles are for dumping the fuel IN AN EMERGENCY.”

Seconds later an absolutely nonchalant, The Right Stuff voice came over the intercom, “Ladies and gentlemen, this is Captain Smith up in the cockpit and we’ve had a little problem with the right engine — which has overheated — so we’re going to take a loop around, dump a bit of fuel, and land back at SFO in a few minutes.”

After an emergency briefing from the flight attendants and adopting the brace position, we had a perfect landing at SFO.

“Ladies and gentlemen, this is Captain Smith again.  You may have noticed the people on tarmac spraying foam on the landing gear.  That’s because we couldn’t thrust-reverse to slow down with only one engine, so we had to work the brakes extra hard and now they’ve overheated as well.  This is just a precautionary measure and we’ll have you at the gate in a few minutes.”

That sounded reasonable until I looked out the window and saw (roughly) this: 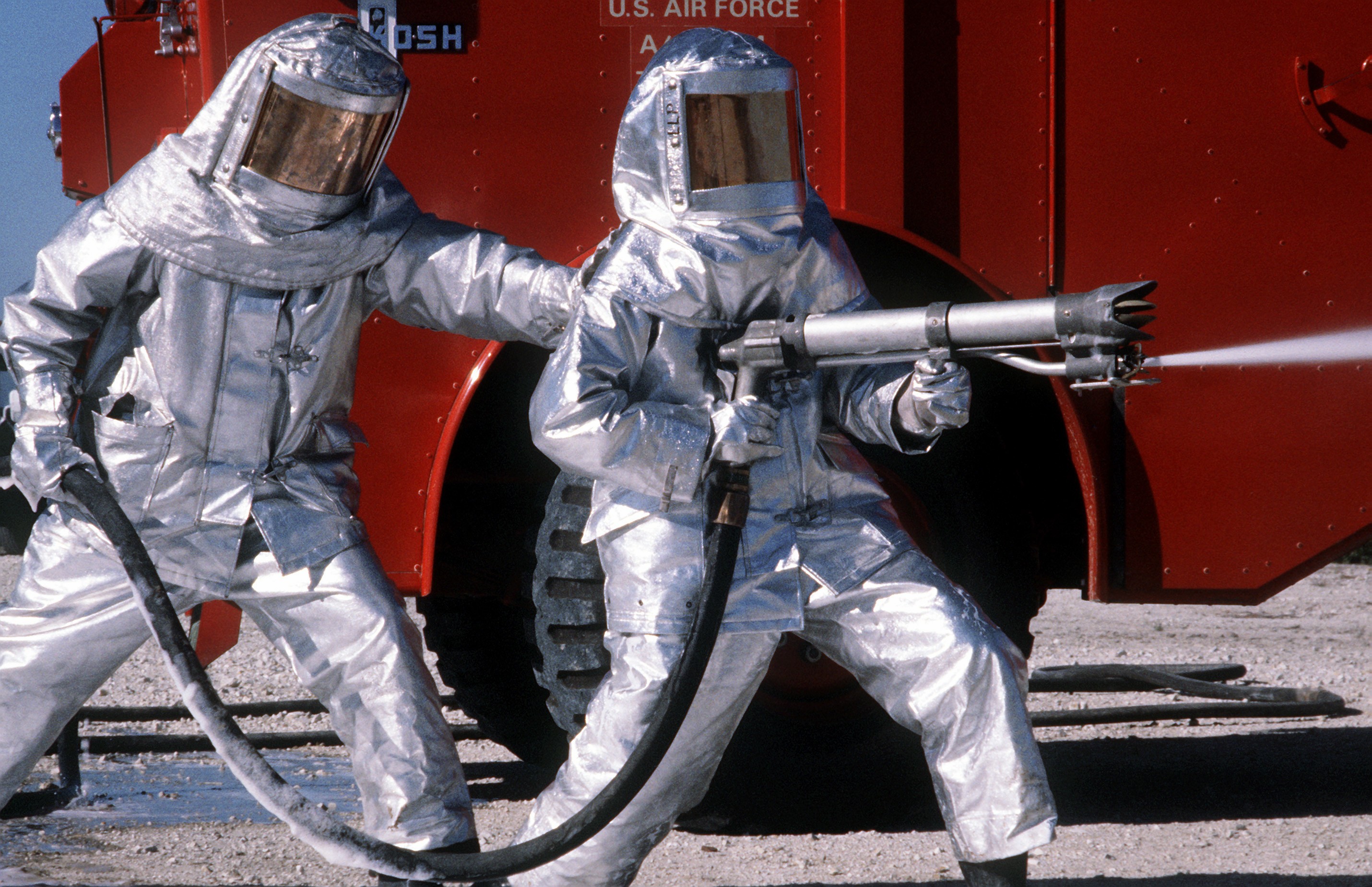 “OK,” I think, “so the Captain’s telling me everything’s fine but the guys on the ground won’t come within 50 yards of the plane while wearing a full-body silver flame suit.”  But nevertheless, given the Captain’s calm, I didn’t panic.

I thought it was a great example of professional communications keeping everyone both informed and calm in a critical situation.  Now maybe I’m a bad capitalist, but it never occurred to me to call Schwab while we were circling to buy some put options on UAL stock.

Imagine if the pilot had said:

“The right engine has exploded and we are a roman candle full of fuel that we have nowhere near enough time to dump, but we’ll dump what we can while we circle around, and then we are going to land way, way heavier than you’re supposed to, and I won’t be able to slow us down with the thrust reversers so the brakes are going to catch fire, and if they can put that fire out before any fuel leaks on it, then we’ll all be OK.”

Maybe then I’d have thought to buy those put options.  But maybe three people on the plane would have had heart attacks, too.

The pilot’s duty is to get the aircraft through the situation while informing the passengers in such a way that does not make the situation worse.  Whether the pilot knows the odds of success are 95% or 40%, they’re going to deliver roughly the same message.  The pilot’s job, notably, is not to offer financial advice — no one would posthumously sue the pilot for misrepresentation in saying “we’re going to get through this” when they didn’t and for thus denying passengers the opportunity to sell (or buy puts on) the airline’s stock.

Now, let’s flip back to the Good Technology story.  Look at these excerpts:

At a May company meeting, Ms. Wyatt said the company missed financial projections and addressed an email from a competitor that said Good would soon run out of cash …

At an all-hands company meeting in June, Ms. Wyatt again said Good was spending responsibly. Thanks to the cash from a recent $26 million legal settlement, she added, the company had “a ton of options”

I’d argue she was actually pretty transparent.  She told employees they were missing plan and that were it not for a one-time legal windfall they’d be in cash trouble.  She even gave them idea of the scale.  (A $200M breakeven company spends about $50M/quarter which means they were within about half a quarter, or 6 weeks, of running out of money.)

My question is simple:  what do you want her to say at those meetings?

Well that competitive email does some valid math and there certainly are scenarios where we run out of cash, which means we’ll probably have drastic layoffs.  We’re basically almost out of money now — we got lucky with that windfall from the lawsuit so we’re still able to make payroll.  Boy, the board and I sure feel stupid for declining that buyout offer from CA, but with a bit of luck we might get through this.

What happens then?  The employees start looking for jobs, the best ones find them first, so you start losing your best people — who you need to get out of the situation.  You also start losing deals to the competitor who is spraying FUD on you, which means you will have lower cash collections.  You make the situation worse.

But her job is to get the company through the situation, so if she sends the scarier message and makes the situation worse, then she’s not doing her job.  In addition, because her job is find a way through the maze, she probably genuinely believes that she can get the company to a reasonable outcome — and if she doesn’t believe that then, per my rule, maybe she shouldn’t be running the company.  You want a pilot in the chair who thinks they can land the plane.

This wouldn’t be much of a paradox were it not for the fact that Good was a private company that had an active secondary market in its stock.  This is the problem.  In short, we have a company following private-company communications practices with a public-like market in its stock.

Private companies don’t.  Historically they haven’t needed them because historically there were no secondary markets for private company stock.  In the old days, employees exercised options (1) when they left the company, (2) when they wanted to play a (dangerous) ISO buy-and-hold tax strategy that takes a year execute and is thus insensitive to short-term news, and (3) through a same-day sale once the company was public.

But with an active secondary market, employees can decide to either sell (or not sell) shares to a third-party at pretty much any time.  There is a complete dearth of information for buyer and seller in these secondary markets.  Most companies won’t release financial information to either party both because they want it kept private and they don’t want liability for any errors it might contain.  So they trade on rumor and hearsay.

And to think all this has happened as a result of the government trying to protect investors post-bubble and post-Enron with regulations like SOX.  In this case, pretty much the opposite has happened. Remember Ronald Reagan’s quote about the nine scariest words in the English language:  “We’re from the government and we’re here to help.”

If I were common stockholder of Good Technology, I’d be unhappy but not surprised about the outcome — when a company that’s raised $300M sells for $425M, it’s clear that they’ll be at most $125M for the common shareholders and quite possibly less:  if there’s debt to repay, multiple liquidation preferences, or if the preferred stock is participating.  I’d be upset about the board declining the buyout offers from CA and Thoma Bravo — but such mistakes happen all the time (e.g., Yahoo declining the Microsoft offer).

But I wouldn’t be mad at the CEO for being a calm pilot and trying to navigate through a difficult situation without making it worse.  She was doing her job.  Even neck-deep in shit, as she apparently was, she needed to be the most bullish person on the future of the company and find a way to a successful outcome.

And, in my opinion, in a perfect world, we’d roll back to the days when companies could go public at $30M (as we did at Business Objects) and eliminate a lot of problems created by pushing IPOs out much further out into a company’s lifespan.  For that is the root cause of the problem.

Postscript
Let me help my readers avoid some problems that Good Technology employees faced .  First, remember the dangers of ISO buy-and-hold strategies that many learned that hard way in Bubble 1.0.  Second, if you have stock-related compensation, you should learn the important basics about it by reading a book like Consider Your Options.  Third, you should always get advice from your tax and finance professionals before making any stock option moves.  Finally, remember that I am not offering financial advice and you should go here for a reminder of this and other Kellblog disclaimers.

This entry was posted in Leadership, Management, Startups, Venture Capital. Bookmark the permalink.