The single most misunderstood software-as-a-service (SaaS) metric I’ve encountered is the CAC Payback Period (CPP), a compound metric that is generally defined as the months of contribution margin to pay back the cost of acquiring a customer.   Bessemer defines the CPP as:

I quibble with some of the Bessemerisms in the definition.  For example, (1) most enterprise SaaS companies should use annual recurring revenue (ARR), not monthly recurring revenue (MRR), because most enterprise companies are doing annual, not monthly, contracts, (2) the “committed” MRR concept is an overreach because it includes “anticipated” churn which is basically impossible to measure and often unknown, and (3) I don’t know why they use the prior period for both S&M costs and new ARR – almost everybody else uses prior-period S&M divided by current-period ARR in customer acquisition cost (CAC) calculations on the theory that last quarter’s S&M generated this quarter’s new ARR.

Switching to ARR nomenclature, and with a quick sleight of mathematical hand for simplification, I define the CAC Payback Period (CPP) as follows:

All seems pretty simple, right?  Not so fast.  There are two things that constantly confound people when looking at CAC Payback Period (CPP).

Payback Metrics are for Risk, Not Return

Quick, basic MBA question:  you have two projects, both require an investment of 100 units, and you have only 100 units to invest.  Which do you pick?

Well, don’t you feel silly for picking project B?

There are situations where it makes a lot of sense to look at CPP.  For example, if you’re running a monthly SaaS service with a high churn rate then you need to look closely how long you’re putting your money at risk because there is a very real chance you won’t recoup your CAC investment, let alone get any return on it.  Consider a monthly SaaS company with a $3500 customer acquisition cost, subscription gross margin of 70%, a monthly fee of $150, and 3% monthly churn.  I’ll calculate the ratios and examine the CAC recovery of a 100 customer cohort.

While the CPP formula outputs a long 33.3 month CAC Payback Period, reality is far, far worse.  One problem with the CPP formula is that it does not factor in churn and how exposed a cohort is to it — the more chances customers have to not renew during the payback period, the more you need to consider the possibility of non-renewal in your math [1].  In this example, when you properly account for churn, you still have $6 worth of CAC to recover after 30 years!  You literally never get back your CAC.

Soapbox:  this is another case where using a model is infinitely preferable to back-of-the-envelope (BOTE) analysis using SaaS metrics.  If you want to understand the financials of a SaaS company, then build a driver-based model and vary the drivers.  In this case and many others, BOTE analysis fails due to subtle complexity, whereas a well-built model will always produce correct answers, even if they are counter-intuitive.

Such cases aside, the real problem with being too focused on CAC Payback Period is that CPP is a risk metric that tells you nothing about returns.  Companies are in business to get returns, not simply to minimize risk, so to properly analyze a SaaS business we need to look at both.

The CPP formula outputs a payback period in months, but most enterprise SaaS businesses today run on an annual rhythm.  Despite pricing that is sometimes still stated per-user, per-month, SaaS companies realized years ago that enterprise customers preferred annual contracts and actually disliked monthly invoicing.  Just as MRR is a bit of a relic from the old SaaS days, so is a CAC Payback Period stated in months.

In a one-hundred-percent annual prepaid contract world, the CPP formula should output in multiples of 12, rounding up for all values greater than 12.  For example, if a company’s CAC Payback Period is notionally 13 months, in reality it is 24 months because the leftover 1/13 of the cost isn’t collected until the a customer’s second payment at month 24.  (And that’s only if the customer chooses to renew — see above discussion of churn.)

Anyone who argues 12.0 months is forgetting the point of the metric.  Payback periods are risk metrics and measured by the amount of time it takes to get your investment back [2].  If you want to look at S&M efficiency, look at the CAC ratio.  If you want to know about the efficiency of running the SaaS service, look at subscription gross margins.  If you want to talk about lifetime value, then look at LTV/CAC.  CAC Payback Period is a risk metric that measures how long your CAC investment is “on the table” before getting paid back.  In this instance the 12 months generated by the standard formula is incorrect because the formula misses the prepayment and the correct answer is 1 day.

If you want to look at something other than payback, then pick another metric.  But the CPP is 1 day.  You asked how long it takes for the company to recoup the money it spends to acquire a customer.  For CPPs less than or equal to 12 in a one-hundred percent annual prepaid world, the answer is one day.

It gets harder.  Imagine a company that sells in a sticky category (e.g., where typical lifetimes may be 10 years) and thus is a high-consideration purchase where prospective customers do deep evaluations before making a decision (e.g., ERP).  As a result of all that homework, customers are happy to sign long contracts and thus the company does only 3-year prepaid contracts.  Now, let’s look at CAC Payback Period.  Adapting our rules above, any output from the formula greater than 36 months should be rounded up in multiples of 36 months and, similarly, any output less than or equal to 36 months should be rounded down to 1 day.

It gets even harder.  Now imagine a company that does half 1-year deals and half 3-year deals (on an ARR-weighted basis).  Let’s assume it has a CAC ratio of 1.5, 75% subscription gross margins, and thus a notional CAC Payback Period of 24 months.  Let’s see what really happens using a model: 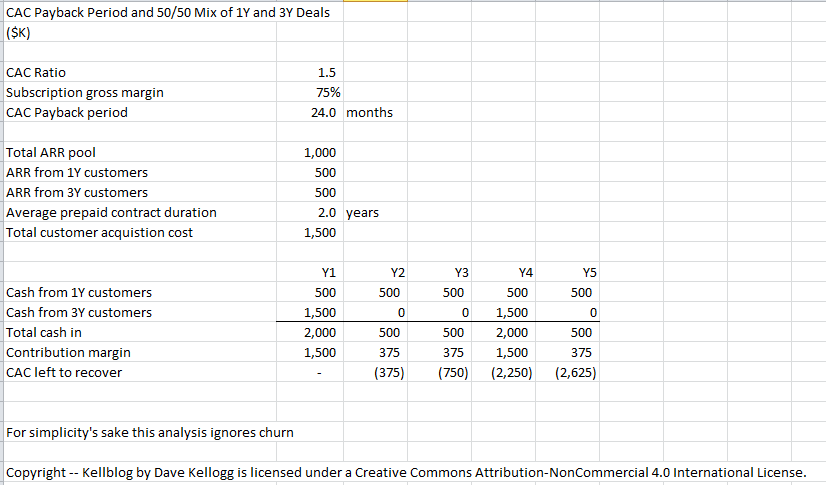 Using this model, you can see that the actual CAC Payback Period is 1 day. Why?  We need to recoup $1.5M in CAC.  On day 1 we invoice $2.0M, resulting in $1.5M in contribution margin, and thus leaving $0 in CAC that needs to be recovered.

While I have not yet devised general rounding rules for this situation, the model again demonstrates the key point – that the mix of 1-year and 3-year payment structure confounds the CPP formula resulting in a notional CPP of 24 months, when in reality it is again 1 day.  If you want to make rounding rules beware the temptation to treat the average contract duration (ACD) as a rounding multiple because it’s incorrect — while the ACD is 2 years in the above example, not a single customer is paying you at two-year intervals:  half are paying you every year while half are paying you every three.  That complexity, combined with the reality that the mix is pretty unlikely to be 50/50, suggests it’s just easier to use a model than devise a generalized rounding formula.

But pulling back up, let’s make sure we drive the key point home.  The CAC Payback Period is the single most often misunderstood SaaS metric because people forget that payback metrics are about risk, not return, and because the basic formulas – like those for many SaaS metrics – assume a monthly model that simply does not apply in today’s enterprise SaaS world, and fail to handle common cases like annual or multi-year prepaid contracts.

[1] This is a huge omission for a metric that was defined in terms of MRR and which thus assumes a monthly business model.  As the example shows, the formula (which fails to account for churn) outputs a CAC payback of 33 months, but in reality it’s never.  Quite a difference!

[2] If I wanted to be even more rigorous, I would argue that you should not include subscription gross margin in the calculation of CAC Payback Period.  If your CAC ratio is 1.0 and you do annual prepaid contracts, then you immediately recoup 100% of your CAC investment on day 1.  Yes, a new customer comes with a future liability attached (you need to bear the costs of running the service for them for one year), but if you’re looking at a payback metric that shouldn’t matter.  You got your money back.  Yes, going forward, you need to spend about 30% (a typical subscription COGS figure) of that money over the next year to pay for operating the service, but you got your money back in one day.  Payback is 1 day, not 1/0.7 = 17 months as the formula calculates.

20 responses to “CAC Payback Period:  The Most Misunderstood SaaS Metric”