Can the Media Please Stop Referring to Company Size by Valuation?

The following tweet is the umpteenth time I’ve seen the media size a company by valuation, not revenue, in the past few years:

Call me old school, but I was taught to size companies by revenue, not market capitalization (aka, valuation).

Calling Palantir a $20B company suggests they are doing $20B in revenues, which is certainly not the case.  (They say they did $1B in 2015 and that’s bookings, not revenue.)  So we’re not talking a small difference here.  Depending on the hype factor surrounding a company, we might be talking 20x.

Domo is another company the media loves to size by its market cap.

I’ve heard revenue estimates of $50M to $100M for Domo, so here again, we’re not talking about a small difference.  Maybe 20x.

When my friend Max Schireson stepped down from MongoDB to spend more time with his family, the media did it again (see the first line of text below the picture)

So why does the media do this?  Why do they want to mislead readers by a factor of 20?

In the end, because it (metaphorically) sells more newspapers.  “Wow, some guy just quit as CEO of a billion-dollar company to actually spend more time with his family” just sounds a whole lot better than the same line with a comparatively paltry $50M instead.  Man Bites Dog beats Dog Bites Man every time.

But it’s wrong, and the media should stop doing it.  Why? 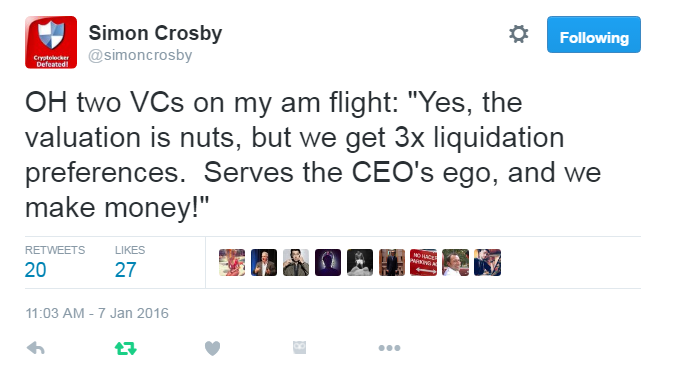 When was the last time I saw the media consistently size companies by valuation instead of revenue?  1997 to 2001.  Bubble 1.0.

Maybe we’ll soon be talking about eyeballs again.  Or, if you like Stance, the company that has raised $116in VC and has “ignited a movement of art and self-expression,” in socks (yes, socks) then maybe we’ll be talking about feet.

One response to “Can the Media Please Stop Referring to Company Size by Valuation?”