Imagine a board meeting.

Director:  What’s the forecast for new ARR this quarter?

Director:  So what’s the most likely outcome?

Director:  What are you really going to do?  (The classic newb trap question.)

Sales VP:  I think we can come in North of that.

Director:  What are the odds of coming in at or above the forecast?

Director:   What do you mean by worst case?

Director:  So, let’s say a 10% chance of being at/below the worst case?

Director:  What do you mean by best case?

Sales VP:  Well, if we really struck it rich and everything lined up just the way I wanted, that would be best case.

Director:  You mean if all the deals came in — so best case basically equals pipeline?

Sales VP:  No, that never happens, I’ve made about 10 scenarios of different deal closing combinations and in 2 of them I can get to the best case.

You see the problem?  Does it sound familiar?  Do you realize how much time we spend talking in board meetings about “forecast,” “best case,” and “worst case” without every discussing what we mean by those terms?

Do you see how this is compounded by the sales VP’s natural, intuitive view of the outcomes?  Do you see the obvious mathematical contradictions?  “I always make my forecast” says it’s a 100% number, but then the VP says it’s the “most likely” number which implies 50%.  Then the VP says there’s a 5% chance of coming in at/less than worst case (which is much lower) and then kind of implies that there’s a 20% chance of beating best case – but the 2 out of 10 is meaningless because it’s not a probability, it’s just a count of scenarios.  Nothing adds up.

The result is, if you’re not careful, the board ends up counting angels on pinheads.  What can we do to fix this?  It’s simple:  teach (and if need be, force) your sales VP to think probabilistically.  Ask him/her how often:

So, with those three questions, we’ve now established that we want the sales VP to give us:

Put differently, when the sales VP decides what number to forecast that they should be thinking:

The beauty here is that when you work at a company a long time you can get enough quarters under your belt, to start really seeing how you’re doing relative to these frequencies.  What’s more, by converting the probabilities into frequencies (e.g., once every 10 quarters) you make it more intuitive for the sales VP and the organization to think this way.

In addition, you have a basis for conversations like this one which, among other things, is about overconfidence:

CEO:  You need to work on your forecasting.

Sales VP:  You know it’s hard out there, very competitive, and we don’t have much deal flow.  Back when I was at { Salesforce | Oracle | SAP }, I was much better at forecasting because we had more volume.

CEO:  But we agreed your forecast should be a 90% number and you’ve missed it 2 out of the past 4 quarters.

Sales VP:  Yes, but as I’ve said it’s tough to forecast in this market.

CEO:  Then forecast a lower number so you can beat it 90% of the time.  I’m asking you for a 90% number and empirically you’re giving me a 50% number.

CEO:  Plus, when those two big deals slipped last quarter you didn’t drop your forecast, why?

Sales VP:  Because where I grew up, you don’t cut the forecast.  You try like crazy to hold it.  Do you know the morale problems it causes when I cut the forecast – especially if it’s below plan? So, yes, when those two deals slipped it added more risk to the forecast – and I told you and the board that — but I didn’t cut forecast, no.

CEO:  But “adding risk” here is meaningless.  In reality, “adding risk” means it’s not a 90% number anymore.  You’ve taken what was a 90% number and it’s now more like a 60% or 70% number.  So I want you to forget what they taught you growing up in sales and always – every week – give me a number that based on all available information you are 90% sure you can beat.  If that means dropping the forecast so be it. 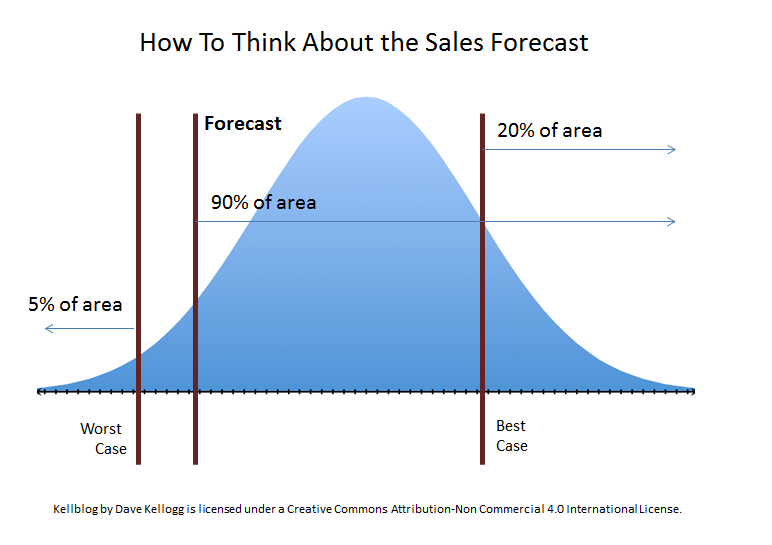 This also helps with the board and the inevitable sandbagger issue.  In my experience (and with a bit of exaggeration) you always seem to be in one of two situations:  (1) intermittently missing plan and in trouble or (2) consistently making plan and a “sandbagger” – it feels like there’s nothing in between.

Well, if you establish with the board that your company forecast is a 90% number it means you are supposed to beat it 9 times out of 10 so you can only really be labelled a sandbagger when you’re 15 for 15 or 20 for 20.  It also reminds them that you’re supposed to arrive at the forecast so that you miss once every 10 quarters so they shouldn’t freak out if once every 2.5 years if that happens — it’s supposed to happen in this system.  (Just don’t let a once-in-ten-quarter event happen twice in a row.)

I like this quantitative basis for sales forecasting and I carry it down to the salesrep and pipeline level.  I believe that each “forecast category” should have a probability associated with it.  For example, at the opportunity level, you should link probabilities to categories, such as:

This, in turn, means that over time, a given salesrep should close 90% of their committed deals, 70% of their forecast deals, and 30% of their upside.  Deviations from this over time indicate that the rep is mis-categorizing the deals because the probability should be the basis for the forecast category assignment [1].

Finally, I do believe that salesreps should give quarterly forecasts [2] that reflect their sense for how things will come in given all the odd things that can happen to deals (e.g., size changes, acceleration, slippage).  I believe those forecasts should be a 70% number because the sales manager will be managing across a  portfolio of them and while there is little room for a company to miss at the VP of Sales level, there is more room for and more variance in performance across salesreps.

While I know this will not necessarily come naturally to all sales VPs — and some may push-back hard — this is a simple, practical, and rigorous way to think about the forecast.

[1] Some people do this through an independent (orthogonal) field in the CRM system called probability.  I think that’s unnecessary because in my mind forecast category should effectively equal probability and your options for picking a probability should be bucketed.  No one can say a deal is 43% vs. 52% and forecast category doesn’t indicate some probability of closing, then … what use is it and on what basis should you classify something as forecast vs. upside?

[2] Some people believe that only managers should make forecasts, but I believe both reps and managers should forecast for two reasons:  (1) provided it’s left independent and not “managed” by the managers, the aggregated salesrep-level forecast provides another, Wisdom of Crowds-y, view into the sales forecast and (2) it’s never too early to teach salesreps how to forecast which is best learned through the experience of trial and error over many quarters.