It’s another seemingly simple question.  But, like most SaaS metrics, when you dig deeper you find it’s not.  In this post we’ll take a look at how to calculate win rates and use win rates to introduce the broader concept of milestone vs. flow analysis that applies to conversion rates across the entire sales funnel.

Let’s start with some assumptions.  Once an opportunity is accepted by sales (known as a sales-accepted opportunity, or SAL), it eventually will end up in one of three terminal states:

Some people don’t like “other” and insist that opportunities should be exclusively either won or lost and that other is an unnecessary form of lost which should be tracked with a lost reason code as opposed to its own state.  I prefer to keep other, and call it derailed, because a competitive loss is conceptually different from a project cancellation, major delay, loss of sponsor, or a company acquisition that halts the project.  Whether you want to call it other, no decision, or derailed, I think having a third terminal state is warranted from first principles.  However, it can make things complicated.

Narrow win rate alone can be misleading.  If I told you a company had a 66% win rate, you might be tempted to say “time to add more salespeople and scale this thing up.”  If I told you they got the 66% win rate by derailing 94 out of every 100 opportunities it generated, won 4, and lost the other 2, then you’d say “not so fast.”  This, of course, would show up in the broad win rate of 4%.

This brings up the important question of timing.  Both these win rate calculations ignore deals that push out of a quarter.  So another degenerate case is a situation where you win 4, lose 2, derail 4, and push 90 opportunities.  In this case, narrow win rate = 66% and broad win rate = 40%.  Neither is shining a light on the problem (which, if it happens continuously, I call a rolling hairball problem.)

For those sorts of questions, I think it’s far better to do a cohort-based analysis, which I call a flow analysis.  Instead of looking at all the opportunities that hit a terminal state in a given time period, you go back in time, grab a cohort of opportunities (e.g., all those generated in 4Q16) and then see how they play out over time.  You go with the flow.

The big downside of flow analysis is you end up analyzing ancient history.  For example, if you have a 9 month average sales cycle with a wide distribution around the mean, you may need to wait 15-18 months before the vast majority of the opportunities hit a terminal state.  If you analyze too early, too many opportunities are still open.  But if you put off analysis then you may get important information, but too late.

You can compress the time window by analyzing programs effectiveness not to sales outcomes but to important steps along the funnel.  That way you could compare two programs on the basis of their ability to generate MQLs or SALs, but you still wouldn’t know whether and at what relative rate they generate actual customers.  So you could end up doubling down on a program that generates a lot of interest, but not a lot of deals.

Let’s look at an example.  Here’s a chart that tracks 20 opportunities, 10 generated in 1Q17 and 10 generated in 2Q17, through their entire lifetime to a terminal stage. 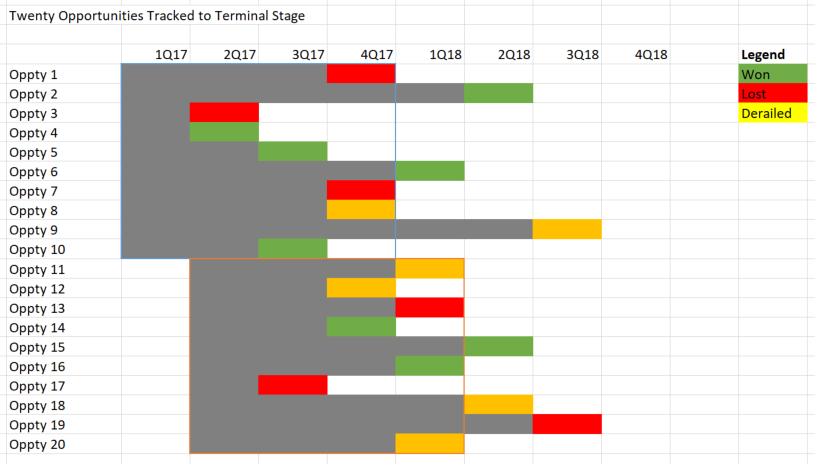 In reality things are a lot more complicated than this picture because you have opportunities still being generated in 3Q17 through 4Q18 and you’ll have opportunities that are still in play generated in numerous quarters before 1Q17.  But to keep things simple, let’s just analyze this little slice of the world.  Let’s do a milestone-based win/loss analysis.

First, you can see the milestone-based win/loss rates bounce around a lot.  Here it’s due in part due to law of small numbers, but I do see similar volatility in real life — in my experience win rates bounce within a fairly broad zone — so I think it’s a real issue.  Regardless of that, what’s indisputable is that in this example, this is how things will look to the milestone-based win/loss analyzer.  Not a very clear picture — and a lot to panic about in 4Q17.

Let’s look at what a flow-based cohort analysis produces.

In this case, we analyze the cohort of opportunities generated in the year-ago quarter.  Since we only generate opportunities in two quarters, 1Q17 and 2Q17, we only have two cohorts to analyze, and we get only two sets of numbers.  The thin blue box shows in opportunity tracking chart shows the data summarized in the 1Q18 column and the thin orange box shows the data for the 2Q18 column.  Both boxes depict how 3 opportunities in each cohort are still open at the end of the analysis period (imagine you did the 1Q18 analysis in 1Q18) and haven’t come to final resolution.  The cohorts both produce a 50% narrow win rate, a 43% vs. 29% broad win rate, and a 30% vs. 20% close rate.  How good are these numbers?

Well, in our example, we have the luxury of finding the true rates by letting the six open opportunities close out over time.  By doing a flow-based analysis in 4Q18 of the 1H17 cohort, we can see that our true narrow win rate is 57%, our true broad win rate is 40%, and our close rate is also 40% (which, once everything has arrived at a terminal state, is definitionally identical to the broad win rate).

Hopefully this post has helped you think about your funnel differently by introducing the concept of milestone- vs. flow-based analysis and by demonstrating how the same business situation results in a very different rates depending on both the choice of win rate and analysis type.

Please note that the math in this example backed me into a 40% close rate which is about double what I believe is the benchmark in enterprise software — I think 20 to 25% is a more normal range.

One response to “Win Rates, Close Rates and Milestone vs. Flow Analysis”