Talking Competition: Methinks Thou Doth Protest Too Much.

From time to time marketers and executives need to talk about the competition with those outside the company, including analysts, partners, and prospective investors.  In this post, we’ll cover my 4 rules for this type of communication.

Be Consistent.
The biggest mistake people make is inconsistency, often because they’re trying to downplay a certain competitor.   Example:

“Oh, TechMo.  No, we never see them.  They’re like nowhere.  And you know their technology is really non-scaleable because it runs out of address space in the Java virtual machine.  And their list-based engine doesn’t scale because it didn’t scale when the same three founders, Mo, Larry, and Curly, did their last startup which used primarily the same idea.  And while I know they’re up to 150 employees, they must be in trouble because in the past 6 months they’ve lost their VP of Sales, Jon Smith, and their VP of Product Management, Paula Sands, and that new appexchange-like thing they launched last week, with 37 solutions, well it’s a not real either because 15 of the 37 solutions aren’t even built by partners, and they’re more prototypes than applications, and — another thing — I heard that TechMo World last week in Vegas had only 400 attendees and customers didn’t react well to the announcement they made about vertical strategy.  Yes, TechMo’s nobody to us.  We hardly ever see them.”

What’s the one thing the listener is thinking on hearing all this?

“Holy Cow, these guys are tracking TechMo’s every move.  They sure know a lot about somebody they supposedly never see.”

Or, in other words, “the lady doth protest too much, methinks.”  (Hamlet.)

Don’t be this person.  Stay credible.  Be consistent.  If you’re going to be dismissive of someone, dismiss them.  But don’t try to dismiss them, then bleed fear and guilt all over the audience.  Line up your words, your attitude, and your behavior.

Cede, But Cede Carefully.
Some people say never cede anything at all, but I think that’s dangerous, particularly when dealing with sophisticated audiences like industry analysts, prospective investors, or channel partners (who work in the field every day).

I think ceding builds your credibility, but you need to be careful and precise in so doing so.  To take an old example, from BusinessObjects days:

It’s called positioning for a reason.  You’re supposed to be able to say what you do well, what your competitors do well, and what the difference is.  If you just go on singing “anything you can do I can do better, I can do anything better than you,” then you’re not going to build much credibility with your audience.

Don’t give competitor X an ounce more than they deserve and don’t forget to point out their limitations along the way.  When it comes to credit, give it where due, but be stingy — don’t give a drop more.

This will build your credibility in being reasonably objective.  More important, it also forces you to build some positioning.  As long you are claiming universal superiority — that no one will believe — you’re letting yourself off the hook for doing your job, in building credible positioning.

Keep Your Facts Straight
Be sure of what you say.  It’s far better to say less and be correct than to add just one more point you’re not sure of and get quickly contradicted.  Why?  Because your credibility is now in question as are all your other assertions — even the correct ones.

If you’re sure about something, then say it.  If you’re not sure but think it’s probable then weasel-word it — “we’re hearing,” “I heard from customers that,” “you can see several reviews on Glassdoor where former employees say,” or simply “we think.”  But don’t assert something as fact unless you are sure it is and you’re ready to defend it.

Read the Audience to Avoid the Blindside Hit
I warn every marketer and product manager I know about the blindside hit.  When you’re doing a briefing with hardened industry analyst on a market they’ve covered for 20 years, you’re as vulnerable to a blindside hit as an NFL quarterback.

You make some assertions, and you’re feeling good.  But you stop paying attention to the audience.  You don’t notice the body language showing that they’re not buying it anymore.  You don’t read the warning signs.  You miss the building tension in their voice.   You don’t know that the vendor you’re attacking is the analyst’s favorite and they just had a big steak dinner at the roadshow they did last week in Cleveland.

And then you make one too many false claims and then like a safety on a blitz, the analyst sees a hole in the offensive line, accelerates through it, and hits you in the back at full speed.  BOOM.  You awake a few minutes later and discover you’re strapped to a stretcher with a neck collar on and the CMO and the analyst relations director are carrying you out of the meeting.

“Sorry, Brian got a little ahead of himself, there.  Bob will take it from here.” 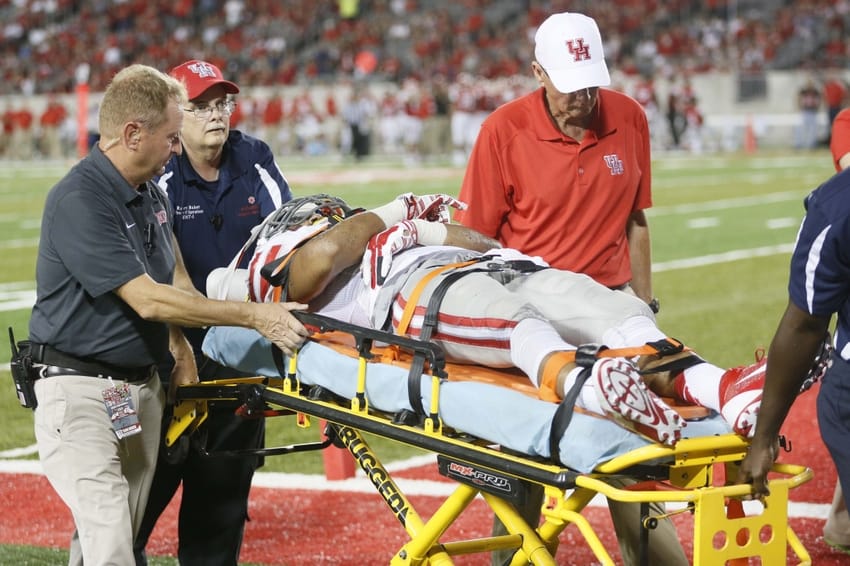 Product marketer carried out of industry analyst briefing. Don’t let this be you.

4 responses to “Talking Competition: Methinks Thou Doth Protest Too Much.”