The Domo S-1: Does the Emperor Have Clothes?

I preferred Silicon Valley [1] back in the day when companies raised modest amounts of capital (e.g., $30M) prior to an IPO that took 4-6 years from inception, where burn rates of $10M/year looked high, and where $100M raise was the IPO, not one or more rounds prior to it.  When cap tables had 1x, non-participating preferred and that all converted to a single class of common stock in the IPO. [2]

These days, companies increasingly raise $200M to $300M prior to an IPO that takes 10-12 years from inception, the burn might look more like $10M/quarter than $10M/year, the cap table loaded up with “structure” (e.g., ratcheting, multiple liquidation preferences).  And at IPO time you might end up with two classes common stock, one for the founder with super-voting rights, and one for everybody else.

I think these changes are in general bad:

Moreover, the Silicon Valley game changes from “who’s smartest and does the best job serving customers” on relatively equivalent funding to “who can raise the most capital, generate the most hype, and buy the most customers.”  In the old game, the customers decide the winners; in the new one, Sand Hill Road tries to, picking them in a somewhat self-fulfilling prophecy.

The Hype Factor
In terms of hype, one metric I use is what I call the hype ratio = VC / ARR.  On the theory that SaaS startups input venture capital (VC) and output two things — annual recurring revenue (ARR) and hype — by analogy, heat and light, this is a good way to measure how efficiently they generate ARR.

As I often say, behind every “marketing genius” is a giant budget, and Domo is no exception [4].

Sometimes things go awry despite the most blue-blooded of investors and the greenest of venture money.  Even with funding from the likes of NEA and Lightspeed, Tintri ended up a down-round IPO of last resort and now appears to be singing its swan song.  In the EPM space, Tidemark was the poster child for more light than heat and was sold in what was rumored to be fire sale [5] after raising over $100M in venture capital and having turned that into what was supposedly less than $10M in ARR, an implied hype ratio of over 10.

The Top-Level View on Domo
Let’s come back and look at the company.  Roughly speaking [6], Domo:

Oh, and we’ve got a highly unprofitable, venture-backed startup using a private jet for a bit less than $1M year [7].  Did I mention that it’s leased back from the founder?  Or the $300K in catering from a company owned by the founder and his brother.  (Can’t you order lunch from a non-related party?)

As one friend put it, “the Domo S-1 is everything that’s wrong with Silicon Valley in one place:  huge losses, weak governance, and now modest growth.”

Personally, I view Domo as the Kardashians of business intelligence – famous for being famous.  While the S-1 says they have 85 issued patents (and 45 applications in process), does anyone know what they actually do or what their technology advantage is?  I’ve worked in and around BI for nearly two decades – and I have no idea.

Maybe this picture will help. 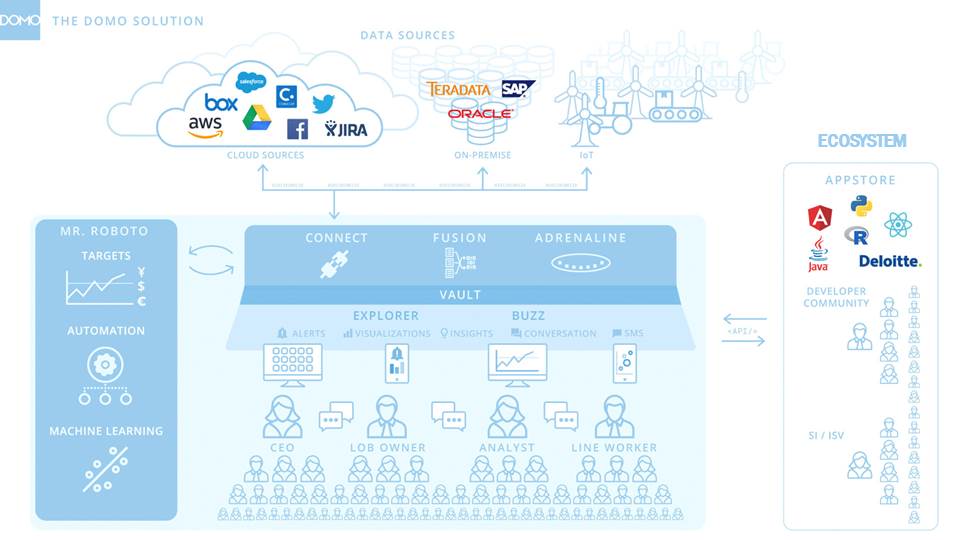 The company itself admits the current financial situation is unsustainable.

If other equity or debt financing is not available by August 2018, management will then begin to implement plans to significantly reduce operating expenses. These plans primarily consist of significant reductions to marketing costs, including reducing the size and scope of our annual user conference, lowering hiring goals and reducing or eliminating certain discretionary spending as necessary

A Top-to-Bottom Skim of the S-1
So, with that as an introduction, let’s do a quick dig through the S-1, starting with the income statement: 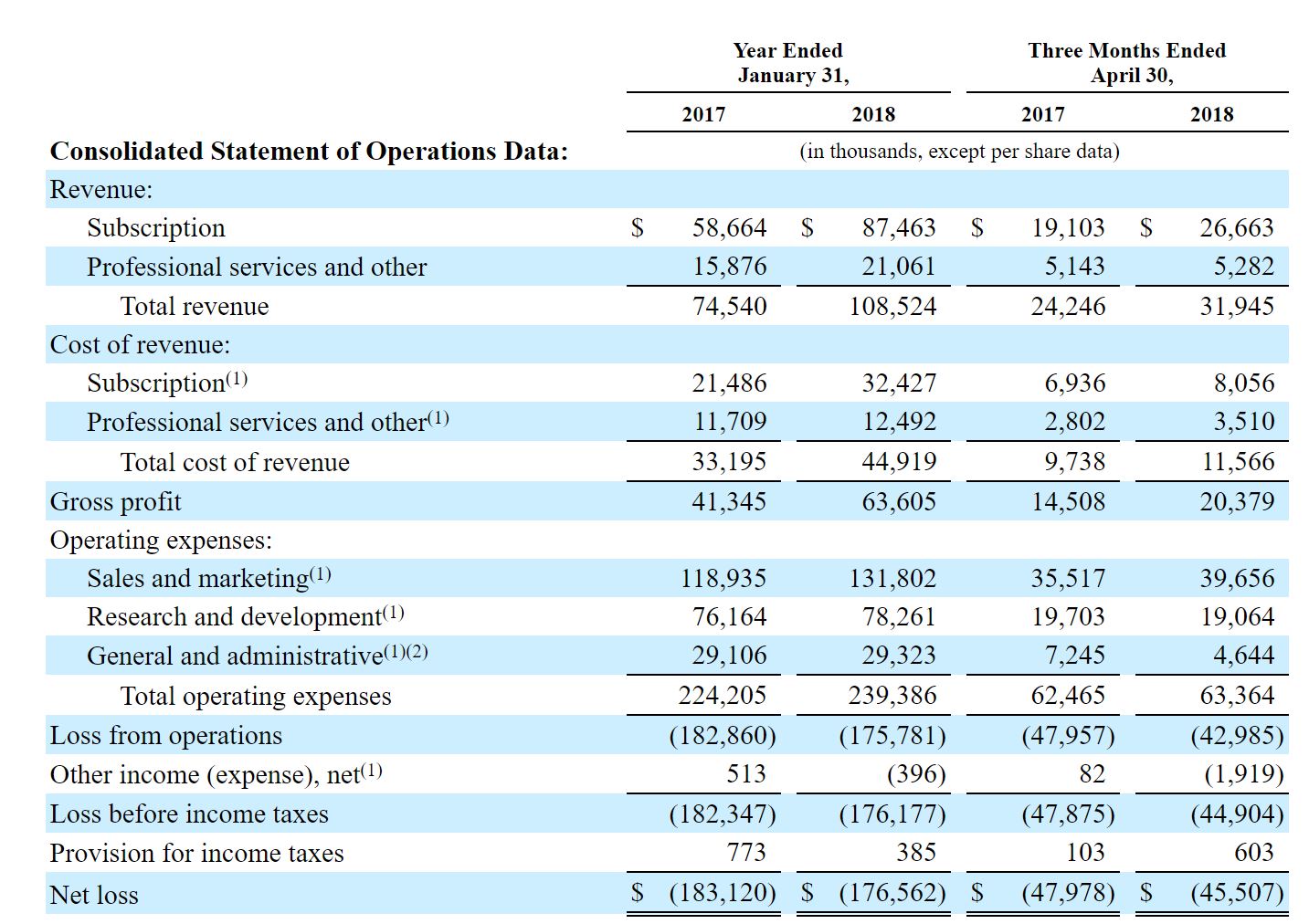 Historically, given building Domo was like building seven start-ups in one, we had to make significant investments in research and development to build a platform that powers a business and provides enterprises with features and functionality that they require. 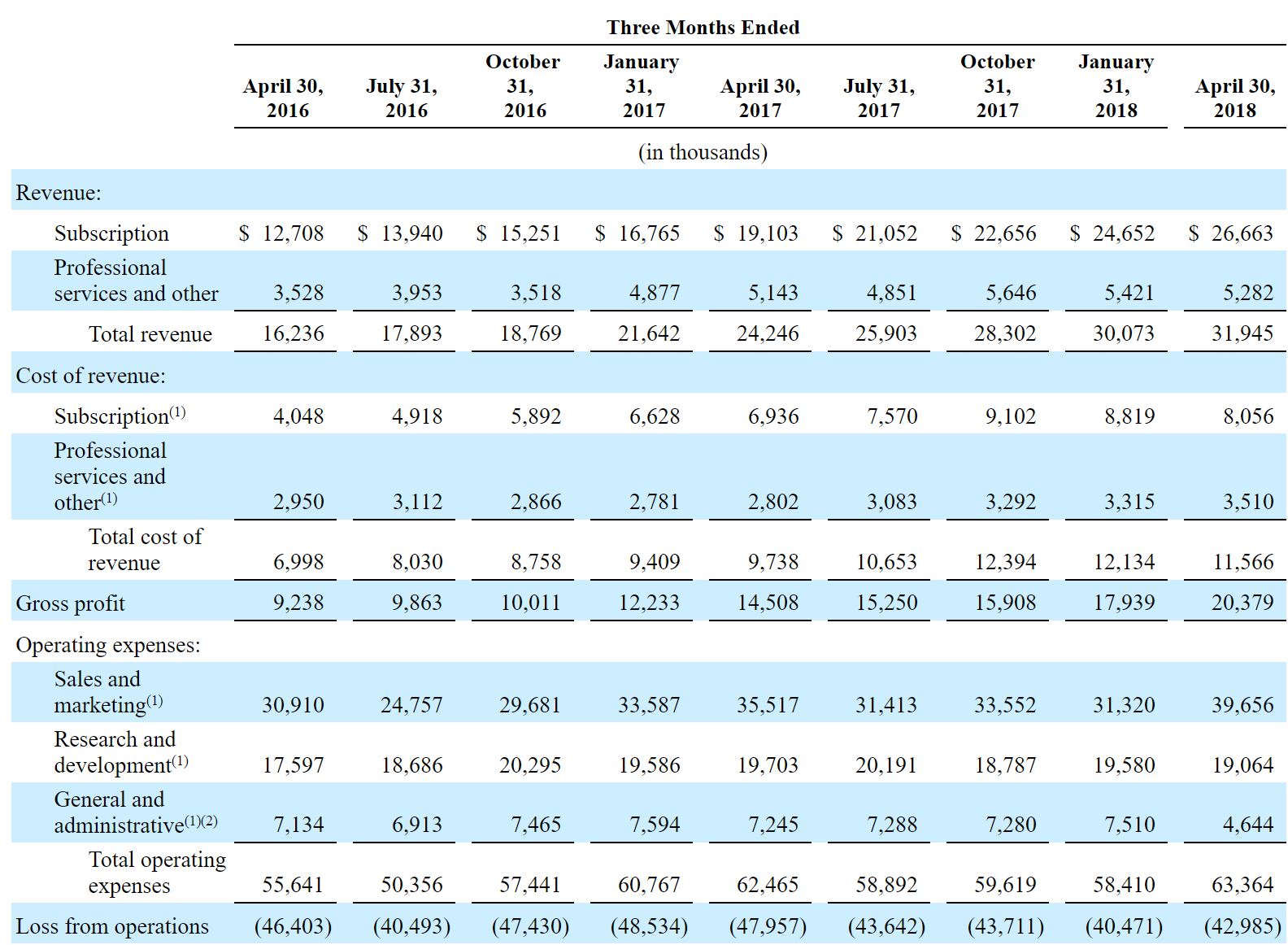 Domo is an operating system that powers a business, enabling all employees to access real-time data and insights and take action from their smartphone. We believe digitally connected companies will increasingly be best positioned to manage their business by leveraging artificial intelligence, machine learning, correlations, alerts and indices. We bring massive amounts of data from all departments of a business together to empower employees with real-time data insights, accessible on any device, that invite action. Accordingly, Domo enables CEOs to manage their entire company from their phone, including one Fortune 50 CEO who logs into Domo almost every day and over 10 times on some days. 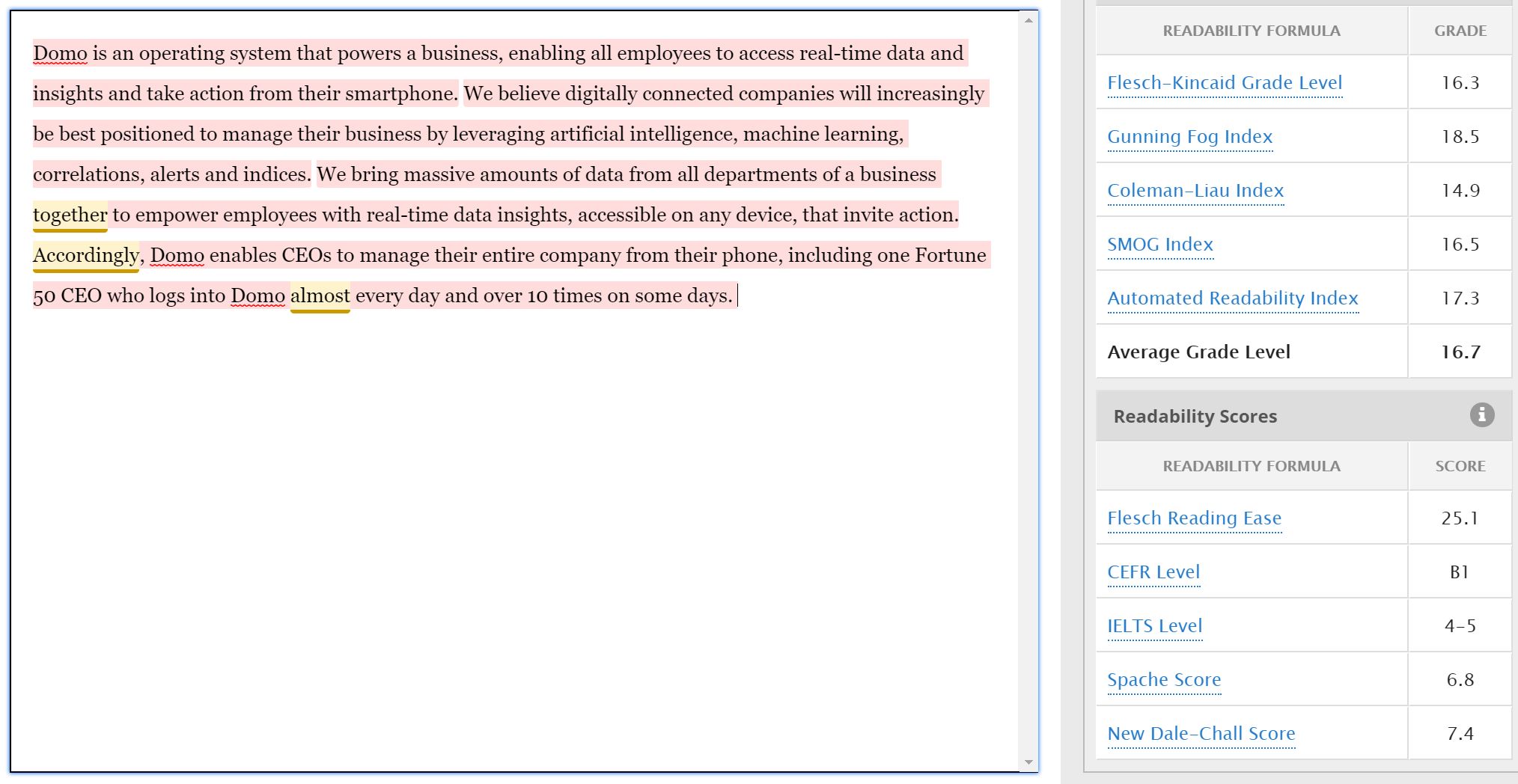 Through Mr. Roboto, which leverages machine learning algorithms, artificial intelligence and predictive analytics, Domo creates alerts, detects anomalies, optimizes queries, and suggests areas of interest to help people focus on what matters most. We are also developing additional artificial intelligence capabilities to enable users to develop benchmarks and indexes based on data in the Domo platform, as well as automatic write back to other systems.

Will they pull off they IPO?  There’s a lot not to like:  the huge losses, the relatively slow growth, the non-enterprise retention rates, the presumably high CAC, the $12M in FY18 churn, and the 40x voting rights, just for starters.

However, on the flip side, they’ve got a proven charismatic entrepreneur / founder in Josh James, an argument about their enterprise customer success, growth, and penetration (which I’ve not had time to crunch the numbers on), and an overall story that has worked very well with investors thus far.

While the Emperor’s definitely not fully dressed, he’s not quite naked either.  I’d say the Domo Emperor’s donning a Speedo — and will somehow probably pull off the IPO parade.

[1] Yes, I know they’re in Utah, but this is still about Silicon Valley culture and investors.

[2] For definitions and frequency of use of various VC terms, go to the Fenwick and West VC survey.

[3] I’ll use revenue rather than trying to get implied ARR to keep the math simple.  In a more perfect world, I’d use ARR itself and/or impute it.  I’d also correct for debt and a cash, but I don’t have any MBAs working for me to do that, so we’ll keep it back of the envelope.

[4] You can argue that part of the “genius” is allocating the budget, and it probably is.  Sometimes that money is well spent cultivating a great image of a company people want to buy from and work at (e.g., Salesforce).  Sometimes, it all goes up in smoke.

[5] Always somewhat truth-challenged, Tidemark couldn’t admit they were sold.  Instead, they announced funding from a control-oriented private equity firm, Marlin Equity Partners, as a growth investment only a year later be merged into existing Marlin platform investment Longview Solutions.

[6] I am not a financial analyst, I do not give buy/sell guidance, and I do not have a staff working with me to ensure I don’t make transcription or other errors in quickly analyzing a long and complex document.  Readers are encouraged to go the S-1 directly.  Like my wife, I assume that my conclusions are not always correct; readers are encouraged to draw their own conclusions.  See my FAQ for complete disclaimer.

84 responses to “The Domo S-1: Does the Emperor Have Clothes?”