How many times have you heard this conversation?

VC:  how many sales reps do you have?

VC:  What do you mean, not really?

CEO:  Well, some of them are new and not fully productive yet.

VC:  How long does it take for them to fully ramp?

VC:  So how many fully-ramped reps do you have?

There’s a better way to have this conversation, to perform your sales analytics, and to build your bookings capacity waterfall model.  That better way involves creating a new metric called ramped rep equivalents (RREs). Let’s build up to talking about RREs by first looking at a classical sales bookings waterfall model. 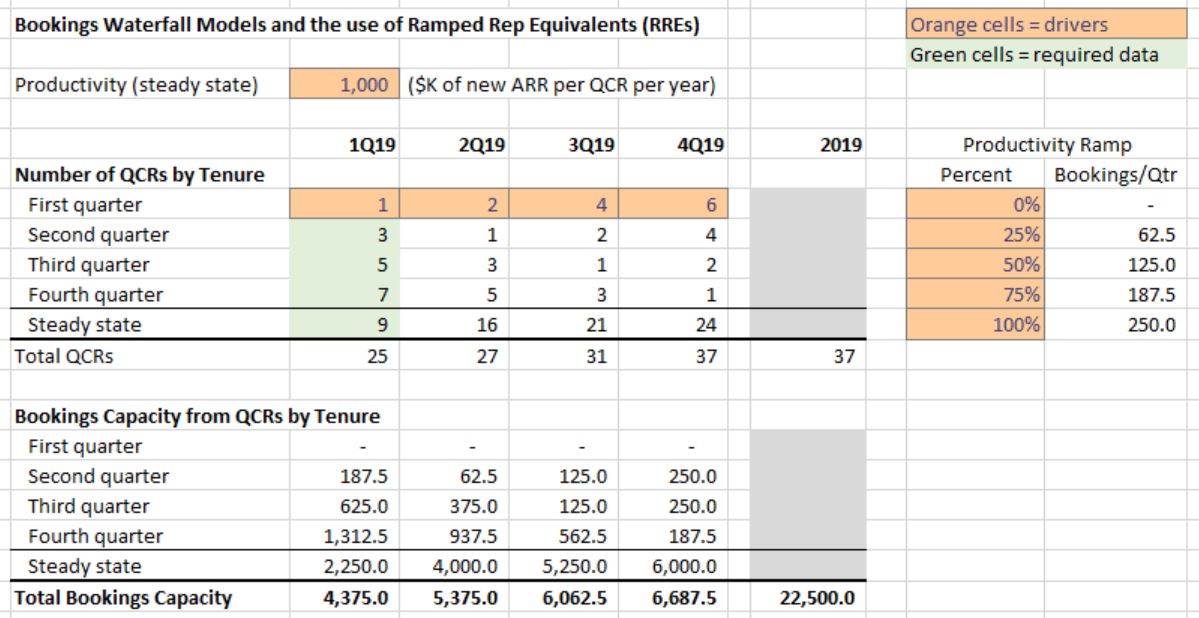 I love building these models and they’re a lot of fun to play with, doing what-if analysis, varying the drivers (which are in the orange cells) and looking at the results.  This is a simplified version of what most sales VPs look at when trying to decide next year’s hiring, next year’s quotas [1], and next year’s targets.  This model assumes one type of salesrep [2]; a distribution of existing reps by tenure as 1 first-quarter, 3 second-quarter, 5 third-quarter, 7 fourth-quarter, and 9 steady-state reps; a hiring pattern of 1, 2, 4, 6 reps across the four quarters of 2019; and a salesrep productivity ramp whereby reps are expected to sell 0% of steady-state productivity in their first quarter with the company, and then 25%, 50%, 75% in quarters 2 through 4 and then become fully productive at quarter 5, selling at the steady-state productivity level of $1,000K in new ARR per year [3].

Using this model, a typical sales VP — provided they believed the productivity assumptions [4] and that they could realistically set quotas about 20% above the target productivity — would typically sign up for around a $22M new ARR bookings target for the coming year.

While these models work just fine, I have always felt like the second block (bookings capacity by tenure), while needed for intermediate calculations, is not terribly meaningful by itself.  The lost opportunity here is that we’re not creating any concept to more easily think about, discuss, and analyze the productivity we get from reps as they ramp.

Enter the Ramped Rep Equivalent (RRE)
Rather than thinking about the partial productivity of whole reps, we can think about partial reps against whole productivity — and build the model that way, instead.  This has the by-product of creating a very useful number, the RRE.  Then, to get bookings capacity just multiply the number of RREs times the steady-state productivity.  Let’s see an example below: 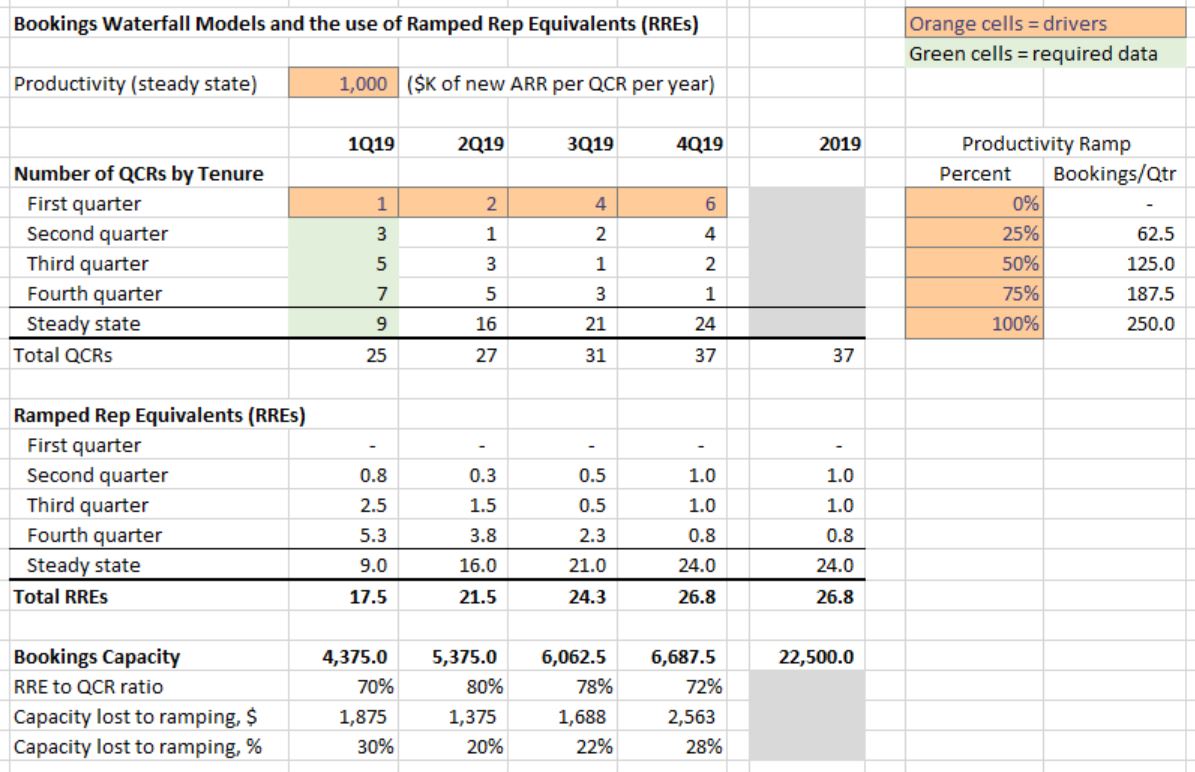 This provides a far more intuitive way of thinking about salesrep ramping.  In 1Q19, the company has 25 reps, only 9 of whom are fully ramped, and rest combine to give the productivity of 8.5 additional reps, resulting in an RRE total of 17.5.

“We have 25 reps on board, but thanks to ramping, we only have the capacity equivalent to 17.5 fully-ramped reps at this time.”

Impacts and Cautions
If you want to move to an RRE mindset, here are a few tips:

I recommend moving to an RRE mindset for modeling and analyzing sales capacity.  If you want to play with the spreadsheet I made for this post, you can find it here.

Thanks to my friend Paul Albright for being the first person to introduce me to this idea.

[2] Most companies have two or three types (e.g., corporate vs. field), so you typically need to build a waterfall for each type of rep.

[3] To build this model, you also need to know the aging of your existing salesreps — i.e., how many second-, third-, fourth-, and steady-state-quarter reps you have at the start of the year.

[5] This is one reason it’s so expensive to build an enterprise software sales force.  For several quarters you often get 100% of the cost and 50% of the sales capacity.

[6] Which should be an weighted average productivity by type of rep weighted by number of reps of each type.