Because I’ve been quite busy of late with the sale of my company, I’m doing a somewhat quicker and lighter (if not later) version of my annual predictions post.  Here goes, starting with a review of last year’s predictions.

1. We will again continue to see a level of divisiveness and social discord not seen since the 1960s. HIT.  Hard to argue I need to justify this one.  Want to argue about it?

2. The war on facts and expertise will continue to escalate. HIT. Unfortunately, the President is leading the charge on this front, with the Washington Post fact checker tallying 7,645 false claims since taking office.

3. Leading technology and social media companies finally step up to face ethical challenges. MAJOR MISS.  Well, I nailed that the issue would be critical, but boy did I overestimate the maturity of the management of these companies.

4. AI will move from hype to action, meaning bigger budgets, more projects, and some high visibility failures. HIT, I think.  See this McKinsey report for some interesting survey data on AI adoption and barriers to it.

5. AI will continue to generate lots of controversy about job displacement. HIT. While the optimists say AI will create more jobs than it will displace, many still worry conversely.  Since the prediction was about the controversy continuing, we’ll call it a hit.

6. The bitcoin bubble bursts. MAJOR HIT.  This one partially redeems me for over-estimating Facebook’s management.

8. The freelance / gig economy continues to gain momentum with freelance workers poised to pass traditional employees by 2027. HIT.  Per this Forbes article, 57M people now participate in the gig economy in some way.

9. M&A heats up due to repatriation of overseas cash.  HIT. Per Berkery Noyes, software M&A deal value was up nearly $100B over 2017.  To the extent this was due to overseas cash repatriation I don’t know, but it certainly was a factor. 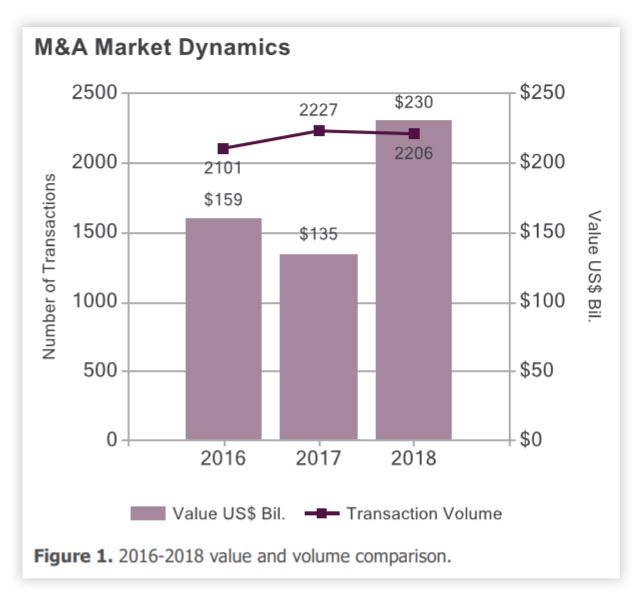 With 9 hits, two of them major – and with only one offsetting major miss — I should probably just drop the mike and get out of the predictions business.  But no guts, no glory.

Reminder to see the disclaimers in my FAQ and remember that these predictions are not financial or business advice – they are made in the spirit of fun.  To the extent they’re concrete, that’s to make the game more interesting so we can better assess them next year.  Here we go.

1. Fred Wilson is right, Trump will not be president at the end of 2019. I think Fred’s also right on virtually all of the other predictions made in his epic post, which I won’t attempt to summarize here. Read Fred’s post – and just make sure you read to the end, because it’s not all doom and gloom.  So, as a Kellblog first, prediction #1 is a pointer.

2. The Democratic Party will continue to bungle the playing of its relatively simple hand. Party leaders will continue to fail to realize that the way to beat Trump is not through a hard-left platform with 70% tax rates that caters to the most liberal Democrats – but a centrist, pragmatic, people- and business-friendly platform that certainly won’t be enough for the far left, but will be far better than the Republican alternative for all Democrats, and most importantly, give centrist Republicans a realistic alternative to what their party is offering them.  The Democratic Party will continue to be more concerned with making statements than winning elections.  This may cost it, and the Nation, dearly.

Remember the famous Will Rodgers quote: “I am not a member of any organized political party.  I am a Democrat.”

3. 2019 will be a rough year for the financial markets. Political problems in the USA, Europe, and increasingly Latin American.  Trade wars.  Record deficits as we re-discover that trickle-down, tax-cut economics don’t work.  Threat of rising interest rates.   Brexit.   Many folks see a bear market coming.

Years ago, I accepted the fact that – like many – I am a hypocrite when it comes to the stock market.  Yes, I absolutely believe that it’s theoretically impossible to time the market.   But yes, I’m entering 2019 with a high allocation to cash and intend to keep it that way.  Hum.  Try to reconcile that.

For fun, let’s makes this concrete and predict that the BVP Emerging Cloud Index will end 2019 at 750.  I do this mostly to provide some PR for Bessemer’s Index, officially launched via the NASDAQ in October, 2018, but which was built on the back of five years of Bessemer maintaining it themselves.

4. VC tightens. Venture capital funding has been booming the past several years and – for the above reasons and others (e.g., the fact that most VCs don’t product enough returns to justify the risk and illiquidity) – I believe there will be tightening of VC in 2019.  If you agree, that means you should raise money now, while the sun’s still shining, and try to raise two years of capital required in your business plan (with some cushion). 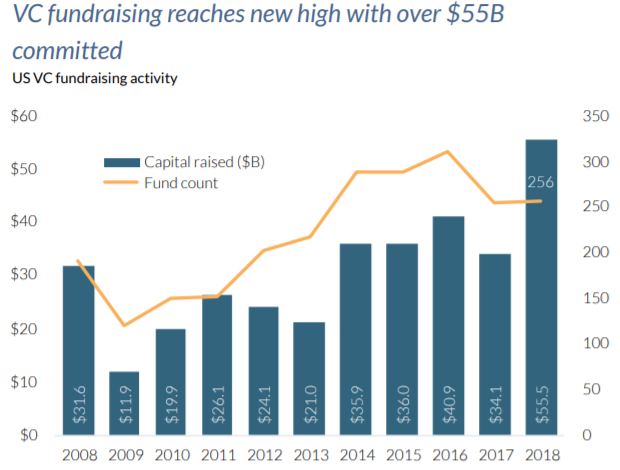 If things follow the recent trends, this will be hardest on average and/or struggling companies as VCs increasingly try to pick winners and make bets conservative in the sense that they are on known winners, even if they have to overpay to do so.  In this scenario, capital on reasonable terms could all but dry up for companies who have gone off-rails on their business plans.   So, if you’re still on rails, you might raise some extra capital now.  Getting greedy by trying to put up two more good quarters to take less dilution on your next round could backfire – you might miss one of those quarters in this increasingly volatile environment, but even if you don’t, VC market tightening could offset any potential valuation increase.

5. Social media companies get regulated. Having failed for years to self-regulate in areas of data privacy and usage, these companies will likely to face regulations in 2019 in the face of strong consumer backlash.  The first real clue I personally had in this area was during the 2016 election when Facebook didn’t just feed me, but actually promoted, a fake Denver Guardian story about a supposedly dead FBI agent linked to “her emails.”  I then read the now-famous “bullshit is highly engaging” quote from this story which helped reveal the depth of the problem:

Or, as former Facebook designer Bobby Goodlatte wrote on his own Facebook wall on November 8, “Sadly, News Feed optimizes for engagement. As we’ve learned in this election, bullshit is highly engaging. A bias towards truth isn’t an impossible goal. Wikipedia, for instance, still bends towards the truth despite a massive audience. But it’s now clear that democracy suffers if our news environment incentivizes bullshit.”

I won’t dive into detail here.  I do think Sheryl Sandberg may end up leaving Facebook; she was supposed to be the adult supervision, after all.  While I think he’s often a bit too much, I nevertheless recommend reading Chaos Monkeys for an interesting and, at times, hilarious insider look at Facebook and/or following its author Antonio Garcia Martinez.

6. Ethics make a comeback, for two reasons.  The first will be as a backlash to the blatant corruption of the current administration.  To wit:  the House recently passed a measure requiring annual ethics training for its members.  The second will have to do with AI and automation.  The Trolley Problem, once a theoretical exercise in ethics, is now all too real with self-driving cars.  Consider this data, based on MIT research in this article which shows preferences for sparing various characters in the event of a crash. 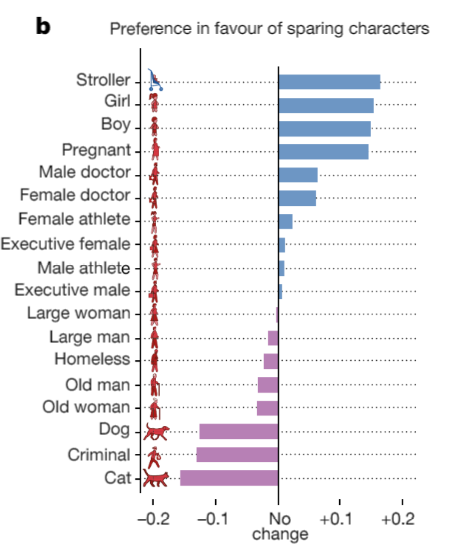 Someone will probably end up programming such preferences into a self-driving car.  Or, worse yet, as per the Trolley Problem, maybe they won’t.  While we may want to avoid these issues because they are uncomfortable, in 2019 I think they will be thrust onto center stage.

7. Blockchain, as an enterprise technology, fades away. Blockchain is a technology in search of a killer application.  Well, it actually has one killer application, cryptocurrency, which is why it was built.  And while I am a fan of cybercurrencies, blockchain is arguably inefficient at what it was built to do.  While Bitcoin will not take down the world electric grid as some have feared, it is still tremendously energy consumptive –in coming years, Bitcoin is tracking to consume 7.7 GW per year, comparable to the entire country of Austria at 8.2 GW.

While I’m not an expert in this field, I see three things that given me huge pause when it comes to blockchain in the enterprise:  (1) it’s hard to understand, (2) it consumes a huge amount of energy, and (3) people have been saying for too long that the second blockchain killer app (and first enterprise blockchain killer app) is just around the corner.  Think:  technology in search of a business problem.  What’s more, even for its core use-case, cryptocurrency, blockchain is vulnerable to being cracked by quantum computing by 2027.

8. Oracle enters decline phase and is increasingly seen as a legacy vendor. For decades I have personally seen Oracle as a leader.  First, in building the RDBMS market.  Second, in consolidating a big piece of the enterprise applications market.  Third, more generally, in consolidating enterprise software.  But, in my mind, Oracle is no longer a leader.  Perhaps you felt this way long ago.  I’d given them a lot of credit for their efforts (if not their progress) in the cloud – certainly better than SAP’s or IBM’s.  But SAP and IBM are not the competitors to beat in the future:  Amazon, Google, and a rejuvenated Microsoft are.  The reality is that Oracle misses quarters, cloud-washes sales, and is basically stagnant in revenue growth.  They have no vision.  They have become a legacy vendor.

The final piece of this snapped into place when Thomas Kurian departed to Google in a dispute with Larry Ellison about the cloud.  DEC’s Ken Olsen once said that Unix was “snake oil” and that was the beginning of the end for DEC.  Ellison once said roughly the same thing (“complete gibberish”) about the cloud.  And now the cloud is laughing back.

9. ServiceNow and/or Splunk get acquired. A friend of mine planted this seed in my mind and it’s more about corporate evolution than anything else.  They’re both great businesses that mega-vendors would love to own – especially if they end up “on sale” if we hit a bear market.

10. Workday succeeds with its Adaptive Insights agenda, meaning that Adaptive’s mid-market and SMB presence will be greatly lessened.   Most people I know think Workday’s acquisition of Adaptive was a head-scratcher.  Yes, Workday struggles in financial apps.  Yes, EPM is an easier entry point than core financials (which, as Zach Nelson used to say, were like a heart transplant).  But why in the world would a high-end vendor (with average revenue/customer of $1M+) acquire a low-end EPM vendor (with average revenue/customer of $27K)?  That’s hard to figure out.

But just because the acquisition was, to be kind, non-obvious, it doesn’t mean Workday won’t be successful with it.  Workday’s goals are clear: (1) to unite Adaptive with Workday in The Power of One – including re-platforming the backend and re-writing the user-interface, (2) to provide EPM to Workday’s high-end customer base, and (3) to provide an alternate financial entry point for sales when prospects say they’re not up for a heart transplant for at least 5 years.  I’m not saying Workday can’t be successful with their objectives.  I am saying Adaptive won’t be Adaptive when they’re done — you can’t be the high-end, low-end, cheap, expensive, simple, complex, agnostic, integrated EPM system.   Or, as SNL put it, you can’t be Shimmer — a dessert topping and a floor wax.  The net result:   like Platfora before them or Outlooksoft within SAP, Adaptive disappears within Workday and its presence in the mid-market and SMB is greatly reduced.

Disclaimer:  these predictions are offered in the spirit of fun.  See my FAQ for more and other terms of use.

11 responses to “Kellblog Predictions for 2019”