Enterprise SaaS companies need a lot of money to grow. The median company spends $1.32 to acquire $1.00 in annual recurring revenue (ARR) [1].  They need to make that investment for 14 years before getting to an IPO.  It all adds up to a median of $300M in capital raised prior to an IPO.

With such vast amounts of money in play, some say “it’s a growth at all costs” game.  But others hold to the Rule of 40 which attempts to balance growth and profitability with a simple rule:  grow as fast as you want as long as your revenue growth rate + your free cashflow margin >= 40%.

So, unless you’re an absolutely amazing company like Elastic (which had a Rule of 40 score of 87% at its IPO), you probably shouldn’t be unrealistically planning to become Rule of 40 compliant three years before your IPO [4].  If you do, especially if you’re well funded and don’t need additional expense constraints, you might well compromise growth with a premature focus on the Rule of 40, which could shoot off your corporate foot in terms of your eventual valuation.

If “when should we be Rule of 40 compliant” is the wrong question, then what’s the right one?

What should my company’s Rule of 40 glideslope be?

That is, over the next several years what is your eventual Rule of 40 score target and how do you want to evolve to it?  The big advantage of this question is that the answer isn’t “a year” and it doesn’t assume Rule of 40 compliance.  But it does get you to start thinking about and tracking your Rule of 40 score.

I built a little model to help do some what-if analysis around this question.  You can download it here. 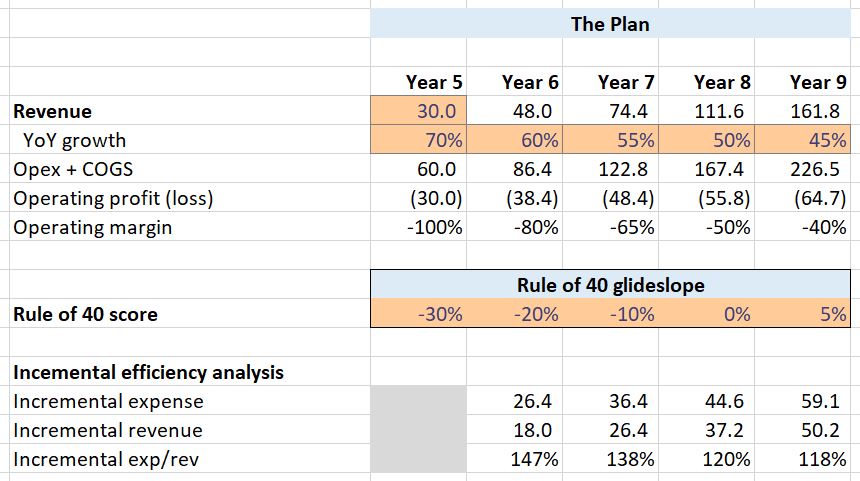 In our example, we’ve got a 5 year-old, $30M ARR SaaS company planning the next five years of its evolution, hopefully with an IPO in year 8 or 9.  The driver cells (orange) define how fast you want to grow and what you want your Rule of 40 glideslope to be.  Everything else is calculated.  At the bottom we have an overall efficiency analysis:  in each year how much more are we spending than the previous year, how much more revenue do we expect to get, and what’s the ratio between the two (i.e., which works like kind of an incremental revenue CAC).  As we improve the Rule of 40 score you can see that we need to improve efficiency by spending less for each incremental dollar of revenue.  You can use this as a sanity check on your results as we’ll see in a minute.

Let me demonstrate why I predict that 9 out 10 ten CFOs will love this modeling approach.  Let’s look at every CFO’s nightmare scenario.  Think:  “we can’t really control revenues but we can control expenses so my wake up in the middle of the night sweating outcome is that we build expenses per the plan and miss the revenues.”

In the above (CFO nightmare) scenario, we hold expenses constant with the original plan and come in considerably lighter on revenue.  The drives us miles off our desired Rule of 40 glideslope (see red cells).  We end up needing to fund $42.4M more in operating losses than the original plan, all to generate a company that’s $30.5M smaller in revenue and generating much larger losses.  It’s no wonder why CFOs worry about this.  They should.

What would the CFO really like?  A Rule-of-40-driven autopilot.

As in, let’s agree to a Rule of 40 glideslope and then if revenues come up short, we have all pre-agreed to adjust expenses to fall in line with the new, reduced revenues and the desired Rule of 40 score.

That’s what the third block shows above.  We hold to the reduced revenues of the middle scenario but reduce expenses to hold to the planned Rule of 40 glideslope.  Here’s the bad news:  in this scenario (and probably most real-life ones resembling it) you can’t actually do it — the required revenue-gathering efficiency more than doubles (see red cells).  You were spending $1.38 to get an incremental $1 of revenue and, to hold to the glideslope, you need to instantly jump to spending only $0.49.  That’s not going to happen.  While it’s probably impossible to hold to the original {-10%, 0%, 5%} glideslope, if you at least try (and, e.g., don’t build expenses fully to plan when other indicators don’t support it), then you will certainly do a lot better than the {-10%, -32%, -42%} glideslope in the second scenario.

In this post, we’ve talked about the Rule of 40 and why startups should think about it as a glideslope rather than a short- or mid-term destination.  We’ve provided you with a downloadable model where you can play with your Rule of 40 glideslope.  And we’ve shown why CFOs will inherently be drawn to the Rule of 40 as a long-term planning constraint, because in many ways it will help your company act like a self-righting ship.

[3] Rule of 40 score is generally defined as revenue growth rate + free cashflow (FCF) margin.  Sometimes operating margin or EBITDA margin is used instead because FCF margin can be somewhat harder to find.

[4] I’m trying to find data a good data set of Rule of 40 scores at IPO time but thus far haven’t found one.  Anecdotally, I can say that lots of successful high-growth SaaS IPOs (e.g., MongoDB, Anaplan, and Blackline) were not Rule of 40 compliant at IPO time — nor were they well after, e.g., as of Oct 2018 per JMP’s quarterly software review.  It seems that if growth is sufficiently there, that the profitability constraint can be somewhat deferred in the mind of the market.

This entry was posted in Financing, IPO, Metrics, Rule of 40, SaaS, Startups, Uncategorized, Venture Capital and tagged growth vs. profitability, Rule of 40. Bookmark the permalink.

3 responses to “Rule of 40 Glideslope Planning”