Every so often I post highlights from the quarterly Fenwick & West Venture Capital Survey, as much to share knowledge about the existence of the survey [1] as to share its current-quarter data.

This survey is important for two reasons.  First, it shows trends in price changes over time across various VC rounds.  This is useful information to see what’s happening in the market, and I suppose semi-useful information in perhaps timing your venture rounds (subject to Kellblog Rules 1 and 2 of Financing [2]).

But the really important of this survey is it tells you about terms.  Raising $20M with a 1x, non-participating preference is very, very different from raising $20M with an 8% accumulating dividend, a multiple, participating liquidation preference that ratchets from 1.5x to 1.75x to 2.0x over three years, and includes redemption rights [3].  If you’re a CEO or founder of a startup and don’t understand the prior sentence, you need to.  A good glossary, plus the F&W Survey, will help.

Let’s look at the survey highlights, starting with pricing and moving into terms.  81% of companies had financings that were “up rounds” (i.e., the share price was higher in the round last than the previous one).   On average this runs nearly 70%. 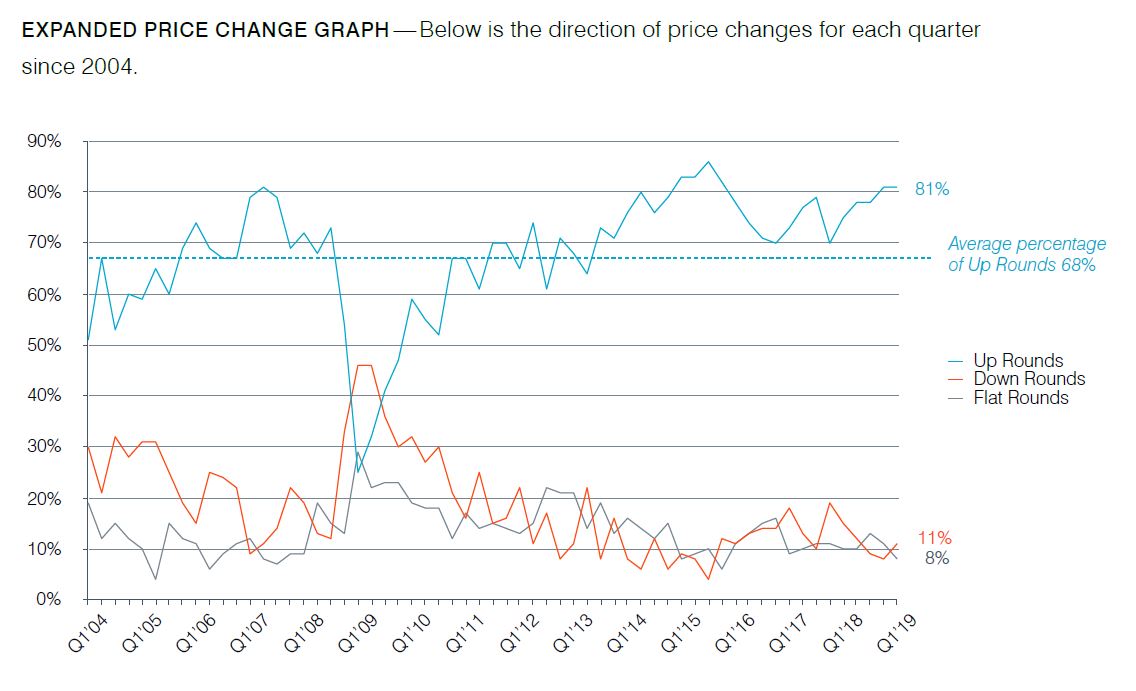 The chart shows the Fenwick & West (F&W) Venture Capital Barometer (TM), which measures the magnitude of the price change since the prior round.  In 1Q19, prices averaged 75% up since the company’s prior round, running high, but certainly not near historical highs of well over 100% 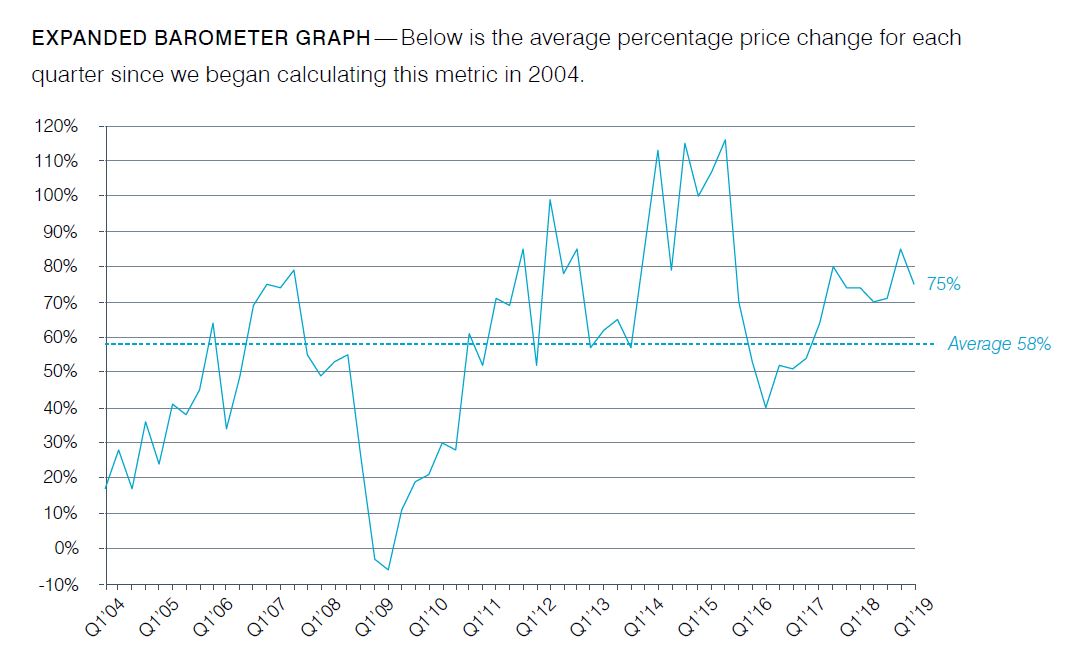 The report does a lot of nice segmentation.  Here is direction and magnitude price change data by sector.

Now we move onto financing terms.  For definitions, see the glossary F&W publishes along with the survey.  Better yet, read the Ultimate Guide to Liquidation Preferences by Charles Yu.

Senior liquidation preferences were used in 27% of rounds [4]. 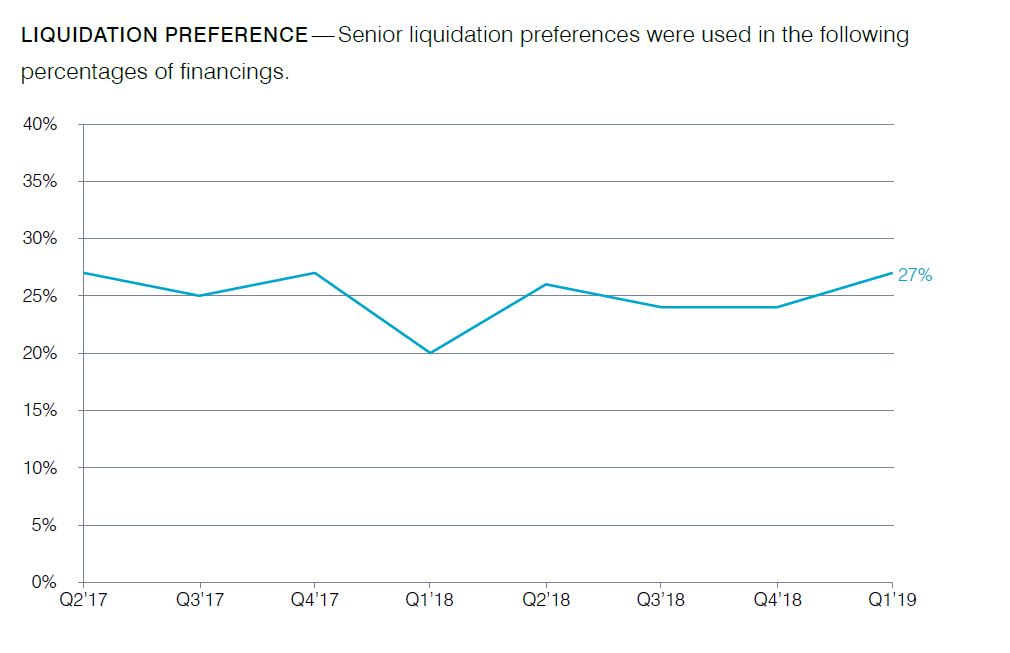 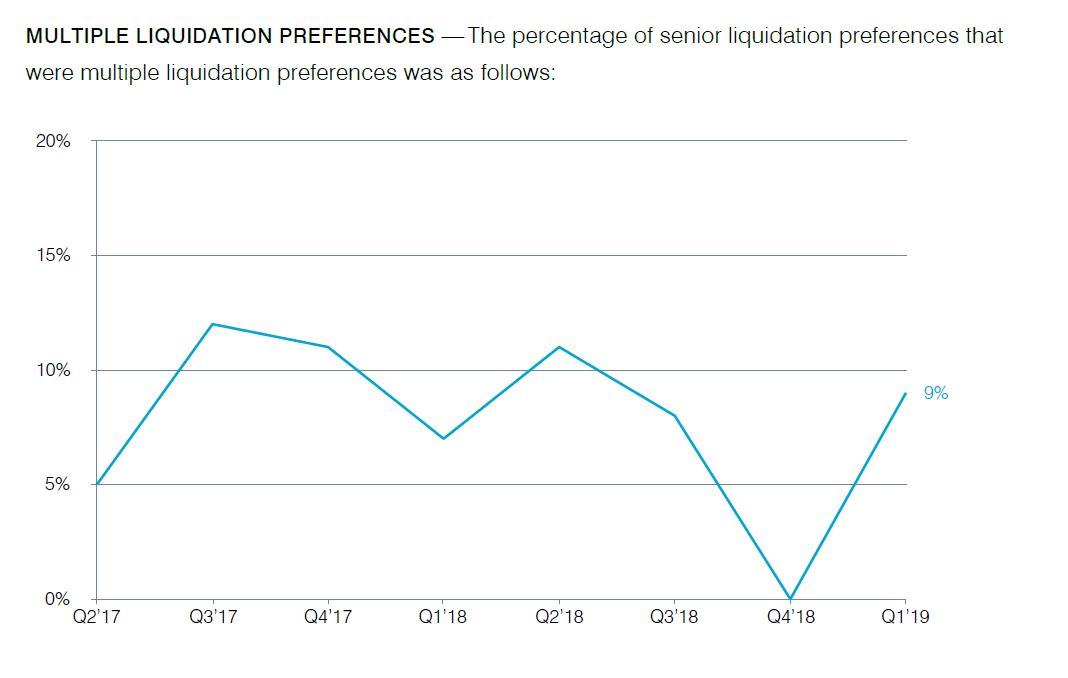 Participation means that the investor doesn’t have to choose between getting their money back and getting their pro rata share of the company.  Participating preferred shares first get their money back and then get their pro rata share of what’s remaining.  That’s why they’re sometimes called “double dip” preferred.  12% of rounds in 1Q19 had participation.  While F&W doesn’t break out the data geographically, I’ve always considered participation an “East Coast” VC term.  It’s also common in Europe as well. 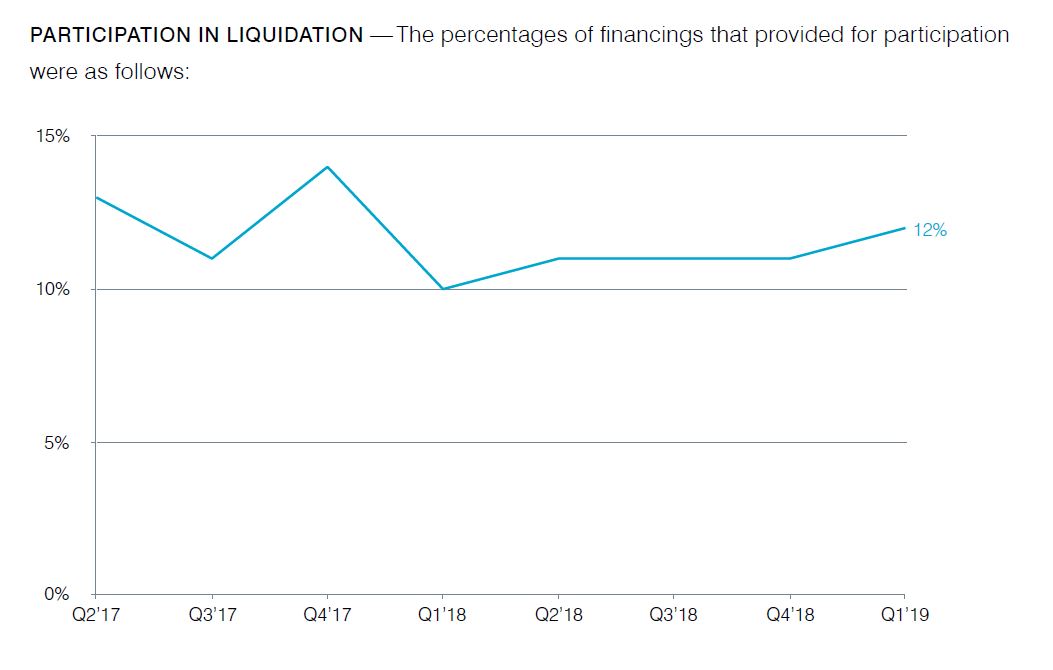 One way to limit the effects of participation is to cap it.  However, 65% of time participation is used, it is uncapped.  35% of the time, it is capped, which sounds like an improvement, but has the perverse consequence of creating a zone of indifference for the investor. 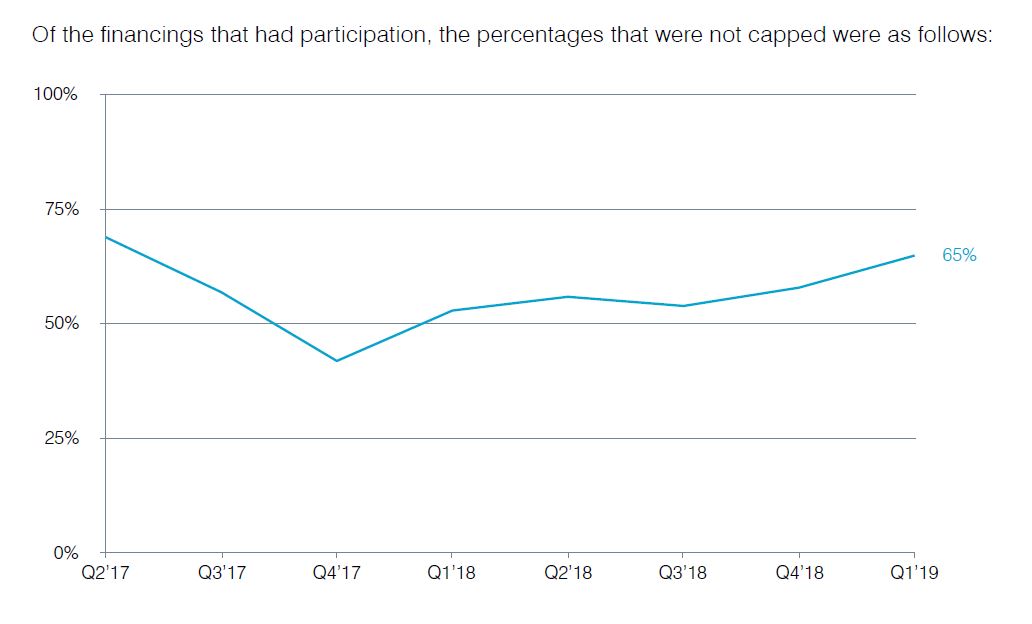 There’s lots more in the F&W survey which you can find here.

Before signing off, let me highlight one other interesting survey, the University of San Francisco Venture Capital Confidence Index (SVVCCI), which in February 2019 fell to its lowest value in the past 10 years — 3.20 out of 5.00, down from 3.52 in the prior quarter.

Unfortunately, they no longer make the full report instantly downloadable (you need to mail someone on the survey page to get a copy of it).  Nevertheless, it’s another interesting quarterly survey and I always try to read the two together.

[1] Much as I periodically post about the Bessemer Nasdaq Emerging Cloud Index for the same reason.

[2] Kellblog Rule 1 of Financing:  the best time to raise money is now.  Kellblog Rule 2 of Financing:  the best amount of money to raise is as much as you can (provided it’s at a good price).  Why?  In my opinion, too many startups press their luck, trying to delay financing in favor of hitting a few more consecutive quarters to limit dilution.  That works great — until it doesn’t — e.g., if you miss one of those quarters or if the markets turn on you.  As an example, there were two kinds of startups in 2002:  those that raised large amounts of money at crazy valuations in 2001 and dead.

[3] Terms generally do one of three things:  (a) reallocate the pie towards the investors in bad scenarios, i.e., “downside protection,” (b) provide minimum returns before others get their money, or (c) provide other rights (e.g., the right to sell the stock back to the company after N years) that can be used as forcing functions to get liquidity or control.

[4] Note that VCs buy preferred stock which is always senior to the common typically held by founders and employees. In this case, senior means senior to the other/earlier classes of preferred.  For example, if the series C gets all of its money back before the series B, then that would be a senior liquidation preference.  If series A, B, and C all got their money back on an pari passu basis, there would be no senior liquidation preference in this context.

[5] Meaning the investor gets not only his/her money back first, but some multiple (e.g., 1.5x) of it.  You can see how an investor might yield to an investor on a certain “vanity valuation” in exchange for a multiple liquidation preference, which ends up being close to a guaranteed return — e.g., if it’s on the last round, you’re first in line behind the debt with a guaranteed multiple (and maybe even more if you have participation).