I’m here in Vegas at the amazing Aria Hotel at Host Perform 2019, having been asked to come out and speak about one of my favorite topics – how boards see the work of finance and EPM.  That speech is tomorrow at 9:00 AM and I look forward to seeing you there.

Today started with a music video, a great re-interpretation of Joan Jett’s I Love Rock N Roll.  Here is my favorite lyric from the song:

Who cares about stock-based compensation?

So come and take the time and plan with me.

Ron Baden was subtly wearing a Life is Good cap (presumably as a tip of the proverbial hat to last year’s keynote, Burt Jacobs) as he did an introduction that covered his background – now 10 years with the company in almost as many different jobs, an introduction of the executive staff (along with 1980s photos of them), a history of EPM, and some discussion of Vector Capital’s acquisition of Host Analytics in December of last year.

Ron discussed highlights of the go-forward plan, including:

He also discussed key trends that Host is seeing in EPM: 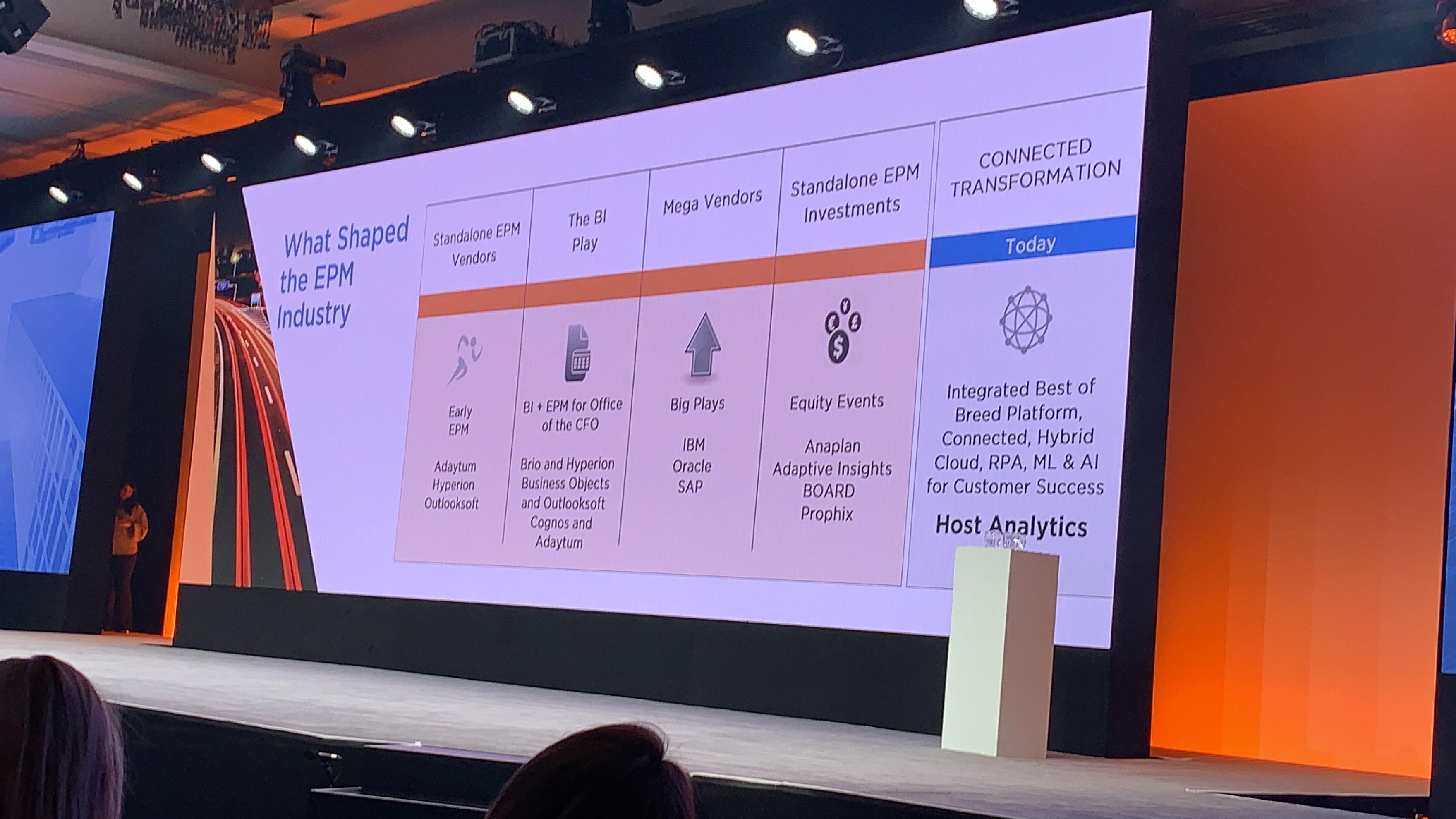 Ron had some fun demonstrating the granularity and context problems via a Netflix example (“who’s watching”) and a quick demonstration of Alexa’s non-fluency in finance. On the former point, the key idea is that AI/ML, for example in sales forecasting, will benefit greatly by knowing “who’s watching” (i.e., who’s selling) because much as different people like different genres of films, different sales reps have different patterns of forecasting (e.g., Sammy sandbag, Ollie optimist).

Ron also discussed the notion of the chief performance officer, as opposed to the chief financial officer – to focus the mission on improving performance, not on finance per se.  In my humble opinion most of the time when people talk about creating a new “O” it’s about trying to get a seat at the table (e.g., chief information officer back in the day, the chief information security officer in recent times, and the chief data officer today).

Since the CFO already has a seat at the table, I think Ron’s more talking about reframing the role and the vision of the CFO.  I agree – particularly when it comes to being able to answer questions that help improve business performance.  And, I believe, that if the CFO can’t migrate to being the CAO (chief answers officer) then the chief data officer (CDO) might well do it instead via data science and operations teams.  To be a bit paranoid, it’s a threat — not an existential threat, but a threat nevertheless — to the power of the office of the CFO.

Ron then showed a presumably future version of MyPlan which shows how to build task- and action-oriented EPM and how that can easily fit into a mobile device.  Ron’s a big believer that while spreadsheets and grid interfaces are great, that end-users fundamentally want to accomplish tasks that are best done not via a grid, but via an end-user-optimized, task-oriented interface like MyPlan.

They then performed the usual, multi-player, slice-of-life skit-demonstration (aka, “skidemo”) which is always fun, and always a challenge to execute with so many moving parts (i.e., people, real software, prototype software, videos, scene changes, characters, and costumes).  Despite a brief early wardrobe failure, the six-person team pulled it off just fine, taking the crowd “back to the future” of finance – with easy rolling forecasts that take just a minute to run and prescriptive analytics to help drive the planning process.  My favorite line:

The keynote speaker (coincidentally named “Doc” given the skit), founder of Wine to Water, Doc Hendley then took the stage to tell his story.  I won’t summarize it here, but it was genuine, moving, at times funny, and deeply compelling. 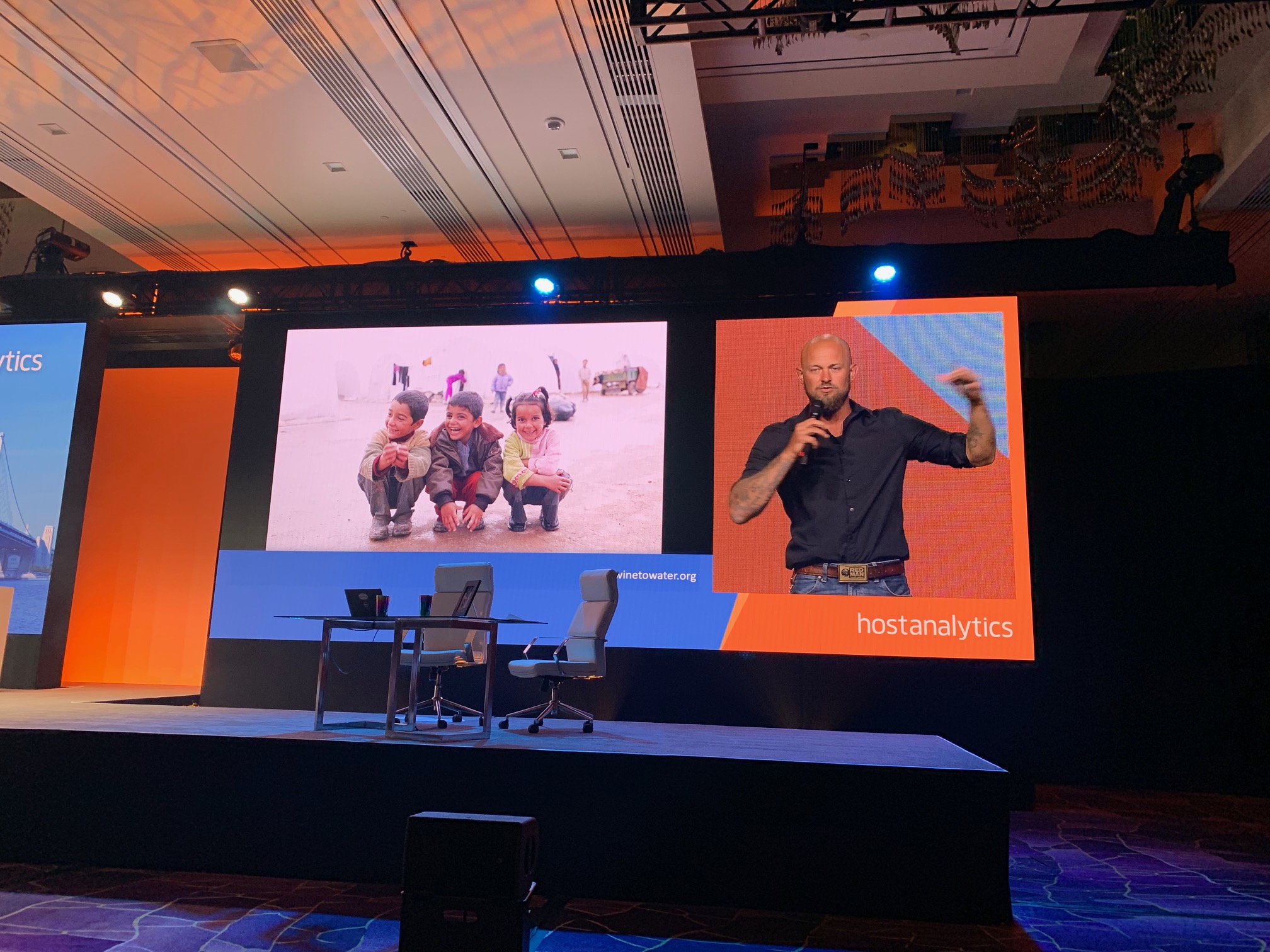 Wine to Water focuses on providing clean water and sanitation to people around the world – while awareness of this is not as high as it should be, water-borne illness is the leading cause of death for children in many countries in the undeveloped world and directly and indirectly kills over 2M children a year and incapacitates another 10M people atop that. Preventing water-borne illness not only saves lives, but it also helps increase family income, reduces school absences, and generally strengthens the local developing economy.  Per the WHO, every one dollar invested yields $8 in benefits — a great cause and a great ROI.

If you’re interested in donating to Doc’s organization, Wine to Water, please go here.  If you’re at the conference, remember to stop by the Wine to Water booth and build some water filters.

It’s great to be here, I look forward to seeing everyone, and hope to see you at my speech bright and early tomorrow.

This entry was posted in EPM, Host Analytics and tagged Doc Hendley, Wine to Water. Bookmark the permalink.