Career Decisions: What To Look For In a Software Startup

So, you’re thinking of taking a job at a startup, but are nervous about the risk, perhaps having trouble telling one from another, and unsure about knowing what’s really important in startup success.  In this post, I’ll share what I consider to be a great checklist for CXO and VP-level positions, which we’ll try to adapt a bit to be useful for all positions.

1. Great core/founding team.  Startups are about people.  We live in a founder-friendly VC era.  Thus, there is a good chance one or all of the founding team will be around, and in influential positions, for a long time.  If you’re CXO/VP-level, make sure you spend time with this team during your interviews [1] and make sure you think they are “good people” who you trust and who you’d want to work with for a long time [2].  You might well be doing so.

2. Strong investors.  In venture capital (VC) land, you should view investors as long-term partners in value creation.  Their investments give them contractual rights (e.g., board seats) and you can assume they will be around for a long time [3].  Companies need two things from their investors:  advice (e.g., the wisdom acquired from having built a dozen companies before) and money.  While good advice is always important, money is absolutely critical in today’s startup environment where a hot category can quickly evolve into a financial arms race to see which company can “buy” the most customers the fastest [4].

While I won’t do a tiering of Silicon Valley VCs here, you want to see investors with both deep pockets who can fund the company through thick (e.g., an arms race) and thin (e.g., inside rounds) and strong reputations such that other VCs are willing and eager to invest behind them in future rounds [5].

3. Newer company/technology.  I’ll give you the hint now that this is basically a list of key factors ranked by difficulty-to-change in decreasing order.  So the third hardest-to-change key factor is technology.  If you’re considering going to work at a twelve-year-old startup [6], understand that it’s very likely built on twelve-year-old technology premised on a twelve-plus-year-old architecture.  While the sales-and-marketing types will emphasize “its proven-ness” you will want to know how much technical debt there is associated with this old architecture.

Great startups are lead by strong technologists who ensure that technical debt is continuously addressed and retired via, e.g., trust releases.  Bad startups are feature addicts who pile feature upon feature atop a deteriorating architecture, creating an Augean Stables of technical debt. But even in good startups, routine debt-retirement doesn’t prevent the need for periodic re-architecture.  The best way to avoid an architectural mess of either type is to go to a newer startup, led by strong technologists, where the product is most probably built atop a modern architecture and where they definitionally cannot have accumulated a mass of technical debt [7].

4. Clean cap table.  I once took a job at a company where a VC friend of mine said, “they have a good business, but a bad cap table.”  Since I didn’t entirely understand what he meant at the time, I took the job anyway — but, wow, do I wish I’d spent more time trying to understand the phrase “bad cap table.”

A capitalization table (aka “cap table”) is simply a list of investors, the type and amount of shares they hold, shares held by founders, shares allocated to the stock option pool, warrants held by suppliers and/or debtholders, and along with information about any debt the company has acquired.  So, strictly speaking, how could this table be inherently good or bad?   It just “is.”  Nope.  There are good cap tables and bad cap tables and here’s a partial list of things that can make a cap table bad in the eyes of a future investor.

And that’s only a partial list.  At the CXO level, I think you have the right to ask about the cap table, but it’s much harder for job titles below that.  So I understand that you won’t always be able to access this information, but here’s what you can do:  (1) look at Crunchbase for financial history to try and identify some of these problems yourself, and (2) try to find a VC friend and get his/her opinion on the company.  VCs, particularly those at the bigger firms, are remarkably well informed and look at lots of deals, so they can usually give you an inkling about potential problems.

5. Strong market opportunity.  I’ve always done best when the need for the product was obvious.  Best example:  Business Objects in the 1990s — data warehouses were being built and it was obvious that there were no good tools to access them.  Business Objects eventually sold for nearly $7B.  Best counter-example:  MarkLogic in the 2000s — several years after Gartner wrote a note called XML DBMS:  The Market That Never Was.  That nearly twenty-year-old company is still not liquid, though through exceptional execution it has built a nice business despite strong headwinds; but there was nothing either obvious or easy about it.  In my other direct experience, the markets for Ingres (RDBMS), Salesforce.com, and Host Analytics (cloud EPM) were obvious.  The market for Versant (ODBMS) was not.

Another test you can apply to the market is the Market Attractiveness Matrix, which positions the type of buyer vs. the need for the product.  Selling SFA to sales, e.g., would be in the most attractive category while selling soft productivity improvement tools to HR would be in the least. 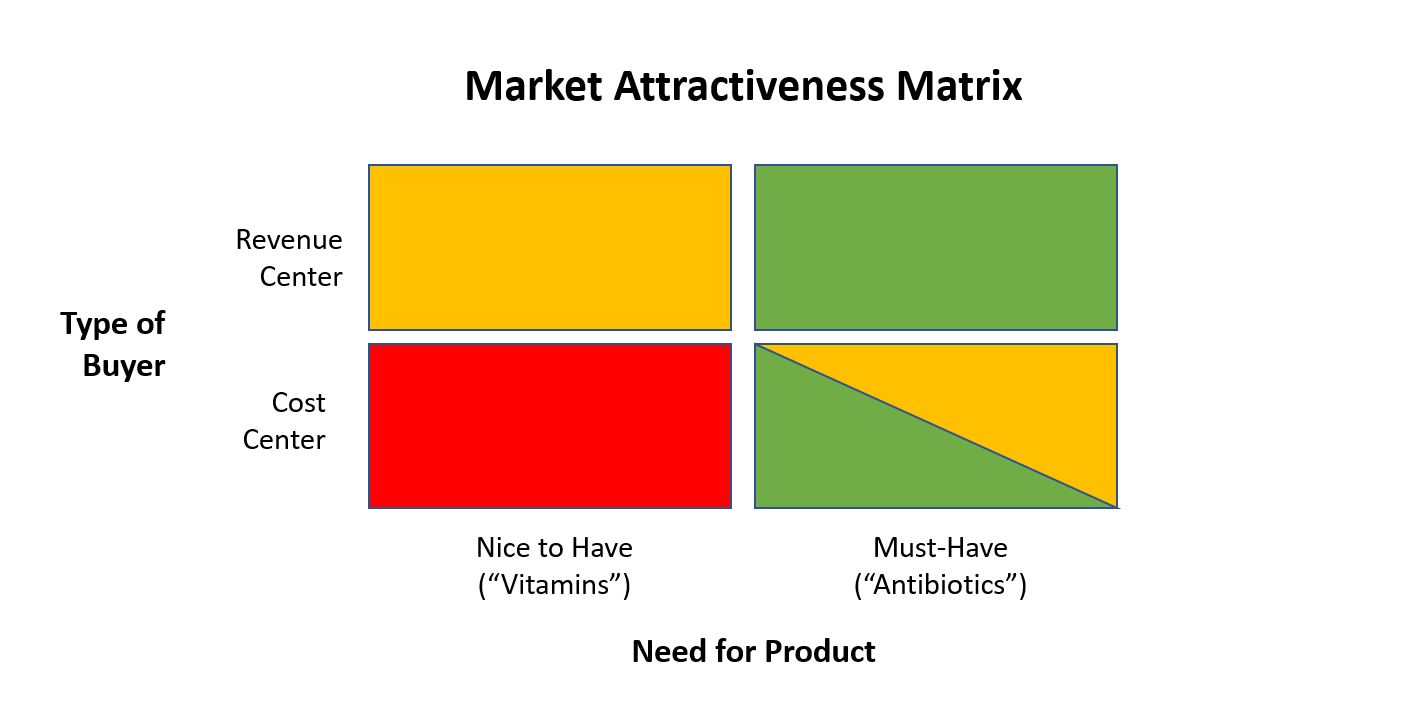 Finally, I also like markets where the pricing is tied to something that inherently goes up each year (e.g., number of salespeople, size of stored documents, potentially usage) as opposed to things that don’t (e.g., number of HR or FP&A people, which increases — but in a more logarithmic fashion).

6. Strongest competitor in the market.  The problem with obvious market opportunities, of course, is that they attract multiple competitors.  Thus, if you are going to enter a competitive market you want to ensure the company you’re joining is the leader in either the overall market or a specific segment of it.  Given the increasing returns of market leadership, it is quite difficult to take away first place from a leader without they themselves faltering.  Given that hope is not a strategy [9], unless a runner-up has a credible and clear plan to be first in something [10], you should avoid working at runner-up vendors.  See the note below for thoughts on how this relates to Blue Ocean Strategy [11].

7.  Known problems that you know how to fix.  I’ve worked at epic companies (e.g., Business Objects, Salesforce) and I’ve worked at strugglers that nearly clipped the tree-tops on cash (e.g., Versant) and I can assure you that all companies have problems.  That’s not the question.  The questions are (1) do they get what really matters right (see previous criteria) and (2) are the things that they get wrong both relatively easy to fix and do you know how to fix them?

Any CXO- or VP-level executive has a set of strengths that they bring to their domain and the question is less “how good are you” than “does the company need what you bring?”  For example, you wouldn’t want a sales-and-marketing CEO — no matter how good — running a company that needs a product turnaround.  The key here is to realistically match what the company (or functional department) needs relative to what you can bring.  If you’re not a CXO- or VP-level executive, you can still apply the same test — does the company’s overall and functional leadership bring what the company needs for its next level of evolution?

8. Cultural compatibility.  Sometimes you will find a great organization that meets all these criteria but, for some reason, you feel that you don’t fit in.  If that happens, I’d not pursue the opportunity because you are likely to both be miserable on a daily basis and not succeed.  Culture runs deep in both people and in companies and when it’s a not a fit, it’s very hard to fake it.  My favorite, well-documented example of this was Dan Lyons at HubSpot, detailed in his book Disrupted.  HubSpot is a great company and I’m pretty sure Dan is a great guy, but wow there was a poor fit [12].  My advice here is to go with your gut and if something feels off even when everything else is on, you should listen to it.

I know it’s very hard to find companies that meet all of these criteria, but if and when you find one, I’d jump in with both feet.  In other cases, you may need to make trade-offs, but make sure you understand them so you can go in eyes wide open.

[1] A lack of desire to spend time with you during the recruiting process should be seen as a yellow/red flag — either about you as a candidate or their perceived importance of the position.

[3] While “shareholder rotations” are possible (e.g., where firm B buys out firms A’s position) they are pretty rare and typically only happen in older companies (e.g., 10 years+).

[4] In my opinion, VC a few decades back looked more like, “let’s each back 5 companies with $20M and let the best operators win” whereas today it looks more like, “let’s capitalize early and heavily on the increasing-returns effects of market leadership and stuff (i.e., foie-gras) our startups with money, knowing that the market winners will likely be those who have raised the most cash.”  Note that while there is debate about whether this strategy yields the best returns (see foie gras link), there is less debate about whether this generates large companies in the market-leader pack.

[5] As one later stage investor told me:  “we prefer to work with syndicates with whom we’ve worked before” suggesting larger firms with more deals are preferable upstream and “if it ends up not working out, we’d much rather be in the deal with a highly respected firm like Sequoia, Accel, Lightspeed, or A16Z than a firm no one has ever heard of.”  Your upstream investors have a big impact on who is willing to invest downstream.

[6] Quip:  what do you call a twelve-year-old startup?  Answer:  a small business.  (Unless, of course, it’s high-growth and within striking distance of an IPO.)

[7] I would argue, generally, that newer startups tend to be built with newer business model assumptions as well.  So picking a newer company tends to ensure both modern architecture and contemporary thought on the business model.  For example, it’s hard to find a five-year-old enterprise software company built on an on-premises, perpetual license business model.

[8] Or, if an incubator makes itself a virtual cofounder in terms of common stock holdings in return for its incubation services.

[10] Either a segment or a segment that they believe will grow larger than today’s overall market.

[11] I feel obliged to mention that not all non-obvious market opportunities are bad.  As a big fan of Blue Ocean Strategy, I’d argue that the best market opportunities are semi-obvious — i.e., obvious enough that once you dig deeper and understand the story that they are attractive, but not so obvious that they attract a dozen ocean-reddening competitors.  Of recent enterprise software companies, I’d say Anaplan is the best example of Blue Ocean Strategy via its (emergent) strategy to take classic financial planning technology (hypercubes) and focus on sales planning in its early years.

[12] Note that I am not saying HubSpot is a perfect company and we can argue at great length (or more likely, quite briefly) about the strengths and weaknesses in typical Silicon Valley cultures.  And that’s all interesting academic debate about how things should be.  What I am saying is that when it comes to you, personally, for a job, why make yourself miserable by joining an organization where you know up-front that you don’t fit in?

10 responses to “Career Decisions: What To Look For In a Software Startup”