The First Three Slides of a SaaS Board Deck, with Company Key Metrics

I’m a SaaS metrics nut and I go to a lot of SaaS board meetings, so I’m constantly thinking about (among other things) how to produce a minimal set of metrics that holistically describe a SaaS company.  In a prior post, I made a nice one-slide metrics summary for an investor deck.  Here, I’m changing to board mode and suggesting what I view as a great set of three slides for starting a (post-quarter) board meeting, two of which are loaded with carefully-chosen metrics.

Slide 1:  The Good, The Bad, and the Ugly
The first slide (after you’ve reviewed the agenda) should be a high-level summary of the good and the bad  — with an equal number of each [1] — and should be used both to address issues in real-time and tee-up subsequent discussions of items slated to be covered later in the meeting.  I’d often have the e-staff owner of the relevant bullet provide a thirty- to sixty-second update rather than present everything myself.

The next slide should be a table of metrics.  While you may think this is an “eye chart,” I’ve never met a venture capitalist (or a CFO) who’s afraid of a table of numbers.  Most visualizations (e.g., Excel charts) have far less information density than a good table of numbers and while sometimes a picture is worth a thousand words, I recommend saving the pictures for the specific cases where they are needed [2].  By default, give me numbers.

Present in Trailing 9 Quarter Format
I always recommend presenting numbers with context, which is the thing that’s almost always missing or in short supply.  What do I mean by context? If you say we did $3,350K (see below) in new ARR in 1Q20, I don’t necessarily know if that’s good or bad.  Independent board members might sit on three to six boards, venture capitalists (VCs) might sit on a dozen.  Good with numbers or not, it’s hard to memorize 12 companies’ quarterly operating plans and historical results across one or two dozen metrics.

With a trailing nine quarter (T9Q) format, I get plenty of context.  I know we came up short of the new ARR plan because the plan % column shows we’re at 96%.  I can look back to 1Q19 and see $2,250K, so we’ve grown new ARR, nearly 50% YoY.  I can look across the row and see  a nice general progression, with only a slight down-dip from 4Q19 to 1Q20, pretty good in enterprise software. Or, I can look at the bottom of the block and see ending ARR and its growth — the two best numbers for valuing a SaaS company — are $32.6M and 42% respectively.  This format gives me two full years to compare so I can look at both sequential and year-over-year (YoY) trends, which is critical because enterprise software is a seasonal business.

What’s more, if you distribute (or keep handy during the meeting) the underlying spreadsheet, you’ll see that I did everyone the courtesy of hiding a fair bit of next-level detail with grouped rows — so we get a clean summary here, but are one-click away from answering obvious next-level questions, like how did new ARR split between new logos and upsell?

After that, I show net new ARR, an interesting metric for a financial investor (e.g., your VCs), but somewhat less interesting as an operator.  Financially, I want to know how much the company spent on S&M to increase the “water level” in the leaky bucket by what amount [3].  As an operator, I don’t like net new ARR because it’s a compound metric that’s great for telling me there is a problem somewhere (e.g., it didn’t go up enough) but provides no value in telling me why [4].

After that, I show upsell ARR as a percent of new ARR, so we can see how much we’re selling to new vs. existing customers in a single row.  Then, I do the math for the reader on new ARR YoY growth [5].  Ultimately, we want to judge sales by how fast they are increasing the water they dump into the bucket — new ARR growth (and not net new ARR growth which mixes in how effective customer success is at preventing leakage).

The next block shows the CAC ratio, the amount the company pays in sales & marketing cost for $1 of new ARR.  Then we show the churn rate, in its toughest form — gross churn ARR divided not by the entire starting ARR pool, but only by that part which is available-to-renew (ATR) in the current period. No smoothing or anything that could hide fluctuations — after all, it’s the fluctuations we’re primarily interested in [6] [7].  We finish this customer-centric block with the number of customers and the net promoter score (NPS) of your primary buyer persona [8].

Moving to the next block we start by showing the ending period quota-carrying sales reps (QCRs) and code-writing developers (DEVs).  These are critical numbers because they are, in a sense, the two engines of the SaaS airplane and they’re often the two areas where you fall furthest behind in your hiring.  Finally, we keep track of total employees, an area where high-growth companies often fall way behind, and employee satisfaction either via NPS or an engagement score. [9] 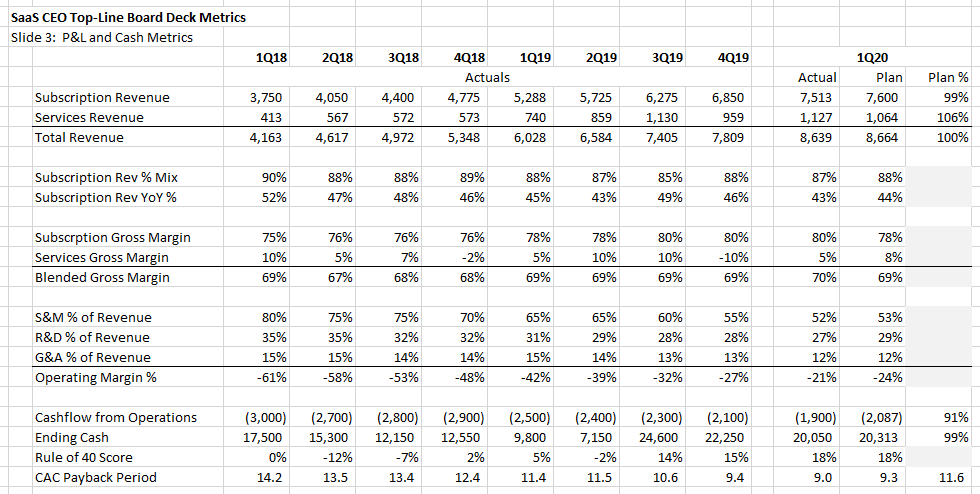 Your next (and final [10]) key metrics slide should include metrics from the P&L and about cash.

We start with revenue split by license vs. professional services and do the math for the reader on the mix — I think a typical enterprise SaaS company should run between 10% and 20% services revenue.  We then show gross margins on both lines of business, so we can see if our subscription margins are normal (70% to 80%) and to see if we’re losing money in services and to what extent [11].

We then show the three major opex lines as a percent of revenue, so we can see the trend and how it’s converging.  These are commonly benchmarked numbers so I’m showing them in % of revenue form in the summary, but in the underlying sheet you can ungroup to find actual dollars.

Moving to the final block, we show cashflow from operations (i.e., burn rate) as well as ending cash which, depending on your favorite metaphor is either the altimeter of the SaaS plane or the amount of oxygen left in the scuba tank.  We then show Rule of 40 Score a popular measure of balancing growth vs. profitability [12].  We conclude with CAC Payback Period, a popular compound measure among VCs, that I could have put on the operating metrics but put here because you need several P&L metrics to build it.

I encourage you to take these three slides as a starting point and make them your own, aligning with your strategy — but keeping the key ideas of what and how to present them to your board.

[1] I do believe showing a balance is important to avoid getting labeled as having a half-empty or hall-full perspective.

[2] I am certainly not anti-visualization or anti-chart.  However, most people don’t make good ones so I’d take a table numbers over almost any chart I’ve ever seen in a board meeting.  Yes, there is a time and a place for powerful visualizations but, e.g., presenting single numbers as dials wastes space without adding value.

[3] Kind of a more demanding CAC ratio, calculated on net new ARR as opposed simply to new ARR.  For public companies you have to calculate that way because you don’t know new and churn ARR.  For private ones, I like staying pure and keeping CAC the measure of what it costs to add a $1 of ARR to the bucket, regardless of whether it stays in for a long time or quickly leaks out.

[4] Did sales have a bad quarter getting new logos, did account management fail at expansion ARR, or did customer success let too much churn leak out in the form of failed or shrinking renewals?  You can’t tell from this one number.

[5] There are a lot of judgement calls here in what math you for the reader vs. bloating the spreadsheet.  For things that split in two and add to 100% I often present only one (e.g., % upsell) because the other is trivial to calculate.  I chose to do the math on new ARR YoY growth because I think that’s the best single measure of sales effectiveness.  (Plan performance would be second, but is subject to negotiation and gaming.  Raw growth is a purer measure of performance in some sense.)

[6] Plus, if I want to smooth something, I can select sections in the underlying spreadsheet using the status bar to get averages and/or do my own calculations.  Smoothing something is way easier than un-smoothing it.

[7] Problems are hard to hide in this format anyway because churn ARR is clearly listed in the first block.

[8] Time your quarterly NPS survey so that fresh data arrives in time for your post-quarter ops reviews (aka, QBRs) and the typically-ensuing post-quarter board meeting.

[9] Taking a sort of balanced scorecard of financial, customer, and employee measures.

[10] Before handing off to the team for select departmental review, where your execs will present their own metrics.

[11] Some SaaS companies have heavily negative services gross margins, to the point where investors may want to move those expenses to another department, such as sales (ergo increasing the CAC) or subscription COGS (ergo depressing subscription margins), depending on what the services team is doing.

[12] With the underlying measures (revenue growth, free cashflow margin) available in the sheet as grouped data that’s collapsed in this view.

This entry was posted in Board, CEO, Metrics, SaaS, Uncategorized. Bookmark the permalink.

7 responses to “The First Three Slides of a SaaS Board Deck, with Company Key Metrics”