In the land of disruption, there’s always something dying and something lining up to replace it, so we’re pretty used to hearing things like “on-premise is dead, long live SaaS.”  Sometimes, they’re right.  Despite the 2008-era views of our resident luddite below, SaaS really did kill on-premises. 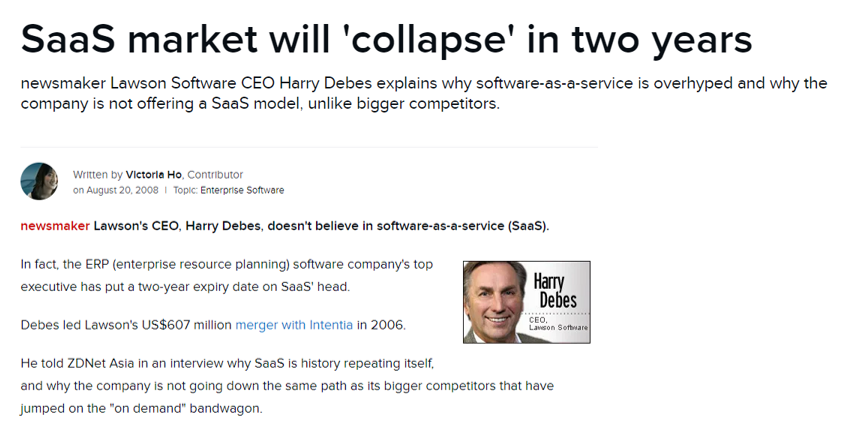 Sometimes, they’re both right and wrong.  Data lakes are doing pretty well, too.  Not everything is zero sum.

You don’t hear this just about technologies, but business models, too.

When the Internet eliminated sellers’ monopoly power over information, I heard, “traditional B2B sales is dead, long live facilitating buying processes.”  This was right and wrong.  B2B sales wasn’t dead, it just changed.  When buyers can get more information themselves and advance further without needing sellers, reframing sales as facilitating buying is a good idea.

When product-led growth (PLG) became the rage, you started to hear it again:  “traditional B2B sales is dead, long live PLG.”  While companies like Atlassian really did dispense with traditional B2B sales, other companies — like Zendesk, Slack, and Twilio — showed the power of blending the two models.  Heck, even Atlassian eventually blended them.

I think of PLG as embracing the continuation of a trend already started by the Internet.  In phase one, buyers no longer needed sellers to get basic product information.  (It’s almost hard to believe, but back in the day, if you wanted even a white paper let alone a demo, you had to talk to a seller.)  In phase two, buyers no longer needed sellers to get hands-on product trial.  It’s the same transformation, just applied to the next two phases down the funnel.

While some companies consider trials customers (and ergo need to count them in churn), I think most enterprise startups should consider trials leads, and the ones who do the right things with the product become leads worthy of passing to sales.  Because they’re qualified by product usage and not marketing actions, they’re called PQLs instead of MQLs.  (Ask my friends at Correlated, or any of the new PLG CRMs, to learn more.)

The other day an old friend of mine, now a highfalutin GM at a big-name software company, forwarded me this article, Traditional B2B Sales and Marketing are Becoming Obsolete.  So, anticipating the content, I donned my “it’s PLG and enterprise, not PLG or enterprise,” gloves and got ready to fight.

But I was surprised.  Instead of saying, “B2B sales is dead, long live PLG,” the article threw me a curveball:

Who wrote this, I think?  Ah, it’s some guy from Gartner.  Before I can add, “and they should stick to IT prognostication,” I see that “some guy” is Brent Adamson, coauthor of The Challenger Sale, one of my top five favorite sales books.

Darn.  Now I have to read this eight-page article and figure out what I think.  The rest of this post is the result.

The Article:  Summary and Analysis
The article argues that it’s no longer enough to try and integrate (in the sense of align) sales and marketing, we should instead unify them.  That’s because buyers have more access to information (including hands-on trials), buyers have access to that information via multiple channels (e.g., vendor websites, review sites), and buyers don’t want to interact with salespeople (which is not exactly new, though he argues that younger people want to interact with sellers even less than older ones).

Sales is thus fighting for relevancy in the buying process and seeking to regain customer access.  The linear model is dead, long live the unified model.  In short:

He begins with motherhood and apple pie:

The companies that best provide customers the information they most urgently seek, specifically through the channels they most clearly prefer, are in a far better position to drive commercial success in today’s rapidly evolving digital commercial landscape.

He moves into rhetoric to amp things up:

While once a relatively accurate proxy for the underlying buying behavior it was meant to approximate, the serial commercial engine is hopelessly out of date — and dangerously out of sync — with how today’s B2B buyers buy.

With a requisite Gartner dash of profundity:

Today’s buyers are not only channel agnostic in terms of behavior, they’re digitally dominant in terms of preference.

I think that means people like to research shit online before buying it.  Got it.  Stipulated.

I always say that any good sales pitch is 80% tee-up and 20% knockdown.  Now, on the receiving end of such a pitch, I need to advise some caution in that approach.  At some point people want to hear your solution; I’m on page 6 of what’s barely 8 pages and still waiting.  It’s always easier to agree on the problem than the solution (e.g., child poverty, wealth inequality, climate change).  It’s why the 80/20 formula works — you get people agreeing with you, sounding smart, heads nodding, and then you shift to a credible solution that drives your agenda.

Yet, here I am, about to learn how SMART Technologies found the answer to this pervasive problem by “rebuilding it from the ground up.”  But first, I need to learn about SMART Technologies.  I am now at page 6.75 of an 8.25 page article and still not heard the solution.

The answer:  completely dismantle traditional sales, marketing, success, and service altogether and reconfigure them into a unified commercial engine (UCE).

You create a UCE by:

Careful mapping of customers’ buying journeys across a range of predictable “jobs to be done” as part of a typical educational technology purchase.

Never one to miss a gratuitous Clayton Christensen reference, I have to observe that while I am big believer in his work and the jobs-to-be-done framework, I think this is something of a misapplication.  Christensen’s point was about innovation — if you think of products as hired instead of bought, and hired to do specific jobs, then you will anchor yourself in the customer’s point of view when contemplating new products and features.  Think:  not how can we make this milkshake tastier, but how can we make this milkshake more effective when it’s hired as a one-handed commuter breakfast.  What we’re talking about at SMART is simply mapping customer journeys.

When you do that careful mapping, this happens (or, at least, this is what happened at SMART):

Through that initiative the team identified five common buying jobs (Learn, Buy, Order/Install, Adopt, Support) and established an internal team specifically deployed to support each one, reassigning nearly every member of legacy marketing, sales, service, and success staff as a result. In all, over 250 team members received new job designations as part of the process.

You can’t do a re-org these days without creating a center of excellence, so SMART created three:

SMART created three centers of excellence, where they consolidated otherwise duplicative efforts across traditional functional boundaries, one for data and analytics, and one for customer insights and positioning, and one for creative and digital experience.

Those, by the way, sound like a good idea.  I like centralized, specialized support teams, particularly in areas where we’re trying to present one face to the customer.

And then, the re-organization:

Finally, the team then deployed their staff in geographically aligned “pods,” where each pod contains members supporting each of the respective five buying jobs. So, the pod for the southeast United States, for example, is made up of combination of individuals tasked with supporting the entire range of customer jobs from Learn to Support across all relevant digital and in-person channels (including third-party distribution).

In short, run your regions in the USA more like you run countries in Europe.

It’s neither a bad idea nor some insanely different approach.  It does create the need, however, for sophisticated regional leaders who are capable of aligning on both dimensions of the matrix.  Concretely:  is the French country marketing manager part of the French team or the marketing team?  Answer:  it’s a trick question.  The answer is both and they need to learn which way to look, when, as they face managerial decisions — e.g., look to the CMO for questions on messaging and positioning, look to the French country manager when prioritizing campaigns and investments.

I’m going to ignore the end of the article where the VPs of sales and marketing proudly introduce themselves “the former heads” of their respective departments, because they both seem to still work at the company and do something, though the article doesn’t say what their new titles and jobs are.  I’ll assume, hype and semantics aside, that they’ve implemented some sort of functional vs. pod matrix.  As one does with countries in Europe.

Before wrapping up, let me challenge some of the more detailed points in the tee-up.

I’ll conclude by saying I think the article misses the most important point in organizational design.  When it comes down the game on the field, who calls the plays and the audibles?  Sure, we have a playbook, and we all know the play we’re supposed to be running.  But things have changed.  There’s a new participant in the meeting.  They mentioned a new competitor who we didn’t know was in the deal.

With a group of talented people, they’ll usually be several different and vocal opinions expressed on how to proceed.  The AE may want to reschedule the meeting.  The SC wants to proceed with the demo.  The consultant thinks we shouldn’t be in the deal in the first place.  The sales manager thinks we can win it because the champion has our back.  What do we do?  Who calls the plays and the audibles that modify them?

In my mind, the person with the quota wins.  As the old joke goes about breakfast:  the chicken is participating, but the pig is committed.  In a world where accountability for results legitimizes decision-making authority, it’s not enough to have a pod/commune and say we can all work it out.  Sometimes we can’t.  And often we can’t fast enough.

Whether you call that person the regional pod leader or the country manager, the role needs to exist and they need to take lead on deal strategy. Everything else is a supporting resource.  Which is why I think marketing alignment with sales is enough.  Yes, we need to collaborate and yes we need smart managers to work in the functional/regional matrix.  Yes, in the case of marketing, we need field marketing to ensure ground-level local alignment.

But do we need to reorganize everything into regional pods?  No.  We just need to work together and be aware that buyers have more information, options, and control than ever before.

End note
The irony is I ran a company in a pod structure, MarkLogic, where we had vertical pods (aka, business units) where we didn’t have sellers, SCs, and consultants.  We had Federal sellers, Federal SCs, and Federal consultants — all working for a VP/GM of Federal.  Ditto for information & media.  But we did it not in the name of “traditional B2B sales is dead because buyers have more information,” but in the name of a vertical go-to-market strategy where we wanted specialization and alignment.  Pods can work.  It’s all about strategy first and organizational design to support strategy.