Marketing’s Uncomfortable Relationship with the Truth

“Advertising is legitimized lying,” said the English writer HG Wells.  Pop marketing guru Seth Godin wrote a book entitled, All Marketers Are Liars (but cleverly redacted the title).  Google suggestions reveal that people have plenty of questions about the authenticity of marketing:

Let’s just say that in the minds of many people marketing seems to have an uncomfortable relationship with the truth.  In this post we’ll explore that relationship via a number of stories I have seen and experienced over the course of my career.

Telling the Truth in the Most Positive Possible Manner
One of the first press releases I reviewed when I took over product marketing at Business Objects (long, long ago) bore this title:

Business Objects Ranked #97 on the Software 100

Was that true?  Yes, we were number 97 on this; we just squeaked in there.  Phew.  But were there alternative also-true ways to say the same thing?  Indeed, yes:

Both statements are true.  Marketing should be about telling the truth in the most positive possible manner.  But does it have to be the truth?  Yes.  That was a constraint in my mind for three reasons:

Unlike this TechTarget article, I don’t think “spin” is intentionally misleading.  It is, however, intentionally positive both in expression and point of view.

Truth in Advertising
Say you walked into a store and someone promised you this: 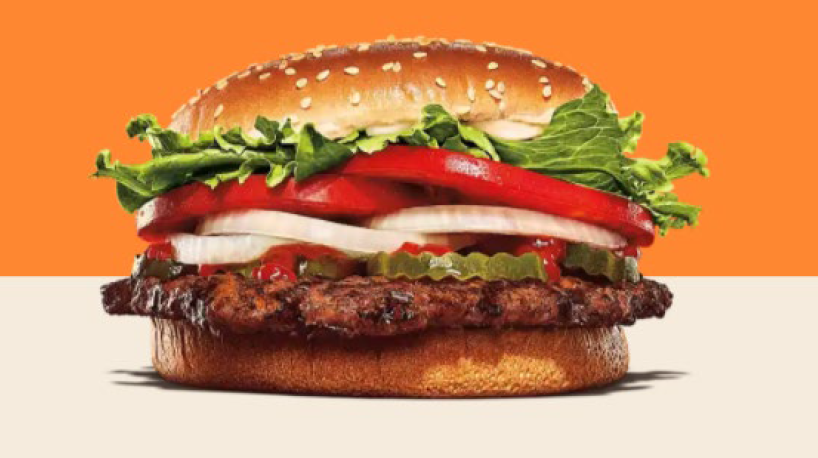 So you ordered one, and then they gave you this: 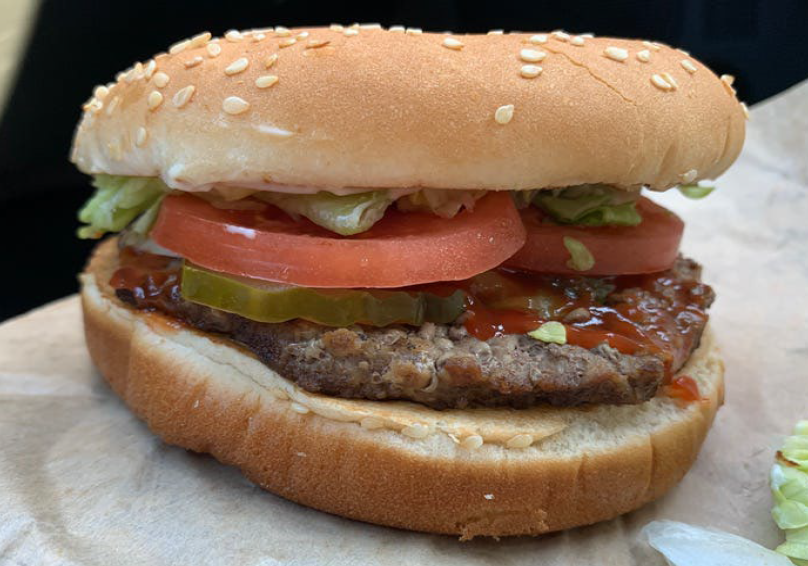 You’d likely be a bit disappointed, as was Walter Coleman who bought a Whopper (excuse the double entendre) in the state of New York and who, according to the class-action complaint, “expected the burgers that he purchased to be similar in size to the pictures of the burgers in Burger King’s advertisements and on Burger King’s store menu ordering board.”

The lawsuit alleges that Burger King violated the New York Deceptive Acts and Practices Act, N.Y. Gen. Bus. Law § 349 and similar laws in the other 49 states.

This is a class action against Burger King for unfair and deceptive trade practices concerning the sale of certain falsely advertised menu items.  Burger King advertises its burgers as large burgers compared to competitors and containing oversized meat patties and ingredients that overflow over the bun to make it appear that the burgers are approximately 35% larger in size, and contain more than double the meat, than the actual burger.

The legal system will decide how Burger King fares against these claims. At a high level, I believe you can make one of two arguments:

The second point argues that the pictures are effectively visual puffery, i.e., marketing claims that are harmless exaggerations that no reasonable person would believe (e.g., our detergent makes towels whiter than white).

Puffery is a valid defense against a false advertising claim.  And I can’t help but link to this cleverly-titled article when discussing puffery:  The Best Explanation and Update on Puffery You Will Ever Read.

The Lanham Act
While there have been some changes since my first encounters with it, the law that immediately springs to my mind is the Lanham Act, because that was the law usually referenced when I was on the receiving end of complaints.

Enacted in 1946, the Lanham Act addresses both trademarks (which we’ll largely skip today) and competitive practices, the latter including false advertising, which includes:

To prevail on a false-advertising claim under the Lanham Act, a plaintiff must satisfy the following elements: (1) a false or misleading statement of fact; that is (2) used in a commercial advertisement or promotion; that (3) deceives or is likely to deceive in a material way; (4) in interstate commerce; and (5) has caused or is likely to cause competitive or commercial injury to the plaintiff.

Thus, defending a claim made under the Lanham act usually takes the form of:

For more information, see False Advertising Litigation 101: Some Like it Misleading or Checklist for Suing (or Being Sued) under the Lanham Act.  Read both if you’re a marketing leader unfamiliar with this territory.  Try to read about a few recent cases as well (e.g., Pom Wonderful vs. Coca-Cola, Millercoors vs. Anheuser-Busch, or Chobani vs. Dannon).  Most of the cases are consumer products, but the law remains the same in technology.

Product Marketing Claims
The beauty of solutions-oriented marketing is that you generally get to steer free of legal problems.  As long as you describe a problem faced by a buyer (e.g., forecast accuracy) and how your product helps the buyer solve that problem (e.g., AI/ML-based forecasting), you should generally be safe.  As long as your product actually does help solve that problem.

Product marketing gets a bit more tricky for a few reasons:

Aside:  Setting the Agenda
Tech marketers sometimes get confused and think that a customer evaluation framework (e.g., a multi-column spreadsheet with features in the rows, a weight column to weight the importance of each feature, and a score column per vendor to rate each offering) is fixed — and thus their job is to maximize their product’s scores relative to the competition.

That view is myopic.  The most powerful technical marketing influences the framework itself by selling which features should qualify as rows.  Sometimes called “defining the playing field” — or if you’re changing an already-established evaluation framework, “moving the goal post” — these are both forms of what I call, “setting the agenda.”  That is, convincing people that your most powerful, differentiated features are the ones that matter most, and if you’re successful, then the matrix takes care of the rest.

To pick a real, but ancient, example.  Back before databases could execute procedural code, they could only evaluate SQL statements to select, update, insert, or delete rows in tables.  More than 30 years ago, Sybase changed all that by introducing stored procedures that included SQL statements, variables, and conditional logic.  The benefits of stored procedures were speed thanks to compilation (as opposed to repeatedly re-interpreting the same statements) and reduced network traffic (due to less client/server communication).

But instead of either patenting the invention or trademarking the name, they decided to set the agenda.  Give the feature a common name (i.e., not a trademarked name like Intelliprocs), make sure the market knew they invented the feature (through PR/AR and product marketing), and explain to buyers why they should shop for that feature (i.e., why that feature deserved a row in their evaluation spreadsheets).  When you do product marketing in this way, you’re not making Harvey Balls that competitors will sue you over and that customers won’t believe anyway.  Instead, you’re fighting to get your truly differentiated features rows in the spreadsheet and then, well, the rest takes care of itself.

Over time, of course, competitors counter these features and you need to make new ones.  But over time analysts will remember who’s innovating in the market, and in which direction (so ensure you have a bigger strategic narrative) and they’ll know who’s copying.  For more on how to stay ahead of this process, see my post entitled, The Market Leader Play.

Back to our subject, this approach keeps you out of messy and sometimes litigation-prone business of making specific comparative claims about features and benefits.  But sometimes, you have to do just that.

Comparative Claims
My first job in marketing was competitive analyst.  There is a time and a place for specific competitive claims and we’ll cover that now.

There are two types of situations in competitive:

There are three types of messages in competitive:

Does All This Matter?  A Closing Story
The net of all this is pretty simple.  Understand the law as part of your professional responsibility as a marketer.  Then:

In a world where it’s pretty clear that many marketers don’t do this, once in a while you start to wonder if it’s all worth it.  Why not be sloppy and fail to make precise leadership, uniqueness, and differentiation claims?  Even the faithful sometimes do wonder.

Then one day, you do an investor meeting at a public company.  The investor works at a large fund that has a $60M position in your employer.  They show up with your last three press releases, highlighted.  They walk through each release, in order, challenging you on every highlighted phrase.  You have conversations that sound like this:

Investor:  It says here that you’re the leading query, reporting, and analysis tool.  That’s not true.  Cognos is bigger.

You:  No, it doesn’t.  It says we’re the leading integrated query, reporting, and analysis tool.  Cognos isn’t integrated.  PowerPlay and Impromptu are separate products.

And then, for me at least.  It was all worth it.  Maybe a lot of people fail to notice when you’re rigorous and truthful in your marketing claims.  But some important ones do.

Disclaimer:  I am not now nor have I ever been a lawyer.  This post is not legal advice.  See FAQ for additional terms, conditions, and disclaimers.

This entry was posted in Marketing, Sales. Bookmark the permalink.

4 responses to “Marketing’s Uncomfortable Relationship with the Truth”