Everything You Need to Know About the CRO and CMO Working Relationship: In One Story

I had a chat with a CMO a while back.

DK:  How’s the relationship with your CRO going?
CMO: Solid. We collaborate really well.
DK: I’ve heard you’ve had some trouble hitting sales targets.
CMO: Yes, well you know the targets are pretty aggressive and we just had some major turnover in the sales force. But that’s all settled now. The new CRO joined 6 months ago and things are pretty stable now.
DK: So when you say you’re collaborating does that just mean you’re working together without incident or are you deeply collaborating — e.g., joined at the hip?
CMO: Deeply collaborating.  We’re not just going through the motions.  We talk about the hard problems.  We answer each other’s calls on the first ring.  The CRO always tells me that we have each other’s backs.
DK:  So what are those problems?  By the way, the CEO told me they think it’s a top-of-funnel issue.
CMO: Well, yes, it’s certainly part top-of-funnel, but our close rates are pretty grim as well.
DK: How grim?
CMO: We close about 5% of our opportunities.
DK: You close 5% of your sales-accepted opportunities?
CMO: Well, we’re actually closing 5% of our post-demo opportunities. That’s stage 4. The CRO thinks it makes more sense to calculate the close rate from the demo stage [1].
DK: I see.  What else?
CMO:  The slip rate is bad, more than half of deals slip out of the quarter.  No-decision is our top loss reason code in the CRM.
DK: Sounds to me like a pretty standard emerging space problem.  Everyone’s trying to figure out the market. Nobody has budget in the category. People aren’t sure what it is. But a lot of people are interested.
CMO:  Yes, a lot of tire kickers.
DK:  Are any of your direct competitors crushing it or are you all dealing with the same issues?
CMO:  As far as I can tell, we’re all largely in the same boat.
DK:  So is this a top-of-funnel problem or is it broader?
CMO:  It’s broader.  Both the CRO and I agree that we have two problems:  we are not closing enough of the pipeline we have and we need more pipeline.  Because of the second problem, we’ve raised our pipeline coverage goals to 4x.  Originally the CRO wanted 5x but I negotiated it down.
DK:  What’s the budget situation?
CMO:  Well, in order to improve efficiency in CAC ratio, we’re holding the marketing budget basically flat over last year.  The sales budget is going up 50%, though, in order to pay for those hires needed for growth.
DK:  I see.
DK:  Last question, who spends more time with the CEO, you or the CRO?
CMO:  Oh the CRO does. They spend a lot of time together, working on board slides, financing decks, and operating models and such.  The CEO leaves me pretty empowered to run marketing.

There’s Something Happening Here.  What It Is, Is Actually Clear.
Paraphrasing Buffalo Springfield, there’s a ton in this all-too-common scenario to chew on [2].  Before addressing the key point of this post — about the CMO/CRO relationship — let’s take a quick minute to discuss the business situation, because I’m guessing that Kellblog readers can’t wait to tackle that first.

My Take on the Situation
Given that conversation, here’s what I think about the business.

That’s it, in my opinion.  No more, no less.  Like any Silicon Valley startup with top investors, the company [3] likely has a founder who knows the space, a qualified management team [4], and has built a product that delivers against the initial vision.

The reality is that once in a while you land in the exact right place at the exact right time and everything takes off.  Pretty often, however, you don’t.  It doesn’t mean your vision is wrong or your product doesn’t work or your team sucks.  You just need to debug your model, refine your focus, and give yourself some time.

If the CEO has hired a strong CRO and a strong CMO, the worst thing they can do at this point is start a blame game.  What you want is a Three Musketeers  team with an all for one and one for all spirit.  The CEO, CRO, and CMO all working together to solve the company’s fairly obvious if also fairly challenging problems.

What you don’t want is a simplistic explanation and a circular firing squad that results in one, two, or even all three of those musketeers getting shot while the company struggles.  That’s what is likely happening in our scenario, and because it’s somewhat subtle, let me spell it out.

The Blame Game
The first rule of being a CMO:  if you look up and see this, you’re under the bus. 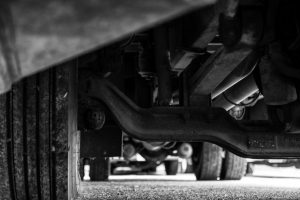 The view from under the bus

The CMO is squarely under the bus here.  How do I know?

What To Do Instead
While I’ve touched on it above, solving the company’s strategy problem is worth a book if not a full post, so here I’ll focus on the CMO/CRO relationship.

This doesn’t always work.  Sometimes the company is just in a rough position in the market.  However, sometimes it does.  And when it does, it skips an entire executive replacement cycle, allowing the company to answer its key questions faster, and gain important time-to-market advantages, not to mention avoiding costs related to momentum and morale.

[3]  As with any Kellblog post, all examples are derived from reality but ultimately not any one company, but a hybrid of scores of companies and situations I’ve seen over three decades in enterprise software.  Everyone always seems to think it’s about them!

[4]  As I have actually said to VCs who took no comfort in the statement:  “it’s improbable that our off-plan performance is due to our own incompetence;  we are all hiring the same SDRs, reps, and managers, all from the same hiring pool, giving them roughly equivalent marketing support hired from the same marketing pool, and paying them on the same compensation plans.”  Standardization of the model and labor pool serve as risk isolators in Silicon Valley.  VCs know that, which is why in general they prefer hiring veterans to up-and-comers.  They still hated the statement and I wouldn’t recommend saying it, even if you might think it once in a while.

[5]  You might argue that I’m a partisan former CMO contriving an example against sales, but remember I was also CEO of two startups for over a decade.  More importantly, as a consultant / director / advisor, all I want to do is solve the problem.  That perch makes it easier to see what’s actually happening.  I don’t care whose to blame.  If I met someone I think is incompetent I’ll say so.  If I think it’s a bunch of good people in a tough situation, I’ll say that, too.

[6]  Some would instantly blame this weak conversion rate on marketing:  “see, the 5% conversion rate proves the pipeline is junk.”  Marketing could fire back:  “but sales accepted these opportunities, that means definitionally they were qualified, and sales couldn’t close them.”  In my balanced view, I’m not assigning blame to anyone.  I’m simply saying the company has two problems:  light pipeline coverage and a weak conversion rate.   Saying there’s only one is what’s partisan.

[7]  To be clear, this means that marketing is not just responsible for creating sales-accepted opportunities, but for ensuring they reach the demo stage (typically two stages later).  Sales then become responsible for closing say 20% of those, instead of 20% of stage 2s, which have been subjected to two additional layers of filtering.  The lowers the bar for sales and raises it for marketing.  Most important, it renders effectively meaningless the notion of sales-accepted opportunity.

3 responses to “Everything You Need to Know About the CRO and CMO Working Relationship: In One Story”