How Quickly Should You Grow to Key ARR Milestones? The Rule of 56789

When you make a list of key SaaS metrics, you’ll rarely find age listed among them.  That’s correct in the sense that age by itself tells you little, but when size is measured against age, you get a rough measure of velocity.

All this begs the question of growth velocity:  at what age is a given size impressive?  Towards that end, and working with my friends at Balderton Capital, I’ve come up with what I’m calling the Rule of 56789.

Concretely put, if you walk through the doors to Balderton’s London offices with $54M in ARR after 7 years, you’ll be in the top quartile of those who have walked before you. 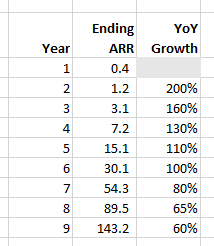 Three Situtions That Break The Rule
Rules are made to be broken, so let’s talk about three common situations which confound the Rule of 56789.

Alternative Growth Velocity Rules
Let’s compare the trajectory we showed above to similar one generated using a slightly different rule, which I’ll call the 85% Growth Retention Rule, which says to be “impressive” (as defined above), you should:

I view these as roughly equivalent rules, or more precisely, alternate expressions of nearly the same underlying rule.  I prefer 56789 because it’s more concrete (i.e., do X by Y), but I think 85% growth retention is somewhat more general because it says no matter where you are and how you got there, try to retain 85% (or more) of your growth rate every year.  That said, I think it stops working at 8-10 years because the asymptote on great company growth is somewhere around 40% [10] and some would argue 60% [11].  It also fails in situations where you need to reaccelerate growth.

There’s one well-known growth velocity rule to which we should also compare.  The triple/triple/double/double/double (T2D3) rule, which says that once you hit $2M in ARR, you should triple to $6M, triple again to $18M, then double three times to $36M, $72M, and $144M.

Clearly T2D3 is more aggressive and sets a higher bar.  My beef is that it fails to recognize the law of large numbers (by failing to back off on the growth rates as a function of size across considerable scale), so as an operator I’m more intuitively drawn to the 85% Growth Retention rule.  That said, if you want to be top 5% to 10% (vs. top 25%), then go for T2D3 if you can do it [12].  You’ll clearly be creating a lot more value.

I like all of these rules because they help give you a sense for how quickly you should be getting to a certain size.  Growth conversations (e.g., trying to get a CRO to sign up for a number) are never easy.  Rules like these help by providing you with data not about what the average companies are doing, but what the great ones are.  The ones you presumably aspire to be like.

The limitation, of course, is that none of these rules consider the cost of growth.  There’s a big difference between a company that gets to $100M in 9 years on $100M in capital vs. one that does so on $400M in capital.  But that’s why we have other metrics like cash conversion score.  Different metrics measure different things and these ones are focused solely on size/growth vs. age.

A big tip of the hat to Michael Lavner at Balderton Capital for working with me on this post.

[1] See the definition of small business, which is somewhat broader than I’d have guessed.

[3] It’s not as if just anybody can do either.  Founding a company and building it to $10M is impressive, regardless of the timeframe.

[4] Balderton universe = European SaaS startups who wanted to raise venture capital, who were sufficiently confident to speak with (what’s generally seen as) a top-tier European firm, and who got far enough into the process to submit performance data.

[7] The rule would probably be more useful in projecting the future of VC-backed competitor.  (I think sometimes bootstrapped companies tend to underestimate the aggressiveness of their VC-backed competition.)  This could help you say, “Well, in N years, BadCo is likely to be a $50M business, and is almost certainly trying to be.  How should that affect our strategy?”

[8] That said, be sure you’re really building a mininum viable product and not overengineering either because it’s fun or it allows you to delay the scary of moment of truth when you try to sell it.

[9] Financings after a pivot sometimes require a recapitalization, in which case the company’s entire lifeclock, from strategy to product to cap table, are all effectively reset.

[12] I’ll need to take a homework assignment to figure out where in the distribution T2D3 puts you in my data set.

This entry was posted in Uncategorized and tagged 85% Growth Retention Rule, Rule of 56789, T2D3. Bookmark the permalink.

One response to “How Quickly Should You Grow to Key ARR Milestones? The Rule of 56789”