Dear Marketing: Stop Putting the Template Ahead of the Story

I’ve always thought that if marketers wrote newspapers, the famous New York Times headline of August 8, 1974 would have looked like this:

Instead of how it actually looked, which was: 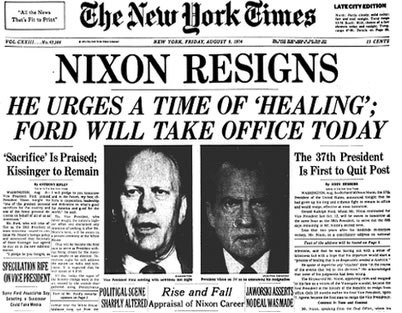 What’s the difference?  While both of the above presentations are structured, the newspaper doesn’t let the template get in the way of story.  The newspaper works within the template to tell the story.

I think because marketing departments are so often split between “design people” and “content people,” that (1) templates get over-weighted relative to content and (2) content people get so busy adhering to the template that they forget to tell the story. 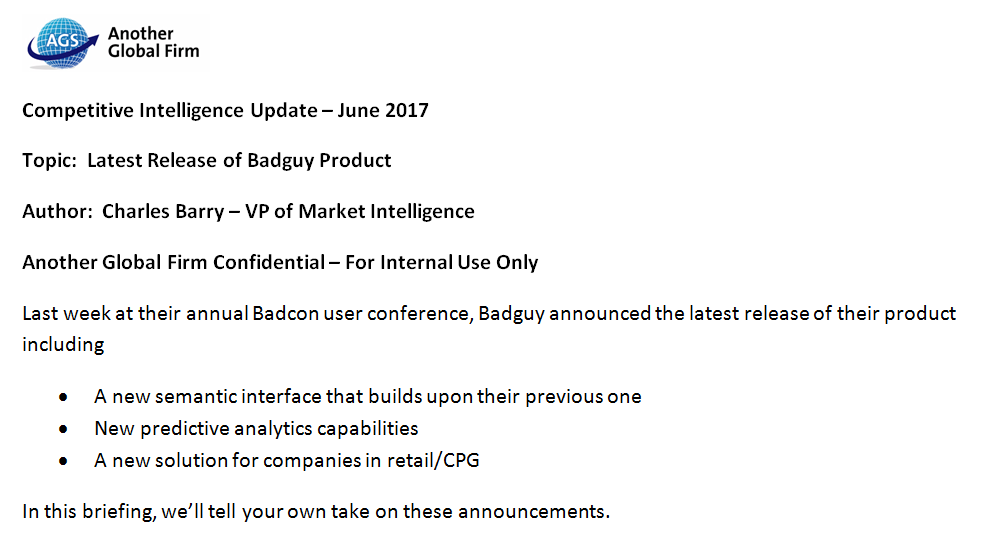 But there is one, much more serious problem with this:  the claim / rebuttal structure of the document lets the competitor, not the company, control the narrative.

For example, political affiliations aside, consider current events between Trump and Comey.  Like him or not, Trump knows how to control a narrative.  With the claim / rebuttal format, our competitive bulletin would read something like this if adapted to the Trump vs. Comey situation.

Great.  What are we talking about?  Whether Comey is a leaker, liar, or coward.  Who’s controlling the narrative?  Not us.

Here’s a better way to approach this document where you rework the header and metadata, add a story to the title, recharacterize each piece of the announcement on first reference (rather than saying it once “their way” and then challenging it), and then providing some broader perspective about what’s happening at the company and how it relates to the Fall17 release.

This is a very common problem in marketing.  It comes from a lack of storytelling and fill-in-the-template approach to the creation of marketing deliverables.  Avoid it by always remembering to put the story ahead of the template.

Just likes blogs and newspapers do.

During our recent Digital Publishing Summit in New York, I had the opportunity to slip aside and take a few moments to interview Gordon Crovitz, former publisher of The Wall Street Journal, and more recently a founder of Journalism Online, a group created to enable news publishers to generate new revenues from readers and distributors for their digital content and by finding the optimal mix of circulation and advertising revenue necessary to finance original reporting and editing.

Our marketing team decomposed the discussion into three two-minute interviews. I’ve embedded them below.

Part I: We Never Considered Making the WSJ Free

Part II: It’s About the News, not the Newspaper

Judging by the recent announcement from the New York Times, I’d say that some key newspapers are listening to what Gordon has to say. For more information about Gordon’s current endeavor, you can go to Journalism Online.

To see highlights from the recent Mark Logic Digital Publishing Summit, see the video below.

Gordon Crovitz on Brands and Newspapers

Here’s a nice video clip of Gordon Crovitz, former publisher of The Wall Street Journal, talking about some of the peculiarities of the newspaper business and branding.

Continuing my recent rants about newspapers, please see this interesting story in the New Yorker by James Surowiecki, author of The Wisdom of Crowds, entitled News You Can Lose.

On the source of the problems:

There’s no mystery as to the source of all the trouble: advertising revenue has dried up. In the third quarter alone, it dropped eighteen per cent, or almost two billion dollars, from last year. For most of the past decade, newspaper companies had profit margins that were the envy of other industries. This year, they have been happy just to stay in the black. Many traditional advertisers, like big department stores, are struggling, and the bursting of the housing bubble has devastated real-estate advertising. Even online ads, which were supposed to rescue the business, have declined lately, and they are, in any case, nowhere near as lucrative as their print counterparts.

While I’ve always seen publishers, and newspapers in particular, as challenged with The Innovator’s Dilemma, before reading this article for some reason I’d never associated them with another of my favorite essays, Marketing Myopia (PDF for sale), by Harvard marketing guru Theodore Levitt.

While I love Levitt’s thoughts on marketing, the usual objection to Marketing Myopia is: say Penn Central Railroads had fully envisioned the future — just because they successfully ran a railroad, do you actually believe that Penn Central Airlines would have been a big success? Even fully informed, can you get there from here? Put differently, seeing the future and having the core competencies to compete in the future are two different things.

I have a similar objection on behalf of newspapers. It’s one thing to anticipate the whittling away of your classified ad business. It’s quite another to have the skillset and Internet savvy to come up with Craigslist. In fact, if you could travel back in time and tell the Tribune Company about their future, how much do think they could have changed?

I hate to be fatalistic here and yes, they wouldn’t have let themselves get involved in a highly leveraged buy-out — but financing strategy aside — do you think it would have changed much? Even with a fully informed visitor from the future whispering in their ear, do you think they ever could have made a Tribuneslist successful? And even if they could, what about economics. Craigslist runs a nationwide classified advertising platform and does it with about 25 staff.

The peculiar fact about the current crisis is that even as big papers have become less profitable they’ve arguably become more popular. The blogosphere, much of which piggybacks on traditional journalism’s content, has magnified the reach of newspapers, and although papers now face far more scrutiny, this is a kind of backhanded compliment to their continued relevance. Usually, when an industry runs into the kind of trouble that Levitt was talking about, it’s because people are abandoning its products. But people don’t use the Times less than they did a decade ago. They use it more. The difference is that today they don’t have to pay for it.

He continues with a great soundbite:

The real problem for newspapers, in other words, isn’t the Internet; it’s us.

We want access to everything, we want it now, and we want it for free. That’s a consumer’s dream, but eventually it’s going to collide with reality: if newspapers’ profits vanish, so will their product.

This argument is right in line with the “free ride” concept that I blogged about a few days ago. He concludes:

For a while now, readers have had the best of both worlds: all the benefits of the old, high-profit regime—intensive reporting, experienced editors, and so on—and the low costs of the new one. But that situation can’t last. Soon enough, we’re going to start getting what we pay for, and we may find out just how little that is