The point is that these ambiguous, unitless conversations happen all the time in enterprise software companies.  This isn’t a post about confusion; the vast majority of the time, everyone understands exactly what is being said.  What those implicit units really tell you about is culture.

Since there can be only one lead metric, every company, typically silently, decides what it is.  And what you pick says a lot about what you’re focused on.

While your choice of lead metric certainly affects the calculations of other metrics (a bookings CAC or a terminal-ARR CAC) that’s not today’s point, either.  Today’s point is simple.  What you pick says a lot about you and what you want your organization focused on.

For example, in my opinion:

This isn’t about a right or wrong answer [7].  It’s about a choice for your organization, and one that likely changes as you scale.  It’s about mindfulness in making a subtle choice that actually makes a big statement about what you value.

Notes
[1] For clarity’s sake, ARR is annual recurring revenue, the annual subscription value.  ACV is annual contract value which, while some treat as identical to ARR, others treat as first-year total contract value, i.e., first-year ARR plus year-one services.  Bookings is usually used as a proxy for cash and ergo would include any effects of multi-year prepayments, e.g., a two-year, prepaid, $100K/year ARR contract would be $200K in bookings.  TCV is total contract value which is typically the total (subscription) value of the contract, e.g., a 3-year deal with an ARR stream of $100K, $200K, $300K would have a $600K, regardless of when the cash payments occurred.  New ARR is new ARR from either new customers (often called New Logo ARR) or existing customers (often called Upsell ARR).  Net New ARR is new ARR minus churn ARR, e.g., if a regional manager starts with $10,000K in their region, adds $2,000K in new ARR and churns $500K, then net new ARR is $1,500K.  Committed ARR (as defined by Bessemer who defined the term) is “contracted, but not yet live ARR, plus live ARR netted against known projected ARR churn” (e.g., if a regional manager starts with $10,000K in their region, has signed contracts that start within an acceptable time period of $2,000K, takes $200K of expected churn in the period, and knows of $500K of new projected churn upcoming, then their ending committed is ARR is $11,500K.  (Why not $11,300K?  Because the $200K of expected churn was presumably already in the starting figure.)  Terminal ARR the ARR in the last year of the contract, e.g., say a contract has an ARR stream of $100K, $200K, $300K, the terminal ARR is $300K [1A].  Contracted ARR is for companies that have hybrid models (e.g., annual subscription plus usage fee) and includes only the contractually committed recurring revenues and not usage fees.

[1A] Note that it’s not yet clear to me how far Bessemer goes out with “contracted” ARR in their committed ARR definition, but I’m currently guessing they don’t mean three years.  Watch this space as I get clarification from them on this issue.

[3] On the assumptions that bookings is being used as a proxy for cash, which I recommend, but which is not always the case.

[4] e.g., non-recurring engineering; a bad thing to be focused on.

[5] Although if they all do so in different timeframes it becomes less meaningful.  Also unless the company has a track record of actually achieving the contractually committed growth figures, it becomes less credible.

[6] Which it never actually is in my experience, but it is a matter of degree.

[7] Though your investors will definitely like some of these choices better than others.

Are You Counting Payments as Renewals?

Enterprise SaaS has drifted to a model where many, if not most, companies do multi-year contracts on annual payment terms.  How did we get here?

When you combine the vendor’s desire to lock in the longer term with the customer’s belief that the solution is going work, you find a fertile ground for doing two- or three-year contracts.  But these multi-year deals are almost always done on annual payment terms.

Most SaaS vendors don’t want to take the next step and ask for a multi-year prepayment.  The upside for the vendor would be to eliminate the need for collections in years 2 and 3, and eliminate the chance that the customer — even if unhappy — won’t make the out-year payments.  But most vendors refrain from this because:

Thus, we end up in a situation where the norm has become a two- or three-year contract with annual payments.  This begs a seemingly simple “if a tree falls in the forest and no one hears it, did it make any noise” kind of question:

But let’s be clear, regardless of the process you use to manage them [4], they are not the same, and should not automatically be treated as such for the purposes of calculating SaaS metrics. One is the voluntary renewal of a subscription contract; the other is the payment of a contractual commitment.

Let’s consider an example.  We have six customers, Alpha through Foxtrot.  The first three did one-year deals, the second three did three-years deals.  The simple question is:  what’s your gross dollar retention?  A merely acceptable 83% or a very healthy 95%? 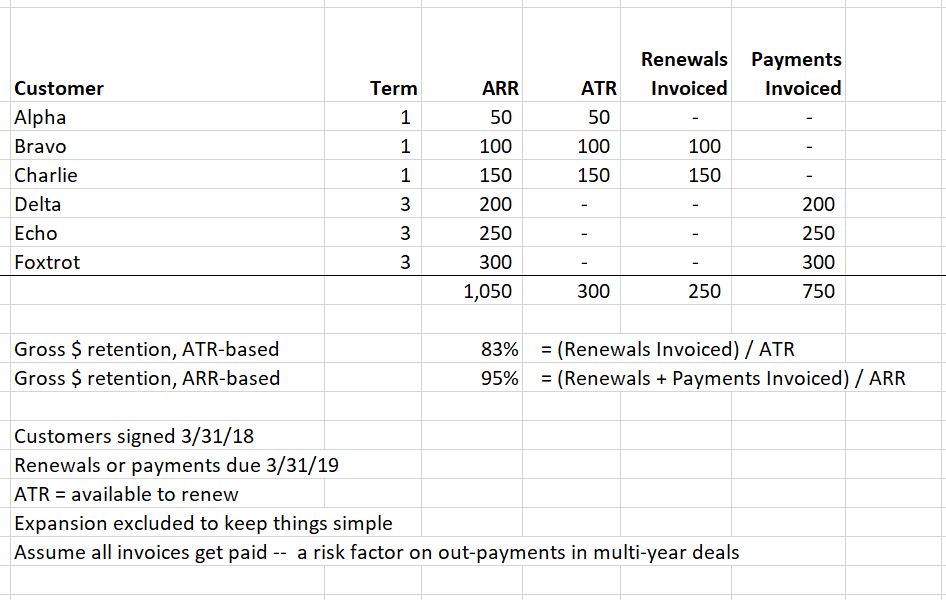 This is a case that feels a little bit wrong both ways.  Including the payments uplifts the rate by mixing involuntary payments with voluntary renewals; to the extent you want to use the rate as a satisfaction indicator, it will be over-stated [5].  However, excluding the payments seems to fail to credit the company with the auto-renewing nature of multi-year deals.

One thing is clear:  payments certainly cannot be included in any ATR-based rate.  You cannot view making a contractually required payment as the same thing as voluntarily renewing a contract.

Because of prepaid multi-year deals, I have always calculated retention rates two ways:  ATR-based and ARR-based.  The former is supposed to give you an idea of how often, given the chance, people want to renew their contacts.  The latter is supposed to show you, mathematically, what’s happening to your ARR pool [6].

I have an issue, which is highly subjective, when it comes to out-payments on non-prepaid, multi-year deals:

Philosophically, I can argue that these out-year payments are either “good as in the bank” or I can argue that they’re “basically renewals that will ‘churn’ if the customer is not happy.”  The first argument says to treat them like prepaid multi-year deals and put them in ARR-based retention rates.  The second argument says they’re effectively voluntary renewals and should be counted as such.

In reality, you need to know what happens at your business.

I believe for the vast majority of businesses, customers honor the contracts and we should treat them like prepaid, multi-year deals in ARR-based rates — and you should always publish in parallel ATR-based rates, so people can see both.  However, if your company is an outlier and 10% of those payments are never collected, you’re going to need to look at them differently – perhaps like renewals because that’s how they’re behaving.  Or get better lawyers.  Or stop doing non-prepaid, multi-year deals because, for whatever reason, your customers are not honoring the commitment they made in exchange for you to give them a price lock.

[3] Or, really, Accounts Receivable but that doesn’t sound as funny.

[4] I’d argue that when you define your customer success process that you should treat these two customers identically.  Whether it’s a payment or a renewal, in a good customer success process you should constantly monitor customer progress with the hope that the renewal (or the payment) is not some big decision, but merely incidental.  (“Yes, of course, we want to keep using the software – is it just a payment year or do we need to renew the contract?”)  This might increase your cost to renew a bit – because you’ll be paying CSMs or renewals reps to do collection work that could theoretically have been done by Accounts Receivable – but it’s still the right answer if you want to maximize ARR.

[5] While payment does not necessarily indicate satisfaction, it probably does indicate the absence of intense dissatisfaction.

[6] e.g., I’d use the the churn rate (1 minus the retention rate) as the discount rate in a present value calculation.