Thoughts on the Coupa S-1

It’s been a while since I dove into an S-1 and while I almost never get all the way through, here we go with another quick romp through a recent S-1.

But, remember the average SaaS business, per research from my friends at JMP, has negative operating margins at IPO time:  the median is -21% and the mean -36%.   So cheap jabs aside, Coupa is running a bit on the high side and, more importantly, in a time where I thought the markets were demanding better profitability than in the past.  That’s the interesting part.  From an operating margin perspective, Coupa is looking like a typical IPO in a market that was supposedly setting a higher bar.

Coupa’s most recent $80M private round put it in unicorn status (i.e., meaning that it was raised at a $1B+ valuation).

Normally that might suggest a reverse split prior to IPO (as Talend recently did, an eight-for-one) but since I can’t find any evidence to suggest that, I’ll have to assume that Coupa and its bankers are bullish on valuation.  Otherwise, if I’ve got the right share count, any valuation less than about $1.8B will put them in single-digit stock price territory (which is the condition companies do reverse splits to avoid).

Highlights from the first pages of the S-1:

Now, let’s look at the income statement, which I’ve cleaned up and color-highlighted. 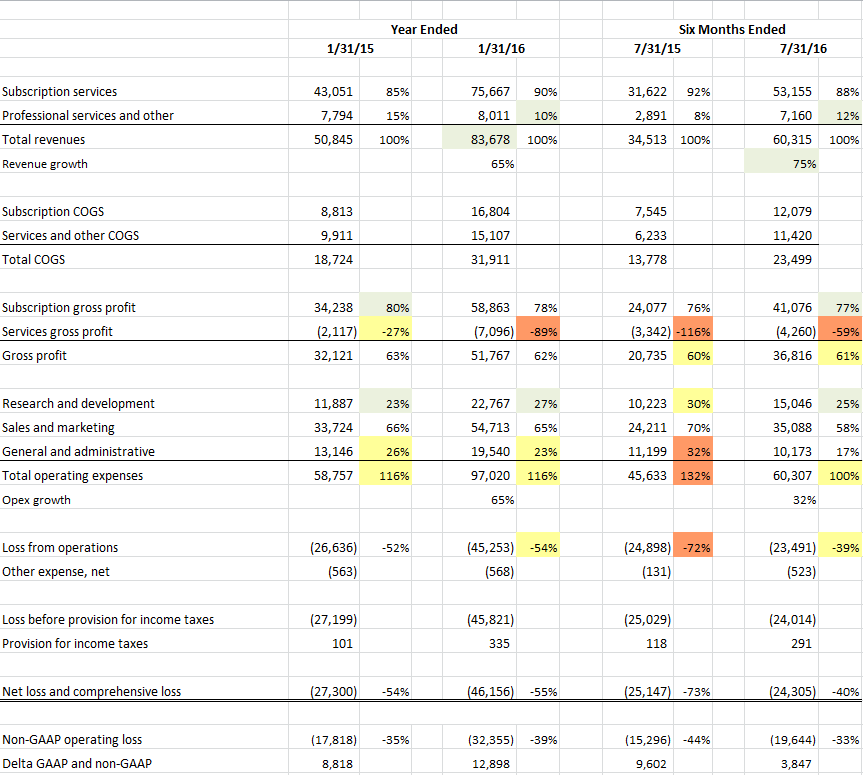 Back to highlights from the S-1 body copy:

Here are the quarterly numbers; things look pretty consistent except for 2QF15, where among other things, they had $7.5M in stock-based compensation expense.

Let’s take a closer look at the unicorn round:

Be sure to read my disclaimers.