Are We Due for a SaaSacre?

I was playing around on the enterprise comps [1] section of Meritech‘s website today and a few of the charts I found caught my attention.  Here’s the first one, which shows the progression of the EV/NTM revenue multiple [2] for a set of 50+ high-growth SaaS companies over the past 15 or so years [3]. 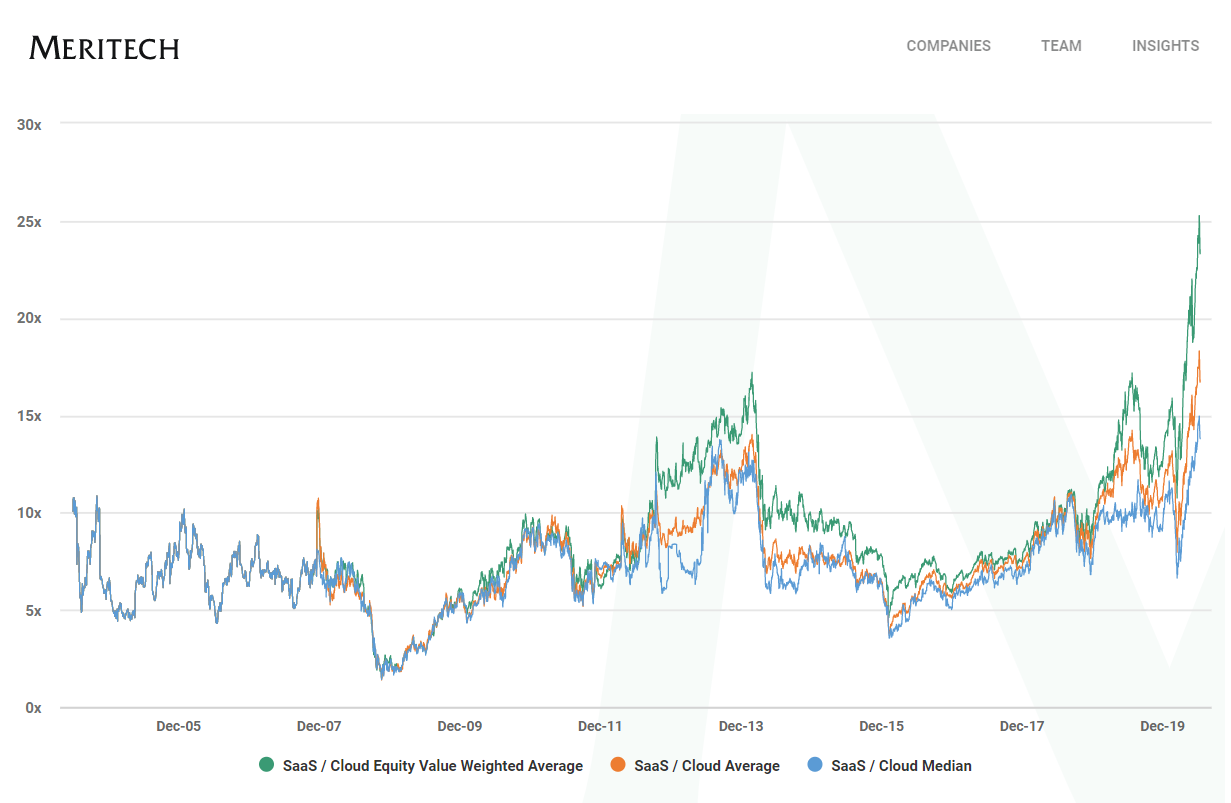 If you believe in regression to the mean [5], that means you believe the multiples are due to drop back to the 5-10 range over time.  Since mean reversion can come with over-correction (e.g., 2008, 2015) it’s not outrageous to think that multiples could drop towards the middle or bottom of that range, i.e., closer to 5 than 10 [6].

Ceteris paribus, that means the potential for a 33% to 66% downside in these stocks. It also suggests that — barring structural change [7] that moves baseline multiples to a different level — the primary source of potential upside in these stocks is not continued multiple expansion, but positive NTM revenue surprises [8].

I always love Rule of 40 charts, so the next fun chart that caught my eye was this one. 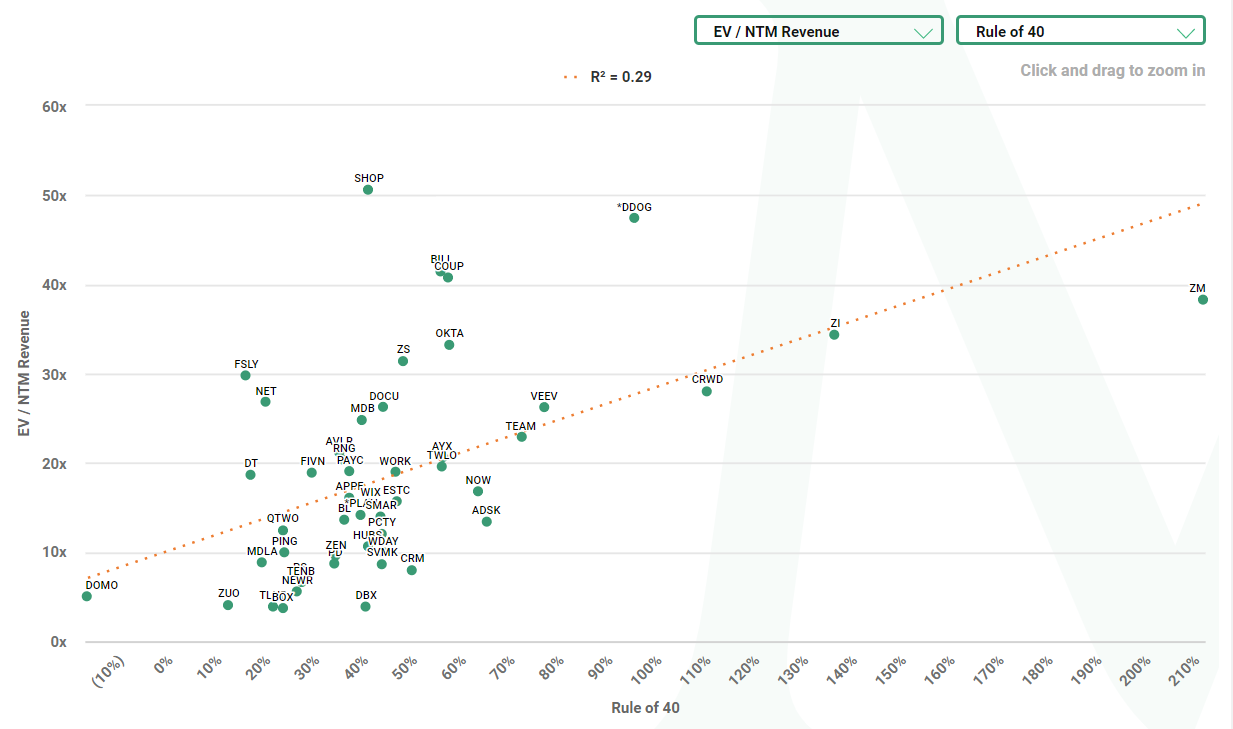 While this chart doesn’t speak to valuations over time, it does speak to the relationship between a company’s Rule of 40 Score and its EV/NTM revenue multiple.  Higher valuations primarily just shift the Y axis, as they have done here, uplifting the maximum Y-value by nearly three times since I last blogged about such a chart [9].  The explanatory power of the Rule of 40 in explaining valuation multiple is down since I last looked, by about half from an R-squared of 0.58 to 0.29.  Implied ARR growth alone has a higher explanatory power (0.39) than the Rule of 40.

To me, this all suggests that in these frothy times, the balance of growth and profit (which is what Rule of 40 measures) matters less than other factors, such as growth, leadership, scarcity value and hype, among others.

Finally, to come back to valuation multiples, let’s look at a metric that’s new to me, growth-adjusted EV/R multiples. 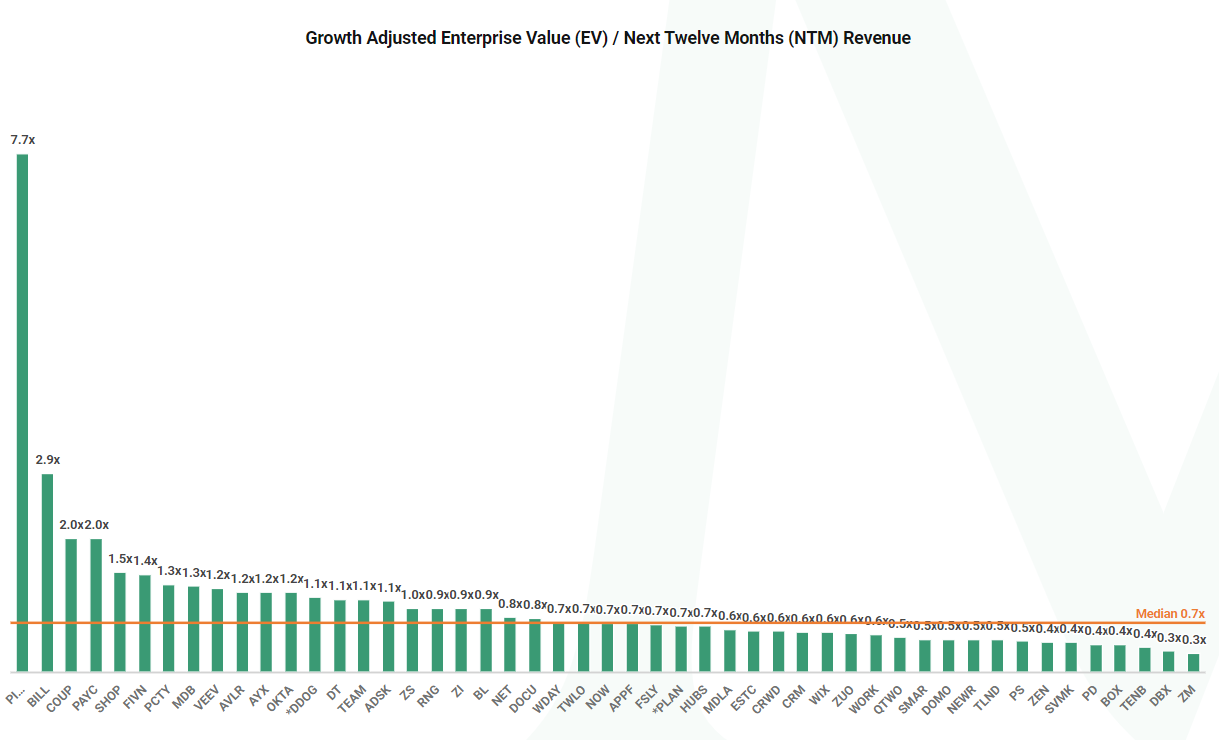 This is a cool metric.  I like financial metrics that normalize things [11].  I’m surprised I’ve not seen someone do it to EV/R ratios before.  Here’s an interesting observation I just made using it:

The other thing the observant reader will notice is that in both those pseudo-random yet nevertheless realistic examples, the professionals were paying 0.2.  The public market median today is 0.7.

See here for the original charts and data on the Meritech site.

Disclaimer:  I am not a financial analyst and do not make buy/sell recommendations.  I own positions in a wide range of public and private technology companies.  See complete disclaimers in my FAQ.

[4] As are most stock indexes. See here for more.

[5] And not everybody does.  People often believe “this time it’s different” based on irrational folly, but sometimes this time really is different (e.g., structural change).  For example, software multiples have structurally increased over the past 20 years because the underlying business model changed from one-shot to recurring, ergo increasing the value of the revenue.

[6] And that’s not to mention external risk factors such as pandemic or election uncertainty.  Presumably these are already priced into the market in some way, but changes to how they are priced in could result in swings either direction.

[7] You might argue a scarcity premium for such leaders constitutes a form of structural change. I’m sure there are other arguments as well.

[10] In English, to the extent you’re paying for EV/R multiple in order to buy growth, Zoom buys you 7x more growth per EV/R point than Coupa.

[11] As an operator, I don’t like compound operational metrics because you need to un-tangle them to figure out what to fix (e.g., is a broken LTV/CAC due to LTV or CAC?), but as investor I like compound metrics as much as the next person.

An Update on the SaaS Rule of 40

Thanks to the folks at Piper Jaffray and their recently published 2018 Software Market Review, we can take a look at a recent chart that plots public software company enterprise value (EV) vs. Rule of 40 (R40) score = free cash-flow margin + revenue growth rate.

As a reminder, the Rule of 40 is an industry rule of thumb that says a high-growth SaaS company can burn as much cash as it likes in order to drive growth — as long as its growth rate is 40 percentage points higher than its free cashflow margin.  It’s an attempt at devising a simple rule to help software companies with the complex question of how to balance growth and profitability.

Let’s take a look at Piper’s chart which plots R40 score on the X axis and enterprise value (EV) divided by revenue on the Y axis.  It also plots a presumably least squares fit line through the data points. 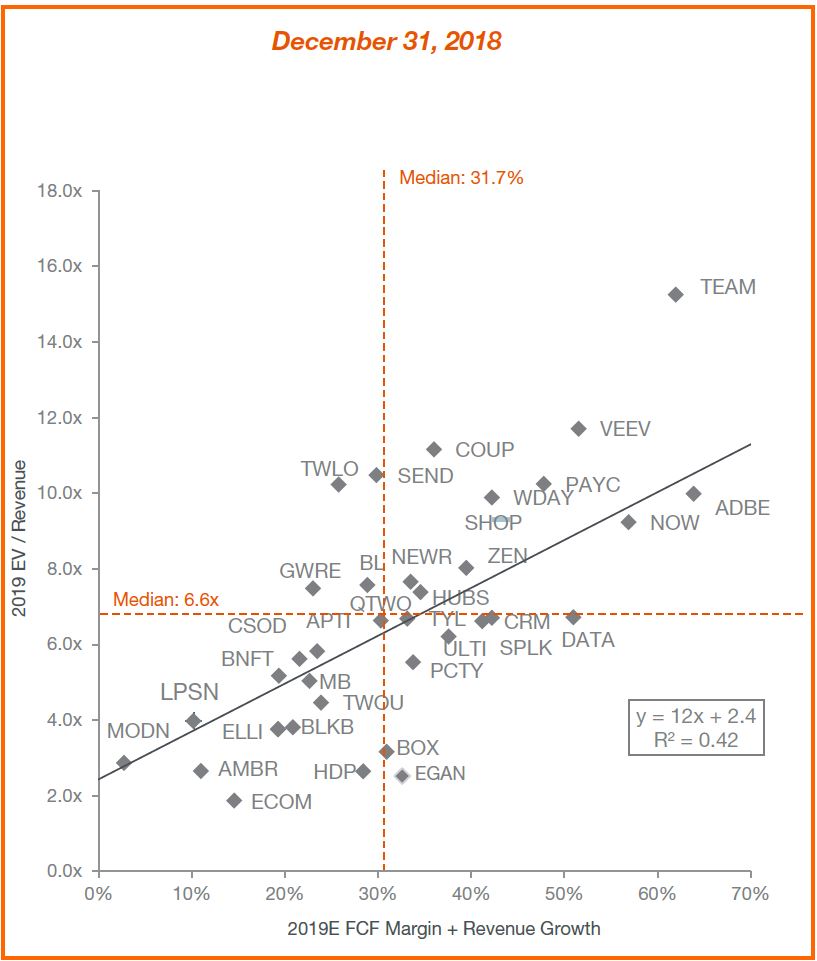 A few nerdier things of note:

I’ll be doing some work in the next few months to try and get better data on R40 trajectory into an IPO.  My instinct at this point is that many companies target R40 compliance too early, sacrifice growth in the process, and hurt their valuations because they fail to deliver high growth and don’t get the assumed customer acquisition cost efficiencies built in the financial models, which end up, as one friend called them, spreadsheet-induced hallucinations.

Below please find the slides from the presentation I gave today at SaaStr 2018, about which I wrote a teaser blog post last week.  I hope you enjoy it as much as I enjoyed making it.

I hope to see everyone next year at SaaStr — I think it’s the preeminent software, SaaS, and startups conference.