The Two Dimensions of Startup Performance

When it comes to evaluating a startup’s performance, I think there are two key, orthogonal questions that need to be examined:

Growth is the primary driver of value creation in a software startup.  I’m not going to quantify what is good vs. bad growth here – it’s a function of too many other variables (e.g., state of market, stage of startup).  For a seed stage company 100% growth (e.g., from $200K to $400K in ARR) is not particularly good, whereas 40% growth off $150M is quite strong.  So, the first question is — given the company’s size and situation — is it delivering good growth?

You can combine these two dimensions into a quadrant. 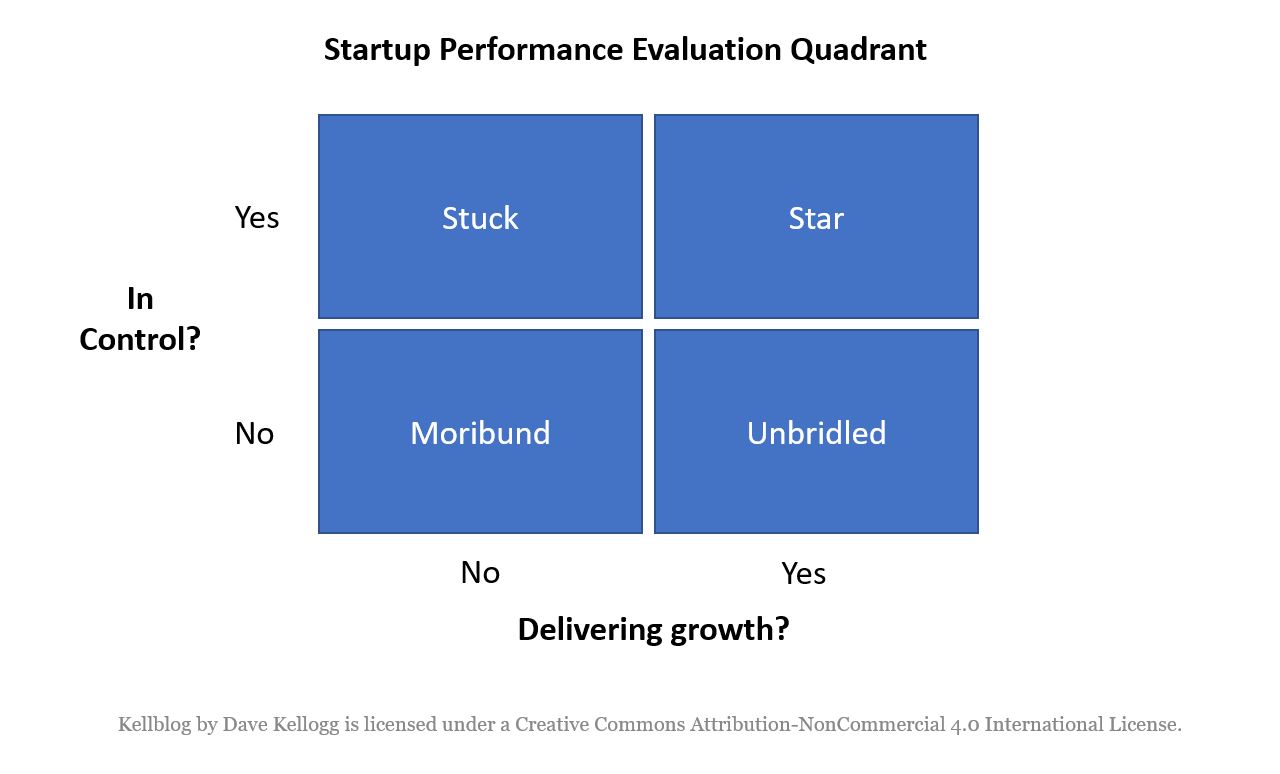 Let’s take a look at companies in each of these quadrants, describe the situation they’re in, and offer some thoughts on what to do.

Moribund Startups
Companies that are moribund are literally on death’s door because they are not creating value through growth and, worse yet, not even in control of their business.  They make annual plans that are too aggressive and continually miss the targets set within them.  Worse yet, they also miss quarterly forecasts, forecasting sales of 100 units in week 3, 80 units in week 12, and delivering sales of only 50 units when the quarter is done.  This erodes the board’s faith in management’s execution and makes it impossible for the company to manage expenses and cash.  Remember Sequoia founder Don Valentine’s famous quote:

“All companies go out of business for the same reason.  They run out of money.” — Don Valentine, Sequoia Capital

While there may be many reasons why a moribund company is not growing, the first priority needs to getting back in control of the business:  setting realistic annual operating plans, achieving them, and having reliable early-quarter (e.g., week 3) forecasts for sales, expense, and cash burn.  I think in their desperation to grow too many moribund startups fail to realize that getting back in control should be done before trying to rejuvenate growth and thus die doing neither.

Put differently, if you’re going to end up delivering sub-par growth, at least forecast it realistically so you will still be in control of your business and thus in a far better position to either turnaround operations or pivot to a better strategic place.  Without control you have nothing, which is what your business will soon be worth if you don’t regain it.

Stuck Startups
Stuck companies face a different set of problems.  The good news is that they are in control of the business:  they make and hit their plans, they come in at or above their forecasts.  Thus, they can manage their business without the risk of suddenly running out of cash.  The bad news is that they’re not delivering sufficient growth and ergo not creating value for the shareholders (e.g., investors, founders, and employees).  Stuck companies need to figure out, quickly, why they’re not growing and how to re-ignite growth.

Possible reasons for stalled growth include:

Stuck companies need to figure out, with as much honesty as possible with themselves, their customers, and their prospects, why they are stuck and then take appropriate steps to fix the underlying causes.  In my opinion, the hard part isn’t the fixes – they’re pretty obvious once you admit the problems.  The hard part is getting to the unpleasant truth of why the company is stuck in the first place. [2]

Unbridled Startups
Like Phaeton driving his father’s chariot [3], the unbridled startup is growing fast, but out of control, and thus risks getting too close to the Sun and burning up or simply smashing into the ground.  Unbridled startups typically are delivering big growth numbers – but often those big numbers are below the even bigger numbers in their aggressive annual operating plan.  The execs dismiss the plan as irrelevant and tell the board to look at growth and market share.  The board looks at the cash burn, noting that the management team — despite delivering amazing growth — is often still under plan on sales and over plan on expenses, generating cash burn that’s much larger than planned.

If the growth stops, these companies burn up, because they are addicted to high cash burn and can suddenly find themselves in the position of not being able to raise money.  So to keep the perpetual motion machine going, they’ll do almost anything to keep growing.  That might include:

Remember that once the Halo is lost, it’s virtually impossible to get back so companies and executives will do almost anything to keep it going.  In some cases, they end up crossing lines that get the business in potentially serious trouble.  [5]

Unbridled companies need to bring in “adult supervision,” but fear doing so because they worry that the professional managers they’ll bring in from larger companies may kill the growth, driven by the company’s aggressive, entrepreneurial founders.  Thus, the board ends up in something of a waiting game:  how long do we bet on the founding/early team to keep driving crazy growth – even if it’s unbridled – before we bring in more seasoned and professional managers?  The smart part about this is realizing the odds of replacing the early team without hurting growth are low, so sometimes waiting really is the best strategy.  In this case, the board is thinking, “OK let’s give this [crazy] CEO one more year” but poised to terminate him/her if growth slows.

The transition can be successfully pulled off – it’s just hard and risky.  I’d argue MongoDB did this well in 2014.  But I’d argue that Anaplan did it not-so-well in 2016, with a fairly painful transition after parting ways with a very growth-oriented CEO, leaving the top job open for nearly 9 months [6].

So, the real question for unbridled companies is when to bridle them and how to do so without killing the golden goose of growth.

Star Startups
There’s not much to say about star startups other than if you’re working at one, don’t quit.  They’re hard to find.  They’re great places to learn.  And it’s sometimes easy to forget you’re working at a star.  I remember when I joined Business Objects.  The company had just gone public the prior year [7], so I had the chance to really dig into their situation by reading the S-1.  “This place is perfect,” I thought, “20-something consecutive quarters of profitable growth, something like only $4M in VC raised, market share leadership, a fundamental patented technology, and a great team — I’m critical as heck and I can’t find a single thing wrong with this place.  This is going to be my first job at a perfect company.”

(Which is an excellent topic for any startup strategy offsite.)

Notes
[1] One trick I use is to assume that, by default, we’re average in all regards.  If we’re hiring the same profiles, using the same comp plans, setting the same quotas, doing the same onboarding, providing the same kit, then we really should be average:  it’s the most likely outcome.  Then, I look for evidence to find areas where we might be above or below.  This is quite different from a vigilante board deciding “we have a bad sales organization” because of a few misses (or a personal style mismatch) and wanting to immediately replace the VP of sales.  I try to slow the mob by pointing out all the ways in which we are normal and then ask for evidence of areas where we are not.  This helps reduce the chance of firing a perfectly good VP of sales when the underlying problem is product, pricing, or competition.

[2] And that’s why they make high-priced consultants – a shameless plug for my new Dave Kellogg Consulting business.

[5] I seem to have a knack to end up competing with companies who do – e.g., Oracle back in the late 1980s did some pretty dubious stuff but survived its comeuppance with $200M in financing from Nippon Steel (which was a lot of money, back in the day), MicroStrategy in 2000 got itself into trouble with reports of inflated earnings and had to pay nearly $100M in settlements (along with other constraints), Fast Search and Transfer managed to get acquired by Microsoft for $1.2B in the middle of an accounting scandal (and were even referred to by some as the “Enron of Norway”) and after its $11B acquisition by HP, Autonomy was charged with allegations of fraud, some of which are still being litigated.

[6] Yes, you can argue it’s been a successful IPO since then, so the transition didn’t hurt things and perhaps eventually had to happen.  But I’m also pretty sure if you asked the insiders, they would have preferred that the transition went down differently and more smoothly.

[7] I was employee number 266 and the company was already public.  My, how times were different back then.