How to Lead a Strategic Board Discussion

Have you ever been to a board meeting where 60 minutes were allocated on the agenda for discussion of a strategic topic?  What happened in that session?

This happens a lot.  Execs who dysfunctionally view survival as the goal of a board meeting might be happy with this outcome.  Think:  “we survived another one; now, let’s get back to work.”

For those execs, however, who actually want to both tap into the board’s expertise and build board-level consensus on a strategic topic, this is a terrible outcome.  No expertise was tapped.  No consensus was built (except perhaps that the company doesn’t run good board meetings).  So what went wrong and what should we do about it?

What Goes Wrong in Strategic Board Discussions
Startup boards are a tough audience.  They are homogenous in some ways:  everyone is typically smart, outspoken, successful, and aggressive [1].  That means leading any discussion is cat-herding.

But, when it comes to strategic discussions, the board is heterogenous in three critical dimensions [2]:

Startup boards are typically VC-dominated because, as a startup goes through the A, B, C, D series of funding rounds, it typically adds one VC board member per round [3].  Thus the typical, sub-$100M [4] startup board has 1-2 founders, one VC for each funding round [5], and one or possibly two independents.

Patagonia vests [6] aside, not all VCs are alike.  When it comes to operating experience, VCs generally fall into one of three different categories [7]:

Independent board members come in different flavors as well:

Now, imagine having a deep conversation about {multi-cloud, serverless, re-architecture, UI/UX, positioning, pricing, branding, ABM, PLG, company strategy, category consolidation, international expansion, channels} with a group consisting of two product-oriented company founders, three VCs (one deep, one moderate, and one light in operating experience), and two independent directors (one former CEO with a sales background and the other a former CFO).

As the saying goes, “you can’t fix what you can’t see.”  Hopefully in this part of the post we’ve shined a bright light on the problem.  You want to discuss an inherently difficult issue (otherwise it wouldn’t have made the agenda).  You’re working with one heck of heterogeneous group. And, for the cherry on top, most of the group members are type-A personalities.  No wonder these sessions are hard to lead [9].

How To Lead a Strategic Board Discussion
Since this exercise is almost a Kobayashi Maru, sometimes the smartest strategy is change the rules.  Rather than teeing up an impossible discussion, instead propose to create a working group of those members who are most interested (and presumably expert) in the chosen topic.  Team those board members with the relevant executive staff, run a series of meetings that dive deep into the topic, and then report back into the larger group. Sometimes, as the WOPR computer concluded in War Games, the only wining move is not to play.

The benefits of these working groups are many:

That said, once in a while you do need to lead such a discussion, so in that situation what should you do?  Do these five things:

Remember if you’re clear on the goal — to have a good discussion — and you build the deck and lead the group to stay focused on that goal, you might not arrive at an easy decision in 60 minutes, but you will indeed have delivered on what you promised — a good, board-level discussion about a complex issue.

[1]  As is well known, they are also often homogenous in other, undesirable ways (e.g., race, gender) that I will acknowledge but not address as it’s not the purpose of this post.  For more on this topic, you can start here.

[2]  This is why pattern-matching across portfolio companies, executive staffing, and compensation are popular topics with boards.  They are safe topics, in the sense that everyone gets to participate in the discussion.  On the other extreme, it’s why product and major engineering decisions get so little time relative to their importance.  Go-to-market lies somewhere in the middle.

[3]  This is somewhat less true in today’s markets because (a) many VCs are more willing to invest without taking a board seat and (b) some, more indexing-oriented, later-stage VCs do not as a matter of practice want board seats because their business model is about deploying large amounts of capital across a broad range of companies.

[4]  Around $100M they may typically start reconfiguring in preparation for an upcoming IPO.

[6]  A little satire from Fortune and/or my favorite scene from The Internship, which is about academic elitism in Silicon Valley in general and not VC in specific.

[7]  These buckets are definitionally stereotypes with all attached strengths and weaknesses.  While I was tempted to write “typically” and “often” before every sentence, I elected not to for word parsimony.  Place accept in the spirit given.

[8]  I add this colorful detail, which will invariably be wrong a lot, both for fun and to help paint the picture.  In each instance, I know at least one person, and usually more than one person, who fits this profile.  But no, I don’t always ask people what clubs they were in during high school.  To ensure contemporary naming (e.g., back when I was a member, it was called “computer club”), the club names come from the list at the high school that most of my children attended.

[9]  This why boards frequently talk about “safer” topics (in the sense that everyone can more easily participate) such as pattern matching across companies, executive staffing, and compensation — and a key reason why major engineering and product decisions get low airtime relative to their importance on many boards.

[10]  One of the smartest things e-staffers can do is to build relationships with their VC board members.  This isn’t always easy — everyone is pressed for time, sometimes it can make the CEO uncomfortable, and it’s not strictly necessary — but five years later when the VC is looking for a CXO for a hot portfolio company, whether you get the call or not may well be a function of that relationship or lack thereof.

Knowing that CFO transformation is one of my favorite subjects (having run a planning company for six years) the folks at Sage invited me to moderate a set of panels at their San Francisco and New York media events this week.  Sage is launching the results of a research study where they surveyed over 500 CFOs of primarily medium-size businesses about the ongoing transformation of the CFO role, and their outlook on topics ranging from the evolution of finance to advanced automation (robotic process automation, or RPA), artificial intelligence (AI), and machine-learning.

In addition to a fine selection of customers for each panel, I was pleased to have two thought leaders joining me as well: Rob Kugel from Ventana Research, and Jack McCullough, president of the CFO leadership council and author of Secrets of Rockstar CFOs.  Sage CTO Aaron Harris even helped out with a few questions after giving his presentation that helped tee-up the panel.

Among the more interesting findings:

In addition to a  great joke (question:  “how do you know when you’re talking to an extroverted accountant?”  answer:  “they’re the one looking at your shoes when they’re talking.”) we heard a few colorful stories as well, my favorite from Jack who at age 19 was hauled into the CFO’s office for questioning as to why Jack referred to him as the “CFNo.”  Expecting to be fired from his first job, Jack was instead thanked, “that’s quite a compliment,” said the CFO 1.0, “I’m pleased to hear you’ve been calling me the CFKnow.”  Jack dodged a bullet on that one, for sure.

Thanks to Sage for inviting me and best of luck on the continuing journey to transform finance.  You can get a copy of the full Sage CFO 3.0 study here.

Thanks to the 700+ folks who attended my keynote address at last week’s Host Analytics World 2015 conference in San Francisco.  We were thrilled with the event and thank everyone — customers, partners, and staff — who made it all possible.

Below is a 76-minute video of the keynote presentation I gave at the event. Enjoy!  And please mark your calendars now for next year’s Host Analytics World — May 9 through May 12, 2016 — in San Francisco.

CFOs: More Strategic Than Ever

I was digging through my reading pile and found this about nine-month-old report by Accenture and Oracle entitled The CFO as Corporate Strategist by Donniel Schulman and David Axson of Accenture.  Those who follow Host Analytics might remember David Axson as he’s spoken at several of our user conferences.  (Note:  the 2015 conference is May 18-21 — save the date!)

The overall theme of the paper is that the traditional “bean counter” positioning of CFOs is as outdated as the hula hoop, with CFOs becoming more strategic over time, and partnering with the CEO to run the company.

Here’s one chart from the report that shows just that: 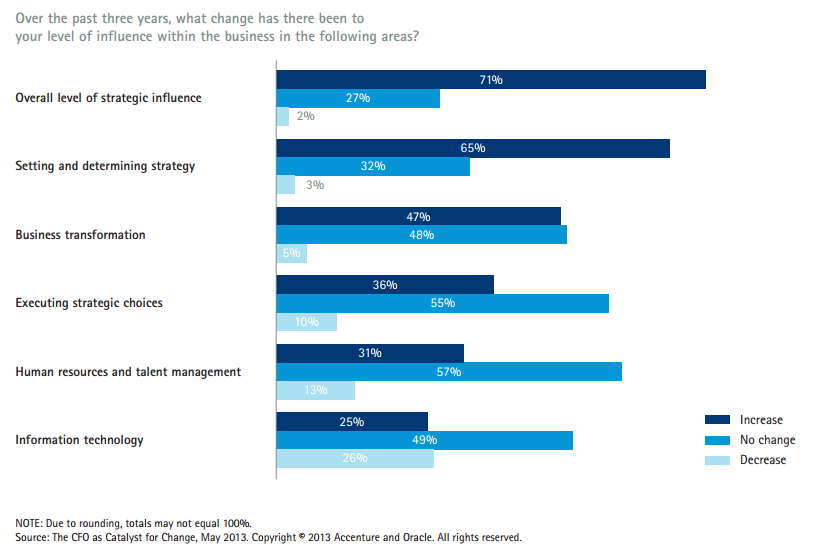 We definitely seeing this trend with our customers at Host Analytics.

As I’ve always said, “CEOs live in the future,” so if CFOs want to partner with them, they are going to de-emphasize a lot of their backwards-looking role and join their CEOs in the future.  This means automating and delegating backwards-looking functions like consolidations and reporting.  And it means getting more involved with both financial planning & analysis (FP&A) and their cousins in the various “ops” teams springing up around the organization — e.g., salesops — who also do lot of planning, modeling, and scenario building.