As the new year approaches, it’s time for another set of predictions, but before diving into my list for 2016, let’s review and assess the predictions I made for 2015.

So, let’s it call it 7.5 out of 10.  Not bad, when you recall my favorite quote from Yogi Berra:  “predictions are hard, especially about the future.”

Before diving into these predictions, please see the footnote for a reminder of the spirit in which they are offered.

1. The great reckoning begins.   I view this as more good than bad because it will bring a return to commonsense business practices and values.  The irrationality that came will bubble 2.0 will disperse.  It took 7 years to get into this situation so expect it to take a few years to get out.  Moreover, since most of the bubble is in illiquid securities held by illiquid partnerships, there’s not going to be any flash crash — it’s all going to proceed in slow motion, expect for those companies addicted to huge burn rates that will need to shape up quickly.  Quality, well run businesses will continue attract funding and capital will be available for them.  Overall, while there will be some turbulence, I think this will be more good than bad.

2. Silicon Valley cools off a bit.  As a result of the previous prediction, Silicon Valley will calm a bit in 2016:  it will get a bit easier to hire, traffic will modestly improve, and average burn rates will drop.  You’ll see fewer corporate buses on 101.  Rents will come down a bit, so I’d wait before signing a five-year lease on your next building.

3. Porter’s Five Forces comes back in style.  I always feel that during bubbles the first thing to go is Porter five force analysis.  What are there barriers to entry on a daily deal or on a check-in feature?  What are the switching costs of going from Feedly to Flipboard?  What are the substitutes for home-delivered meal service?   In saner times, people take a hard look at these questions and don’t simply assume that every market is a greenfield market share grab and that market share itself constitutes a switching cost (as it does only in companies with real network effects). 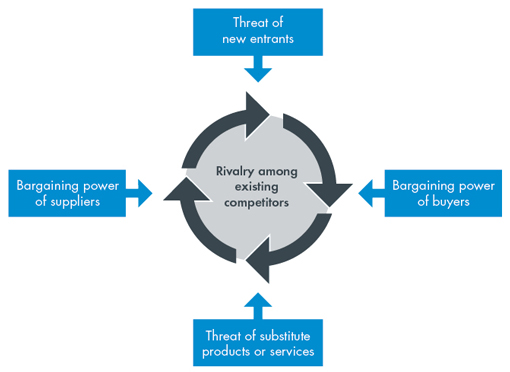 4.  Cyber-cash makes a rise.  As the world becomes increasingly cashless (e.g., Sweden), governments will prosper as law enforcement and taxation bodies benefit, but citizens will increasingly start to sometimes want the anonymity of cash.  (Recall with irony that anonymity helped make pornography the first “killer app” of the Internet.  I suspect today’s closet porn fans would prefer the anonymity of cash in a bookshop to the permanent history they’d leave behind on Netflix or other sites — and this is not to mention the blackmailing that followed the data release in the Ashley Madison hack.)  For these reasons and others, I think people will increasingly realize that in a world where everything is tracked by default, that the anonymity of some form of cyber-cash will sometimes be desired.  Bitcoin currently fails the grade because people don’t want a floating (highly volatile) currency; they simply want an anonymous, digital form of cash.

5.  The Internet of Things (IoT) starts its descent into what Gartner calls the Trough of Disillusionment.  This is not to say that IoT is a bad thing in any way — it will transform many industries including agriculture, manufacturing, energy, healthcare, and transportation.  It is simply to say that Silicon Valley follows a predictable hype cycle and that IoT hit the peak in 2015 and will move from the over-hyped yet very real phase and slide down to the trough of disillusionment.  Drones are following along right behind.

6.  Data science continues to rise as a profession.  23 schools now offer a master’s program in data science.  As a hot new field, a formal degree won’t be required as long as you have the requisite chops, so many people will enter data science they way I entered computer science — with skills, but not a formal degree. See this post about a UC Berkeley data science drop-out who describes why he dropped the program and how he’s acquiring requisite knowledge through alternative means, including the Khan Academy.  Galvanize (which acquired data-science bootcamp provider Zipfian Academy) has now graduated over 200 students.   Apologies for covering this trend literally every year, but I continue to believe that “data science” is the new “plastics” for those who recall the scene from The Graduate. 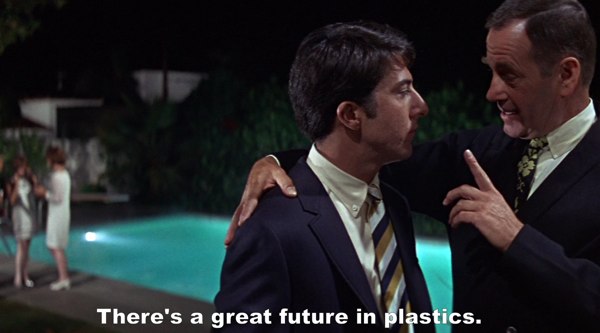 7. SAP realizes it’s an complex, enterprise applications company.  Over the past half decade, SAP has put a lot of energy into what I consider strategic distractions, like (1) entering the DBMS market via the Sybase acquisition, (2) putting a huge emphasis on their column-oriented, in-memory database, Hana, (3) running a product branding strategy that conflates Hana with cloud, and (4) running a corporate branding strategy that attempts to synonymize SAP with simple.

Some of these initiatives are interesting and featured advanced technology (e.g., Hana).  Some of them are confusing (e.g., having Hana mean in-memory, column-oriented database and cloud platform at the same time).  Some of them are downright silly.  SAP.  Simple.  Really?

While I admire SAP for their execution commitment  — SAP is clearly a company that knows how to put wood behind an arrow — I think their choice of strategies has been weak, in cases backwards looking (e.g., Hana as opposed to just using a NoSQL store),  and out of touch with the reality of their products and their customers.

The world’s leader in enterprise software applications that deal with immense complexity should focus on building upon that strength.  SAP’s customers bought enterprise applications to handle very complex problems.  SAP should embrace this.  The message should be:  We Master the Complex, not Run Simple.  I believe SAP will wake up to this in 2016.

Aside:  see the Oracle ad below for the backfire potential inherent in messaging too far afield from your reality.

8.  Oracle’s cloud strategy gets revealed:  we’ll sell you any deployment model you like (regardless of whether we have it) as long as your yearly bill goes up.  I saw a cartoon recently circulated on Twitter which depicted the org charts of various tech megavendors and, quite tellingly, depicted Oracle’s as this: 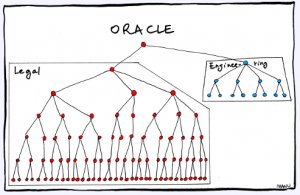 Oracle is increasingly becoming a compliance company more than anything else.  What’s more, despite their size and power, Oracle is not doing particularly well financially.  Per a 12/17/15 research note from JMP,

While Oracle’s cloud marketing has been strong, the reality is that cloud represents only 7% of Oracle’s total revenue and that is after Oracle has presumably done everything they can to “juice” it, for example, by bundling cloud into deals where, I’ve heard, customers don’t even necessarily know they’ve purchased it.

So while Oracle does a good job of bluffing cloud, the reality is that Oracle is very much trapped in the Innovator’s Dilemma, addicted to a huge stream of maintenance revenue which they are afraid to cannibalize, and denying customers one of the key benefits of cloud computing:  lower total cost of ownership.  That’s not to mention they are stuck with a bad hardware business (which again missed revenues) and are under attack by cloud application and platform vendors, new competitors like Amazon, and at their very core by next-generation NoSQL database systems.  It almost makes you feel bad for Larry Ellison.  Almost.

8.  Accounting irregularities are discovered at one or more unicorns.  In 2015 many people started to think of late-stage megarounds as “private IPOs.”  In one sense that was the correct:  the size of the rounds and the valuations were very much in line with previous IPO norms.  However, there was one big difference:  they were like private IPOs — but without all the scrutiny.  Put differently, they were like an IPO, but without a few million dollars in extra accounting work and without more people pouring over the numbers.  Bill Gurley did a great post on this:  Investors Beware:  Today’s $100M+ Late-Stage Private Rounds are Very Different from an IPO.  I believe this lack of scrutiny, combined with some people’s hubris and an overall frothy environment, will lead to the discovery of one or more major accounting irregularity episodes at unicorn companies in 2016.  Turns out the world was better off with a lower IPO bar after all.

9. Startup workers get disappointed on exits, resulting in lawsuits.  Many startup employees work long hours predicated on making big money from a possible downstream IPO.  This has been the model in Silicon Valley for a long time:  give up the paycheck and the perks of a big company in exchange for sleeves-up work and a chance to make big money on stock options at a startup.  However, two things have changed:  (1) dilution has increased because companies are raising more capital than ever and (2) “vanity rounds” are being done that maximize valuation at the expense of terms that are bad for the common shareholder (e.g., ratchets, multiple liquidation preferences).

In extreme cases this can wipe out the value of the common stock.  In other cases it can turn “house money” into “car money” upon what appears to be a successful exit.  Bloomberg recently covered this in a story called Big IPO, Tiny Payout about Box and the New York Times in a story about Good Technology’s sale to BlackBerry, where the preferred stock ended up 7x more valuable than the common.  When such large disparities occur between the common and the preferred, lawsuits are a likely result. 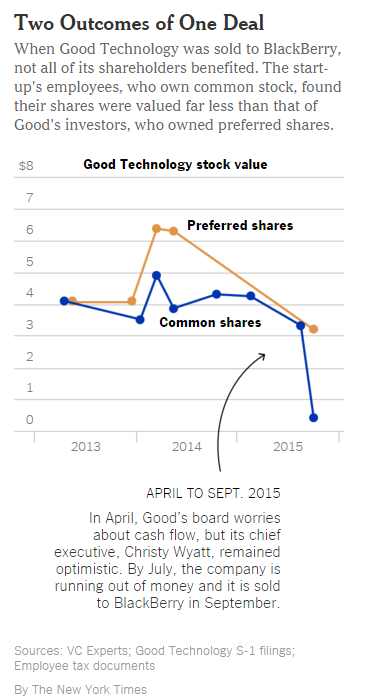 Many employees will find themselves wondering why they celebrated those unicorn rounds in the first place.

10.  The first cloud EPM S-1 gets filed.  I won’t say here who I think will file first, why they might do so, and what the pros and cons of filing first may be, but I will predict that in 2016 the first S-1 gets filed for a cloud EPM vendor.  I have always believed that cloud EPM is a great category and one that will result in multiple IPOs — so I don’t believe the first filing will be the last.  It will be fun to watch this trend and get a look at real numbers, as opposed to some of the hype that gets circulated.

11.  Bonus:  2016 proves to be a great year for Host Analytics.  Finally, I feel great about the future for Host Analytics and believe that 2016 will be a wonderful year for the company.  We have strong products. We have amazing customers.  We have built the best team in EPM.  We have built a strong partner network.  We have great core applications and exciting, powerful new capabilities in modeling. I believe we have, overall, the best, most complete offering in cloud EPM.

Thanks for your support in 2015 and I look forward to delivering a great 2016 for our customers, our partners, our investors, and our team.

[1]  These predictions are offered in the spirit of fun and I have no liability to anyone acting or not acting on the content herein.  I am not an oracle, soothsayer, or prophet and make no claim to be.  Please enjoy these predictions, please let them provoke your thoughts, but do not use them as investing or business consulting advice.  See my FAQ for additional disclaimers.

6 responses to “Kellblog Predictions for 2016”