But, most of all, it has some great charts on the Rule of 40 [1] that I want to present and discuss here.  Before doing that, I must note that I drank today’s morning coffee reading Alex Clayton’s CloudStrike IPO breakdown, a great post about a cloud security company with absolutely stunning growth at scale — 121% growth to $312M in Ending ARR in FY19.  And, despite my headline, well in compliance with the Rule of 40.  110% revenue growth + -26% free cashflow margin = 84%, one of the highest Rule of 40 scores that I’ve ever seen [2].  Keep an eye on this company, I expect it should have a strong IPO [3].

However, finding one superstar neither proves nor disproves the rule.  Let’s turn to the Battery data to do that.

When discussing the Rule of 40, most financial analysts make one of two plots.

But that thing has always bugged me is that nobody does the linear regression against both the Rule of 40 score and revenue growth.  Nobody, until Battery.  Here’s what it shows.

First, let’s look at the classic Rule of 40 regression.  Recall that R-squared is a statistical measure that explains the dependence of the dependent variable (in this case, EV multiple) on the independent variable (Rule of 40 score).  Here you can see that about 58% of the variation in enterprise value multiple is explained by Rule of 40 score.  You can intuit that by looking at the dots relative to the line — while there is clearly some linear correlation between the data, it’s a long way from perfect (i.e., lots of dots are pretty far from the line).  [6] 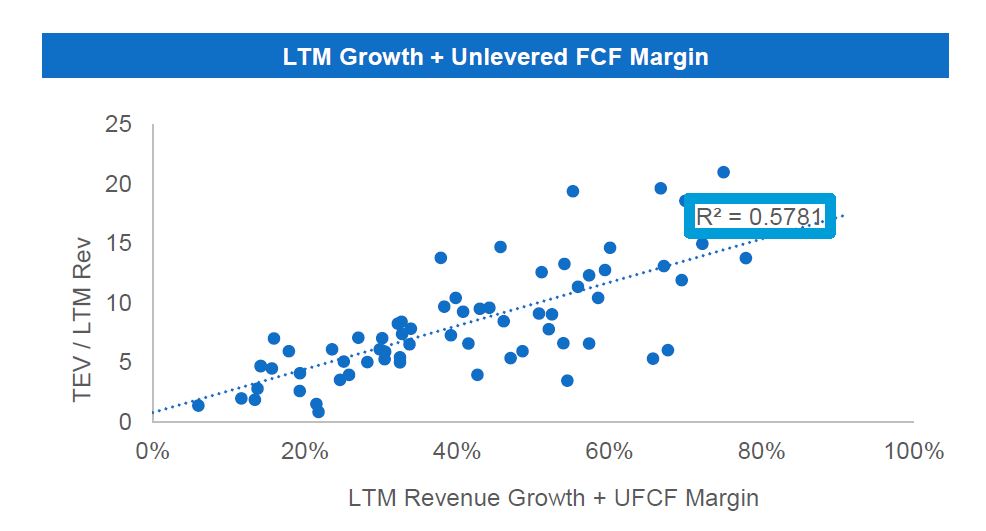 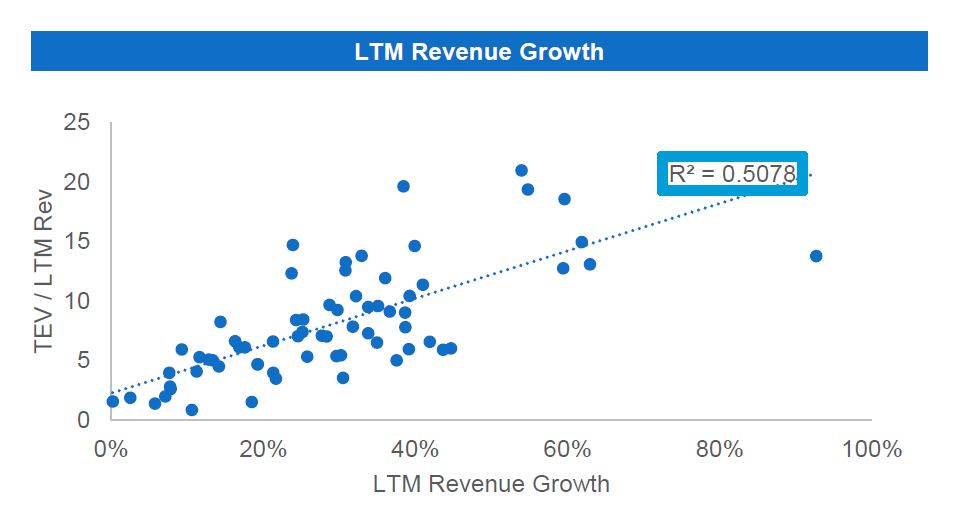 In the vein, for some real fun let’s look at how this relationship has changed over time.  The first thing you’ll notice is that pre-2012 both last twelve month (LTM) revenue growth and the Rule of 40 had far weaker explanatory power, I suspect because profitability played a more important role in the equation.  In 2012, the explanatory power of both metrics doubled.  In 2015 and 2016 the Rule of 40 explained nearly 20% more than revenue growth alone.  In 2017 and 2018, however, that’s dropped to 7 to 8%.

Thanks to the folks at Battery for producing and sharing this great report. [7]

Notes
[1] Rule of 40 score = typically calculated as revenue growth + free cashflow (FCF) margin.  When FCF margin is not available, I typically use operating margin.   Using GAAP operating margin here would result in 110% + -55% = 55%, much lower, but still in rule of 40 compliance.

[2] If calculated using subscription revenue growth, it’s 137% + -26% = 111%, even more amazing.  One thing I don’t like about the fluidity of Rule of 40 calculations, as you can see here, is that depending what might seem small nuances in calculations, you can produce a very broad range of scores.   Here, from 55% to 137%.

[3] To me, this means ending day 1 with a strong valuation.  The degree to which that is up or down from the opening price is really about how the bankers priced the offer.  I am not a financial analyst and do not make buy or sell recommendations.  See my disclaimers, here.

[4] In fact, it’s actually a double bar — first you need to have been successful enough to go public, and second you need to clear the Rule of 40.  Despite a minority of public companies actually clearing this bar, financial analysts are quick to point out the minority who do command a disproportionate share of market cap.

[5] And via the resultant R-squared score, to what extent does the Rule of 40 score explain (or drive) the EV/R multiple?

[6] If R-squared were 1.0 all the dots would fall on the least-squares fit line.

[7] Which continues with further analysis, breaking the Rule of 40 into 4 zones.

This entry was posted in Metrics, Rule of 40, SaaS, Startups, Uncategorized and tagged R40, Software, valuations. Bookmark the permalink.