Are We Growing Fast Enough?

In this post, we’ll take a quick look at three lenses you should look through in considering this question.

The Plan Lens
Every startup has an operating plan that is used to set targets for the company and manage the cash runway.   The first question is always, “what were new bookings as a percent of plan?” and only then do you get the second, “what does that represent in terms of year-over-year growth?” [1] [2]

That order is not accidental and it subtly reveals something important:  plan-relative performance is more important to most boards than absolute performance.  That’s shocking when you think about it because plan-relative performance is at least in part about game theory (i.e., plan negotiation skills) whereas growth is a better measure of raw performance [3].  But it’s true.  When I started as CEO of MarkLogic the seven words the legendary Mike Moritz said to me were not, “grow more quickly than your primary competition,” but instead, “make a plan that you can beat” [4].

The trouble with the plan lens is you can literally go out of business beating plan.  Consider this example:

Your company beats plan every year, performing in the 105% to 110% of plan range and growing at a respectable 40%.  The problem is you’ve lost the market.  You had a competitor who was more aggressive, grew faster — who knows maybe even missing their plan every now and then — and in year 7, they end up 3+ times your size, are seen as the clear market leader, win more deals because of that, command a market leadership premium in their fundraising, and can raise vast sums of money to keep outgrowing you with only modest dilution [5] [6].

Game over.  Startup markets are not won by the timid.

The Benchmark Lens
Now that it’s clear that plan-relative performance is only one lens, you may decide to get some benchmark data to see what kind of growth is normal or good at your scale.  So you grab a copy of OpenView’s benchmarks or the the KeyBanc SaaS survey.  Looking at KeyBanc, you’ll find this chart. 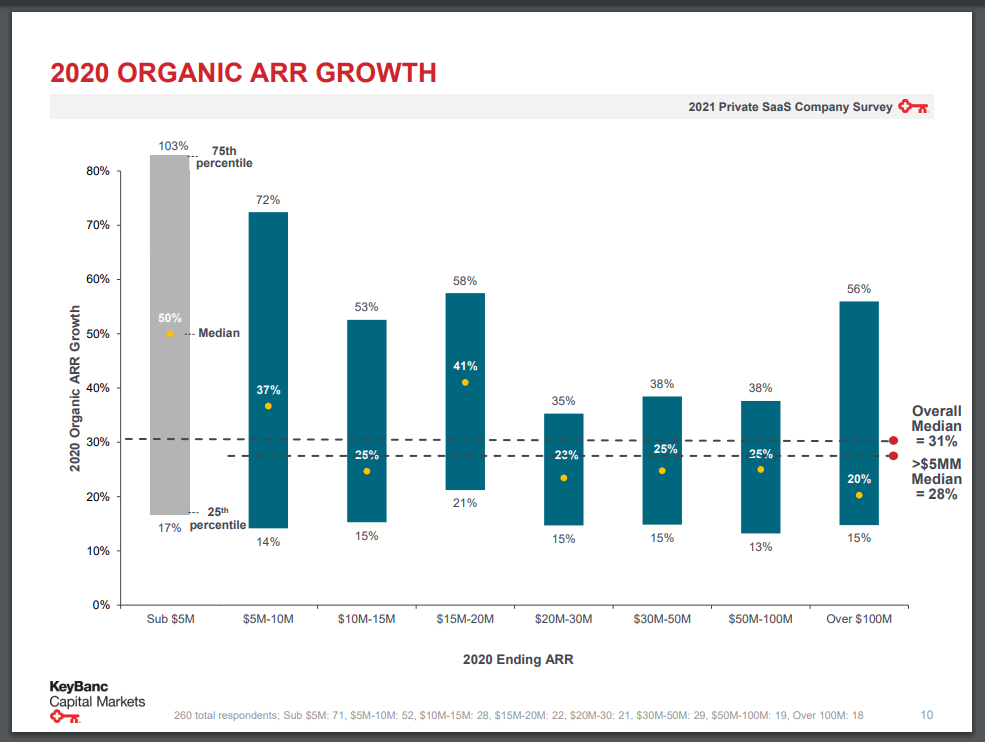 While I’m a big believer in gathering such data and using it for context, benchmarks alone are not enough.  In our example, we look at the $30-50M size column, see 38% as the 75th percentile cut-off, and feel even better about our 39% growth.  Yes, relative to the universe of private SaaS companies 39% growth at $30-50M scale is top quartile (you can pick up your participation trophy on the way out), but what actually matters is your size and relative market share in your target market.

While on a quick glance bankers may tell you, “your numbers look pretty solid,” when they dig into the market and realize that you are only 1/3rd the size of your archrival, they’ll take a sudden and deep interest in positioning — specifically how you position relative to the market leader and whether that story paints you as the market leader in a defensible niche or simply downstream roadkill.

The Market Lens
The most impactful chart I ever made is the one below, which I’d present at QBRs back in the day Business Objects.  Every quarter I’d divide ours and our key competitors’ quarterly revenues by our quarterly revenues, creating a relative size factor where we were definitionally always at 1.0 (the blue line, below).

In this format you can see relative market changes very easily.  Anyone moving up is gaining relative share, anyone moving down is losing it.  Above the blue 1.0 line means they’re bigger than we are, below it means they’re smaller.  The data is fictitious, but you can see that Cognos (COGN) started out bigger than we were but we overtook them.  MicroStrategy (MSTR) posed a real threat for a while and then mostly leveled out.  Brio had some momentum but then lost it.  Because the data was largely available, I could even cut it by major geographic regions.

If I only had one chart to answer the question, “are we growing fast enough?” it would be this one.

Nowadays, with companies going public late in their life cycles, this data usually isn’t available during the first 10-12 years of evolution.  Lacking public data, I’d have my competitive analyst make and maintain a spreadsheet that triangulates revenue using scraps and tidbits from VCs and other sources (e.g., Nathan Latka is remarkably effective at getting spokespeople to spill revenue information) and I’d make a separate sheet that uses headcount from LinkedIn as a proxy for ARR, using the method in this great post by SaaStr’s Jason Lemkin.

Summary
To answer the question, “are we growing fast enough?” you need to look through three lenses:

[1]  So much so that you should proactively include them in any quarterly results summary slide or email.  They shouldn’t have to ask.

[2]  YoY as opposed to sequential (i.e., QoQ) growth because enterprise SaaS is a seasonal business so the YoY comparisons are more meaningful.

[3]  In fact, I believe the best metric would be relative market share (i.e., how are you doing relative to your competition) but that’s hard to get data on (particularly in the private SaaS world) and managers would resist it like the plague.

[4]  I recently found a 642-page collection of his awesome wisdom here.

[6]  The only potential winner at YourCo is the VP of Sales who presumably was a great target negotiator, always kept the bar low, and always beat it — but even they lose when it comes to the value of their equity.

2 responses to “Are We Growing Fast Enough?”