How to Present an Operating Plan to your Board

Finance types on the board might view these as simple canapes served before the meal.  I view them as critical strategic context.  But, either way, the one thing on which everyone can agree is that the numbers are always the main course. Thus, in this post, I’m going to focus on how to best present the numbers in an annual operating plan.

Context is King
Strategic context isn’t the only context that’s typically missing.  A good operating plan should present financial context as well.  Your typical VC board member might sit on 8-10 boards, a typical independent on 2 (if they’re still in an operating role), and a professional independent might sit on 3-5.  While these people are generally pretty quantitative, that’s nevertheless a lot of numbers to memorize.  So, present context.  Specifically:

The last point is critical for several reasons:

Presenting the Plan in Two Slides
To steal a line from Name That Tune, I think I can present an operating plan in two slides.  Well, as they say on the show:  “Dave, then present that plan!”

There are subjective distinctions in play here.  For example, CAC ratio (the S&M cost of a dollar of new ARR) is certainly ARR-related, but it’s also P&L-driven because the S&M cost comes from the P&L.  I did my best to split things in a way that I think is logical and, more importantly, between the two slides I include all of the major things I want to see in an operating plan presentation and, even more importantly, none of the things that I don’t.

Slide 1: The Leaky Bucket of ARR and Related Metrics

Let’s review the lines, starting with the first block, the leaky bucket itself:

The next block has two rows focused on change in the ARR bucket:

The next block looks at new vs. churn ARR growth as well as the mix within new ARR:

The next block focuses on retention rates:

The next block focuses on headcount:

Slide 2: The P&L and Related Metrics 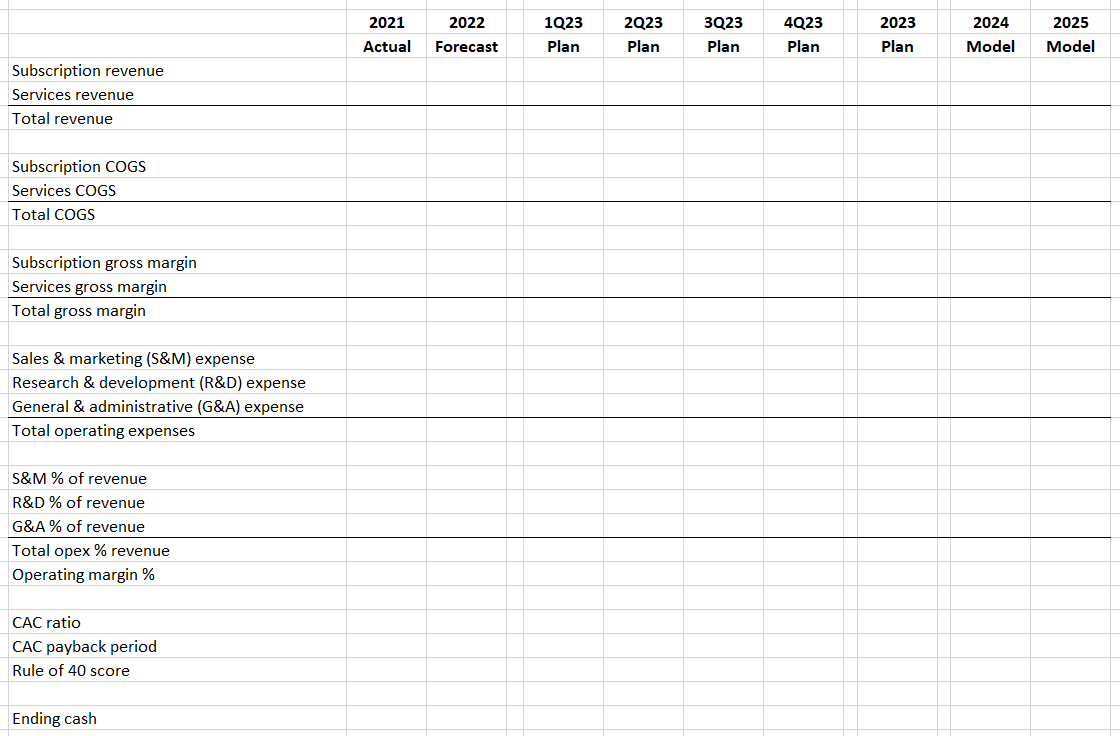 This is a pretty standard, abbreviated SaaS P&L.

The first block is revenue, optionally split by subscription vs. services.

The second block is cost of goods sold.

The third block is gross margin.  It’s important to see both subscription and overall (aka, blended) gross margin for benchmarking purposes.  Subscription gross is margin, by the way, is probably the most overlooked-yet-important SaaS metric.  Bad subscription margins can kill an investment deal faster than a high churn rate.

The fourth block is operating expense (opex) by major category, which is useful for benchmarking.  It’s also useful for what I call glideslope planning, which you can use to agree with the board on a longer-term financial model and the path to get there.

The last block is just one row:  ending cash.  The oxygen level for any business.  You should let this go negative (in your financial models only!) to indicate the need for future fundraising.

While scenarios in the strategy sense are usually driven by strategic planning assumptions (e.g., “cheap oil”), in software they are often just different version of a plan optimized for different things:

Whatever scenarios you pick, and your reasons for picking them, are up to you.  But I want to help you present them in a way that is easy to grasp and compare.

Here’s one way to do that:

I like this hybrid format because it’s pulling only a handful of the most important rows, but laying them out with some historical context and, for each of the three proposed scenarios, showing not only the proposed 2023 plan also the 2024 model associated with it.  This is the kind of slide I want to look at while having a discussion about the relative merits of each scenario.

What’s Missing Here?
You can’t put everything on two slides.  The most important things I’m worried about missing in this format are:

Conclusion
Hopefully this post has given you some ideas on how to better present your next operating plan to your board.  If you have questions or feedback let me know.  And I wish everyone a happy and successful completion of planning season.